Another sweltering day gave way to an afternoon of severe storms, that brought with them flooding, downed trees and power lines and cut a broad swath of power outages around the region.
Listen now to WTOP News WTOP.com | Alexa | Google Home | WTOP App | 103.5 FM
(1/3) 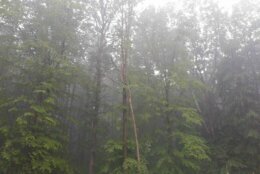 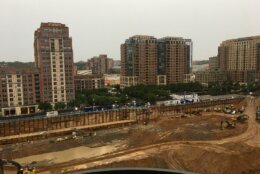 Another sweltering day gave way to an afternoon of severe storms that brought with them flooding, downed trees and power lines and cut a broad swath of power outages around the region.

After storms moved through Northern Virginia, Dominion Energy reported almost 50,000 customers were left without power. Pepco reported over 4,000 customers affected in the wake of the storms.

Peggy Fox with Dominion Energy said there was widespread damage across Northern Virginia, with the bulk of the outages focused in Alexandria.

Fox said that it was not likely that everyone would see the return of services Wednesday. She said repairs could continue into Thursday or even Friday, depending on the full scope of damages.

Trees and wires collapsed onto Lawyers Road in Vienna near Garrett Street. A listener reported the downed power lines managed to ignite a small brush fire despite the heavy rains. No injuries were reported.

The westbound lanes of Democracy Boulevard in Bethesda were closed for several hours, along with part of Beach Drive near Franklin Street, because of downed trees.

Montgomery County Fire and Rescue spokesperson Pete Piringer said the agency handled around 100 emergency calls while the storms rolled through the area, most dealing with downed power lines and flooding.

Piringer said there were multiple reports of downed lines resting on trees.

Anyone who encounters a downed power line should steer clear of the area, Fox said.

Before the storms, forecasters warned of dangerous heat Wednesday, with possible heat indexes up to about 109, according to Storm Team 4 meteorologist Lauryn Ricketts.

The weather service posted a heat advisory for the immediate D.C. suburbs, eastern Maryland and much of Northern Virginia, noting a risk of heat-related illness without proper hydration.

The extreme heat helped fuel the strength of the storm, according to Storm Team 4 meteorologist Amelia Draper. She said the area should brace for high winds and heavy rainfall.

“The biggest concerns are heavy rainfall leading to flooding and damaging winds over 60 mph,” Draper said. “I can’t rule out some smaller hail and an isolated weak tornado, but it isn’t very likely. Storms today are being fueled by the dangerous heat and humidity.”

For those looking to escape the heat, the District has a list of cooling centers available online.

Thursday is looking a little cooler, though not by much, with temperatures expected to stay in the low 90s. Heat indexes will still reach around 100 with a humid air mass in place.

Expect another round of thunderstorms Thursday afternoon through the evening, some of which could be strong to severe again.

By Friday, there will be more clouds and sunshine, with temperatures in the upper 80s to low 90s. The region could see more thunderstorms Friday, but with only a 30% chance.

The weekend looks dry, with falling humidity Sunday afternoon. Temperatures will stay in the 90s through the weekend.