Nationwide crackdown on impaired driving set to roll out

A new nationwide crackdown on impaired driving is beginning, and it’s not just aimed at drivers who have had too much to drink.
Listen now to WTOP News WTOP.com | Alexa | Google Home | WTOP App | 103.5 FM
(1/2) 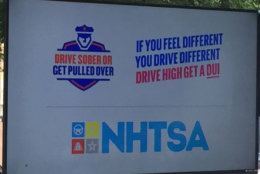 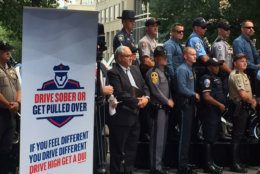 If you haven’t heard the warning “drive sober or get pulled over,” you’re probably living in a world with no TV, no radio and perhaps even no internet.

But a new nationwide crackdown on impaired driving is beginning, and it’s not just aimed at drivers who have had too much to drink. Both drunk and drugged driving will be targeted by state and local police agencies around the country.

“If you feel different, you drive different. Drive high, get a DUI,” said Joel Szabat, acting under secretary for policy with the U.S. Department of Transportation, during an event Wednesday.

Standing in front of a wall of traffic enforcement officers from D.C., Maryland and Virginia, he added: “Anytime you consume a substance that makes you feel different, you aren’t safe to drive. Impaired driving isn’t just a mistake. It’s a crime.”

Through the National Highway Traffic Safety Administration, this $13 million ad campaign will back a nationwide crackdown on impaired driving.

“Thousands of officers will be out on the roads doing extra patrols and checkpoints for both alcohol and drugs,” Szabat said.

“Research shows that more Americans are getting behind the wheel not only drunk, but also under the influence of drugs,” said Darrin Grondel, who chairs the Governor’s Highway Safety Association. “Poly drug use as we’re seeing in many of our toxicology screenings is a significant problem.”

“The numbers are dire,” he added, citing statistics that showed “a 16% increase in the number of alcohol-positive fatally injured drivers who have also tested positive for drugs in the past decade.”

In the coming weeks, you’re “going to notice an increase in enforcement, checkpoints,” vowed Domingo Herraiz, the director of programs at the International Association of Chiefs of Police.

“Law enforcement officers are particularly keen this time of year to those issues that people could be doing too much celebrating, not paying attention to the laws, breaking the laws while driving impaired.

“There’s no excuse today,” he said. “The reality is with all the ride sharing services, taxis, public transportation, there’s absolutely zero excuse. And there should be zero tolerance for anyone not to drive sober.”