The sting from sea lice can cause intense itching for local beachgoers. There are some tips for dealing with the occasional discomfort and inconvenience.
Listen now to WTOP News WTOP.com | Alexa | Google Home | WTOP App | 103.5 FM

Earlier this week, some swimmers in Virginia Beach felt the sting and itching sensation of being bitten by sea lice.

One Virginia Beach swimmer Thursday documented the sea lice he discovered in his bathing suit pocket:

😱😱😱! A man visiting the Oceanfront sent me this video of the sea lice he found in his bathing suit pocket yesterday. I’ll have an update on the water conditions today at 4:30. https://t.co/FVTGvvx6B5 pic.twitter.com/rC1TSq7LBz

Last summer, Ocean City had a brief but significant struggle with sea lice.

They’re in local beaches every year to some extent, with water temperatures and sea current direction playing a large role in determining whether the sea lice season is a boom or bust.

“If it does happen to you, where you start itching really bad within your suit, the best thing you can do is get to your hotel room, take that suit off, get it rinsed out,” said Tom Gill, of the Virginia Beach Lifesaving Service, to WTKR, in Norfolk, Virginia.

Gill said cooler waters by Friday seems to have alleviated the problem in Virginia Beach.

And, despite the “ewww” factor and temporary discomfort of a rash after being stung, there is, believe it or not, an upside to sea lice.

“Anyone who enjoys eating steamed blue crabs should welcome the sea lice,” said Chris Witherspoon, with the Virginia Aquarium.

“Around one out of every 500,000 blue crab eggs will become an adult crab — without sea lice appearing along shore and in the Bay each summer, there would be no blue crabs here.” 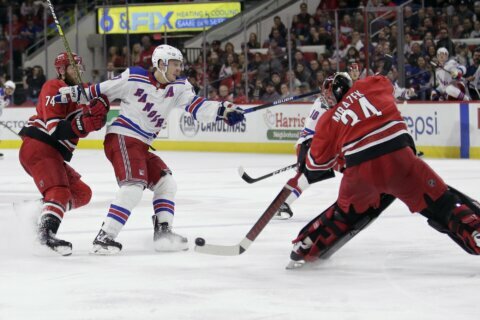