Local reporters killed in past year honored at Newseum memorial

The new additions to the Newseum's memorial wall include the four reporters who were killed inside the Capital Gazette newsroom as well as a Washington Post columnist who was critical of the Saudi crown prince.
Listen now to WTOP News WTOP.com | Alexa | Google Home | WTOP App | 103.5 FM
(1/3) 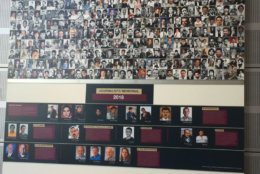 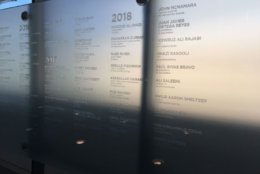 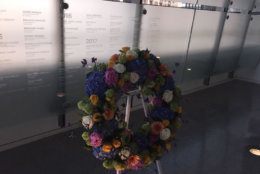 The names of 21 journalists from around the world who were killed last year while trying to deliver the news have had their names added to the memorial wall inside the Newseum.

Many of those names are familiar to people who live in the D.C. area.

The new additions include Gerald Fischman, Wendi Winters, John McNamara and Rob Hiaasen — the four reporters who were among the five people killed inside the Capital Gazette newsroom in Annapolis last year.

Friends, family and colleagues of those five were among the dozens who attended the ceremony at the Newseum.

“I’d like to thank the families of John, Wendi, Rob, Gerald and Rebecca [Smith, a sales assistant who was also killed in the attacks last year],” added Hutzell, “for the sacrifice they never could have imagined they’d be asked to make.”

Also honored at the ceremony was Washington Post columnist Jamal Khashoggi, whose critical writings led the Saudi crown prince to order his murder inside a Saudi consulate in Turkey last year.

“Today, [the Saudi government] continues to lie about Jamal,” said Fred Hiatt, the editorial page editor at the Post. “If he can be murdered with impunity, no journalist is safe.”

Hiatt extended that criticism to the U.S. response.

“If the people who directed the crime — including Saudi Crown Prince Mohammed bin Salman and his henchman, Saad al-Qahtani — if they can continue to find a welcome from the politicians and business leaders of this supposedly civilized world, then the fabric of that civilization itself is framed.”

“The job is more difficult when our own president does not share the goals or cherish the values that are at stake,” added Hiatt, “and when our own Congress — despite a good deal of bluster and apparent indignation — lacks the will, at least so far, to take a stand.”

Hiatt vowed to press for accountability.

“Jamal’s name is going on the wall, but the end of his story is not yet etched in stone,” declared Hiatt.

Other names on the wall include:

Those nine were killed by suicide bombers in Afghanistan.

The two were killed along with their driver Efrain Segarra by drug traffickers while reporting on drug violence in Columbia.

Kuciak exposed political corruption in Slovakia. He and his fiancé were both found shot to death in his apartment. Earlier this year, a powerful Slovakian businessman was charged with his murder, which ultimately led to the prime minister’s resignation.

These two reporters were killed in the Syrian civil war. An Al-Qaeda linked group is suspected in the attack

McCormick, a reporter and anchor at the station, and Smeltzer, his cameraman, were both killed when a tree 3 feet wide toppled onto their car as they were covering the arrival of Hurricane Alberto on the North Carolina coast. Fiancée of slain writer Khashoggi pleads for US response