The waters of the Potomac River, especially in the stretch where they form in the mountains and flow past Washington, are getting cleaner. But a new report says there’s still more work to do to get the river as clean as it was once upon a time.
Listen now to WTOP News WTOP.com | Alexa | Google Home | WTOP App | 103.5 FM

The waters of the Potomac River, especially in the stretch where they form in the mountains and flow past Washington, are getting cleaner. But a new report says there’s still more work to do to get the river as clean as it was once upon a time.

The Metropolitan Washington Council of Governments is out with a report Wednesday that says the water quality along the Potomac is vastly improved overall from where it was in the 1980s.

Pollution from nitrogen and phosphorous has been drastically cut in the years since then, and most of that reduction (75%) has been because of the strides waste water treatment plants have made in reducing the amount of harmful nutrients they release into the water.

As a result, research shows that the amount of underwater vegetation in the upper Potomac River is growing, as are populations of fish and other animals that make their homes along the water. And therefore, harmful, fish-killing algae blooms are down significantly in recent years along the upper stretch of the river.

But the authors of the report say that more needs to be done to limit the amount of sediment and nutrient runoff coming from urban and agricultural sources. While those levels have declined as well, it’s not nearly to the same degree that nutrients from wastewater sources have declined.

And the human population growth expected in the next few years will put more stress on those water treatment plants, making it hard to sustain the reductions that have been achieved.

Scientists, however, said it’s tough to lay out exactly how of a reduction in pollution those other sources of need to achieve, since so many other things impact water quality, including climate change and chemical contaminants.

But the bottom line is: The river is on its way, though more still needs to be done. 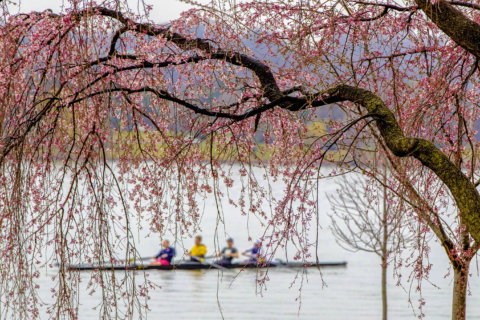