Decreased pollution and increased wildlife are two things helping to improve the river's health. Even still, it's not yet swimmable and fishable. Here's what needs to happen.
Listen now to WTOP News WTOP.com | Alexa | Google Home | WTOP App | 103.5 FM

WASHINGTON — The Potomac River just got its report card, and the news is quite good.

Ten years ago, the Potomac Conservancy rated the river’s health with a “D” grade. This year, it received a B — the river’s highest grade yet.

“Over the last couple of decades, the trends are all moving in the right direction,” said Hedrick Belin, president of the Potomac Conservancy, a nonprofit clean water advocacy organization.

Top river pollutants — including nitrogen, phosphorus and sediment — are all down, and fish and wildlife, including American shad and bald eagles, are returning to the region’s waters.

Another noticeable difference? People are returning to the river.

“One of the things we found in this report is that part of the Potomac’s recovery is tied to the community’s rediscovery of the river as a place to hangout, recreate and live,” Belin said.

New waterfront developments, including District Wharf, The Yards and the expanding Alexandria waterfront, are luring locals and visitors to shop, dine and paddle on the river.

Ten years ago, river activities such as paddling weren’t as popular. Due to high levels of pollution, the surface of the water was often covered in algae, especially in the summer.

“You also had a river that would smell a couple of decades ago,” Belin added.

Now, the focus is not only keeping the river attractive to kayakers and paddle boarders, but also making it a destination for fishers and swimmers. Belin said a few things need to happen before that’s possible.

“Right now, especially in and around the District, if it rains really hard, there are these pipes that discharge diluted sewage into the Potomac and into Rock Creek and into the Anacostia, and so you wouldn’t want to be swimming in that,” he said.

“But the great news is, DC Water just implemented the first phase of a project that’s going to eliminate those pipes in the Anacostia, in terms of them discharging diluted sewage.”

In fact, The Clean Rivers Project is the largest construction project in the District since Metro was built. The goal is to capture untreated sewage and divert it away from the rivers to the Blue Plains Advanced Watershed Treatment Plant.

After 13 miles of tunnels are built in the Anacostia River, the focus will turn toward the Potomac River and Rock Creek.

“And then that will eliminate a lot of the pollution that’s flowing in right now,” Belin added.

Another focus for the future is minimizing polluted runoff, which Belin explained is “pollution that washes across streets and sidewalks in urban and suburban areas” that then gets into the river. It’s primarily driven by sprawl and deforestation.

“That’s leading to degraded water quality, it damages fishing grounds, it exposes the public to bacteria and toxins, so that’s really the piece that we need to tackle,” he said.

Belin credits much of the success in cleaning up the river to the federal government’s efforts and involvement in the Chesapeake Bay Program. He said current threats to cut that funding could unravel the progress that’s been made.

“The trends are all moving in the right direction, but it’s going to take a while to get there still,” Belin said.

Project implementation on the state and local levels, in addition to individual citizen support — whether speaking up for policies or simply recreating on the river — are also needed to achieve the goal of an A. 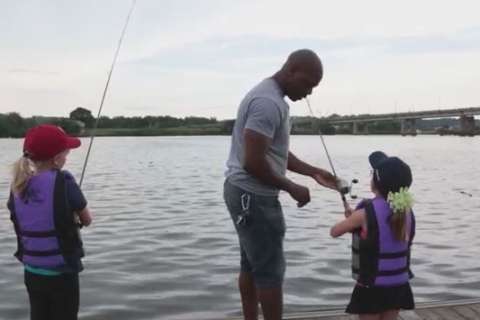