After severe storms rough up the DC area, a nice Friday is on the way

After a day of severe weather that triggered tornado warnings in Maryland and Virginia on Thursday, Friday starts the weekend with cooler temperatures and lower humidity in the D.C. area.
Listen now to WTOP News WTOP.com | Alexa | Google Home | WTOP App | 103.5 FM

After a day of severe weather that triggered tornado warnings in Maryland and Virginia on Thursday, Friday starts the weekend with cooler temperatures and lower humidity in the D.C. area.

On Thursday, heavy rains, strong winds, hail and even tornadoes pushed through portions of D.C., Maryland and Virginia, causing some damage and power outages, including downed trees and damage to a Frederick County, Maryland, ballpark.

The National Weather Service confirmed Thursday evening that a tornado had touched down at 3:22 p.m. about a mile southwest of Glenelg, in Howard County, Maryland. There were also early reports of possible touchdowns in Frederick County, Maryland, and in Spotsylvania County, Virginia.

In Fairfax County, Virginia, authorities reported that downed trees and debris had caused several road closures. Similar damage was reported in Frederick County as well as in Alexandria, Virginia.

Friday’s high will be in the 70s. The weekend, too, will feel somewhat less oppressive, compared with the July preview the area just experienced starting on Tuesday.

Friday: Partly sunny and a bit cooler with lower humidity. A chance for showers later in the day. Highs in the low to mid 80s.

Saturday: Mostly to partly sunny. Warmer and slightly humid. Highs in the mid to upper 80s. 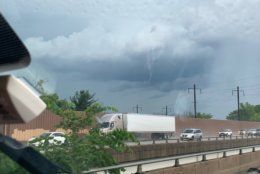 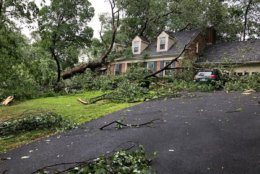