Some residents around Ranson, West Virginia, are concerned about emissions that the 24-hour-a-day factory will emit. Gov. Jim Justice had been silent about the issue since June 26, the day ground was broken for the factory.
Listen now to WTOP News WTOP.com | Alexa | Google Home | WTOP App | 103.5 FM

WASHINGTON — For the first time since a swirl of public awareness, concern, and fear about emissions from the Rockwool insulation factory being built in Jefferson County, West Virginia Gov. Jim Justice said he is “in complete support” of the Denmark-based company’s efforts.

Justice had been silent about the Rockwool controversy since a news release June 26, the day ground was broken for the 24-hour-a-day factory. It’s being built on the site of a former apple orchard off State Route 9 in Ranson, West Virginia.

Factory opponents have said local governments and agencies rushed to finalize the $150 million deal, in an effort to deny the public an opportunity to review and give input on the project.

“Rockwool has followed all the required procedures and the West Virginia Department of Environmental Protection will continue to review and make certain that the law is followed and that the health of our citizens and the environment remain as the top priority,” Justice said in a statement.

Despite several emailed requests for an interview to address questions about residents’ concerns regarding more than 2 million pounds of yearly emissions the factory will emit — according to its projections to the U.S. Environmental Protection Agency — Justice’s communication director, Butch Antolini, has declined.

“Rockwool has demonstrated for many years at other facilities they operate in Mississippi and Canada that they are a green company and that they take the steps needed to ensure that their manufacturing operations don’t endanger the health and welfare of the public or the environment,” Justice said in the statement.

Tuesday, a West Virginia circuit judge denied a motion by a watchdog group representing concerned residents, which had filed an injunction to immediately stop construction of the factory. The group, Jefferson County Vision, said the civil suit will move toward trial, with hopes of stopping construction.

When asked for a response to Justice’s support for Rockwool, a spokesperson for the residents’ group did not immediately respond. 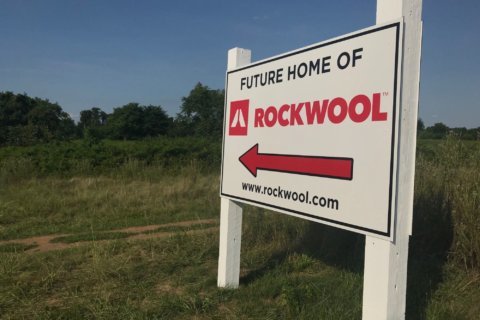