I-95 traffic, Amtrak service among the casualties of the severe winds 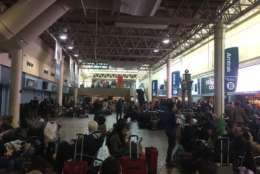 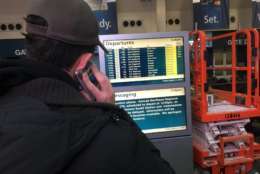 WASHINGTON — Getting out of town, or just getting across it, is proving to be a tall order amid Friday’s severe winds.

Amtrak canceled service Friday afternoon for the rest of the day along its Northeast Corridor, citing “multiple weather-related issues.” (Trains that were en route had been holding at Washington, New York or Boston.)

At about 5:20 p.m., Amtrak suspended southbound service out of Washington for the rest of the day as well.

Curt Tripp from Stafford, Virginia, was trying to get to New York City to spend the weekend with his children. When the trains were canceled, he figured he and his wife would make the best of being in the nation’s capital.

“I think I might go do a really good dinner in D.C.,” Tripp said.

Tom Browning, who was trying to get back home to Philadelphia, was feeling less upbeat. “It’s just unfortunate,” he said. “Mother nature won today.”

And Cliff Aron, who was headed home to Brooklyn, New York, saw the glass as half-full: “I mean, there are worse places than D.C. to spend a couple extra nights, right?” he said.

Within the D.C. area, Metro has been operating at reduced speeds above ground. Delays remain a possibility due to the proliferation of downed trees. Buses, of course, have had a few more disruptions, with several routes forced into detours.

Get Metro updates on train and bus service on Twitter.

Along Baltimore’s LightRail Link, service has been disrupted between the North Avenue and Lutherville stations. (Shuttle service is being provided.) All Baltimore Light rail will be suspended after 7 p.m.

The southbound lanes of I-95 are closed at the Prince William Parkway to allow a structural engineer to inspect the iconic 140-foot Potomac Mills sign, which has begun to lean from the wind. Some Express Lane tolls have been suspended in the area; Michael McGurk, of Transurban, which operates the lanes, said it was the first time the tolls had been suspended for anything other than snow and ice.

Throughout the area, there have been intermittent closures of, and delays at, major bridges caused by the winds:

Delays are also a possibility for anyone flying out of the D.C. area’s three major airports. At Dulles International Airport, high winds even forced a short-term tower evacuation and temporary ground stop Friday afternoon. In contrast, conditions were “normal” at BWI Marshall Airport as of noon Friday, but there were still some delays.

Officials strongly advise you to check with your airline on your flight’s status.