The lobbyist who was wounded in last week’s congressional baseball practice shooting has been discharged from the hospital, his family says.
Listen now to WTOP News WTOP.com | Alexa | Google Home | WTOP App | 103.5 FM

WASHINGTON — The lobbyist who was wounded in last week’s congressional baseball practice shooting has been discharged from the hospital, his family said Friday evening.

Matt Mika, an executive in Tyson Foods’ D.C. office, was being treated for multiple gunshot wounds after the June 14 shooting at the Alexandria baseball field. He was upgraded to good condition earlier Friday and his family says he was discharged from George Washington University Hospital later in the day. 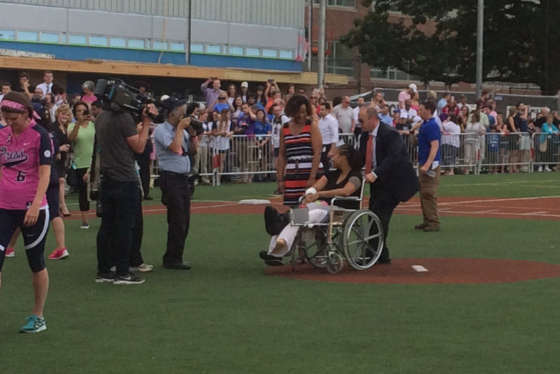 A week after she was wounded in a ferocious firefight on an Alexandria ballfield, U.S. Capitol Police Officer Crystal Griner was honored at the Congressional Women’s Softball Game.

“We are truly grateful for the compassionate, world-class care provided by the doctors, nurses and team at George Washington, and we will never forget and continue to be grateful for the heroism shown by the U.S. Capitol Police,” Mika’s family said in a statement. “We truly appreciate the prayers, words of encouragement and support from Matt’s friends, family and people across the nation and the world.”

Mika got a special bedside visit from Nationals star Jayson Werth, the hospital tweeted Friday.  It released a photo of a smiling Mika, a former congressional staffer, holding up jersey No. 28 next to the outfielder.

House GOP Whip Steve Scalise, who was shot in the hip and critically wounded, has been transferred out of the intensive care unit after “continued good progress,” MedStar Washington Hospital Center announced Friday. Scalise remains in fair condition “as he continues an extended period of healing and rehabilitation,” the hospital said in a statement.

James Hodgkinson, 66, opened fire June 14 at an Alexandria ball field where Republican members of Congress were gathered to practice for an upcoming charity game, critically injuring Mika and Scalise, the No. 3 Republican in the House.

Another congressional staffer was shot in the leg and released from the hospital last week. Two Capitol Police officers were also injured during an exchange of gunfire with Hodgkinson, who was fatally shot by police.

Mika had participated in the Congressional Baseball Game for years.

Scalise, who was shot in the hip, was at “imminent risk of death” when he arrived at D.C.’s MedStar Washington Hospital Center but had improved to “fair condition” by earlier this week after a series of operations.

The FBI this week released preliminary details of its investigation into the shooting, revealing Hodgkinson fired 60 rounds from a 7.62 mm caliber SKS rifle and a 9 mm handgun and had a list with the names of six members of Congress on him when he carried out the early morning attack.

Hodgkinson had ranted on social media about Republicans and Republican policies, but hadn’t made any threats. The shooting appeared to be “more spontaneous” than planned, an FBI official said.