A week after she was wounded in a ferocious firefight on an Alexandria ballfield, U.S. Capitol Police Officer Crystal Griner was honored at the Congressional Women's Softball Game.
Listen now to WTOP News WTOP.com | Alexa | Google Home | WTOP App | 103.5 FM
(1/5) 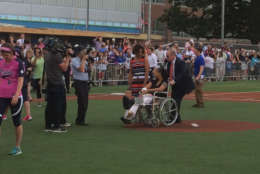 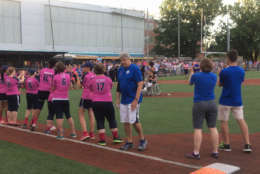 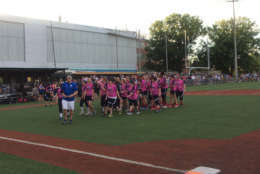 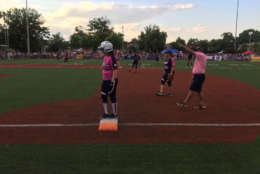 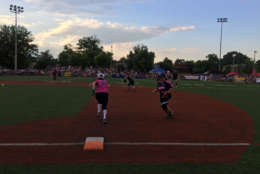 WASHINGTON — One week after she was wounded in a ferocious firefight defending Republican members of Congress on an Alexandria ballfield, U.S. Capitol Police Officer Crystal Griner was back on the diamond Wednesday night.

Still recovering from a gunshot wound to the ankle, Griner smiled broadly from her wheelchair as players and fans cheered her appearance.

The congressional women’s team, dressed in blue, and their opponents — women members of the D.C. press corps, dressed in pink — surrounded the officer on the pitcher’s mound and helped accompany her off the field.

Griner was introduced as “a true American hero.”

She — along with Special Agent David Bailey (who was injured) and several other officers — exchanged shots with the gunman, who had critically wounded House Majority Whip Steve Scalise.

Scalise’s condition was upgraded to fair on Wednesday, and hospital officials said he “continues to make good progress.” Barth was treated and released from the hospital last week; Mika is expected to make a full recovery.

The officers quick actions in neutralizing the threat are believed to have saved lives.

As for the softball game itself, the press corps won 2-1.

The game raised money for the Young Survival Coalition. To date, it has brought in more than $1.1 million since its founding.