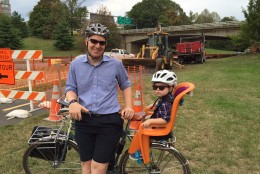 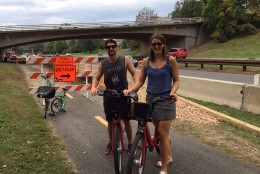 WASHINGTON —  The Mt. Vernon Trail is one of the city’s most popular routes for running, walking and cycling, but some people think its improvements could force cyclists onto narrow sections covered with mulch.

They’re “a terrible accident waiting to happen,” a listener told WTOP in an email.

Others tweeted their frustrations. For some cyclists, the Mt. Vernon Trail is a commuter route and the detours aren’t safe.

The trail is being realigned under the Route 233 bridge near the Ronald Reagan Washington National Airport. It’s part of a larger federal highway project to improve airport and parkway access ramps, said Aaron LaRocca, a spokesman with the National Park Service.

On Friday, bike riders seemed indifferent about the trail changes. One cyclist, who didn’t want to be taped for broadcast, said the realignment is no big deal. The mulch pathways are temporary and the trail will be improved when it’s done.

Andrew Maclellan and Jessica Moulds — both from New Zealand — were riding Capital Bikeshare bikes along the trail, and weren’t put off by the narrowed mulch pathways in the work zones.

“If this is the only problem you have — a little bit of mulch — I think you’re doing pretty well to be honest,” Maclellan said.

Moulds said they were blown away by the bike infrastructure in the D.C. region, including the Mt. Vernon Trail.

“New Zealand doesn’t even have bike lanes like this,” Moulds said. “So a bit of mulch is nothing for us. You’re pretty lucky.”

Here are the work zones:

The realignment under the bridge will put a little more distance between trail users and the George Washington Parkway. This work will continue for two to three weeks, LaRocca said.

The realignment under the Metro Bridge will create more space between the trail and the George Washington Parkway, LaRocca said. The work on this segment is scheduled to last about three months.

“This realignment will move the trail farther from the road to create a safer separation with a barrier wall, between the trail and the roadway,” LaRocca wrote in an email.

“The barrier wall will be a stone wall and metal rail, similar to the barrier wall along the trail at Boundary Channel Bridge (Humpback Bridge near the interchange of the parkway and 395). The duration of this portion of the project is extended because the planned realignment parallels utility lines and crews must proceed with caution.”

A third segment is just south of the Metro bridge and will straighten out a tight turn near a tree, something regular commuter John Stowe said is welcome.

LaRocca said officials decided on the mulch surface after the use of gravel on other projects led to injuries. Asked why the temporary segments weren’t paved to make a smoother route, La Rocca said paving is used on permanent segments.

The Mt. Vernon Trail is a primary travel route for him. On Friday, he was on a bike with his 2-and-a-half year old son Arthur, who was strapped into a child seat on the back of his father’s bicycle.

“It makes it tough, especially when you’ve got a heavy load like this,” he said, pointing to his son. “I might try to power through it on my own,” Stowe said, but with his son on board, he wouldn’t risk a spill on the mulch.