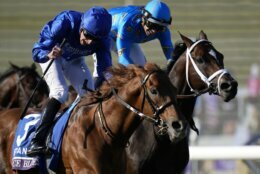 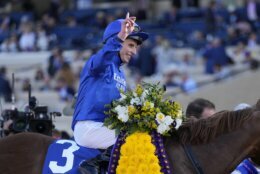 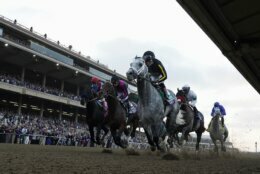 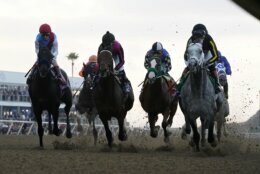 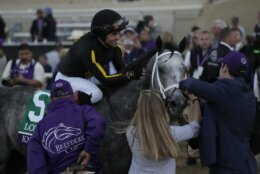 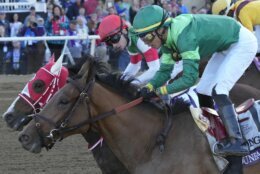 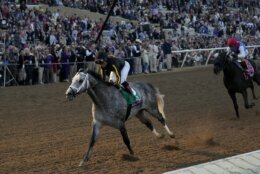 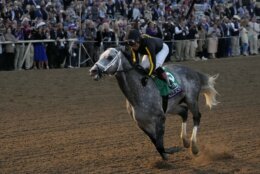 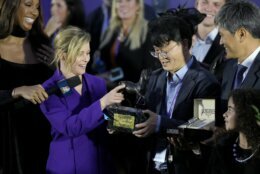 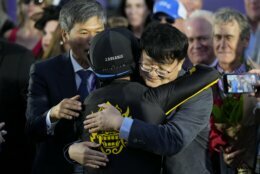 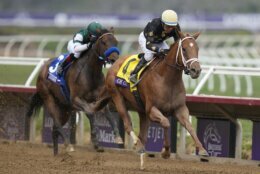 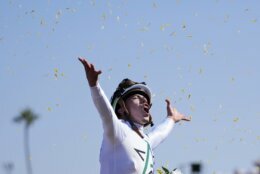 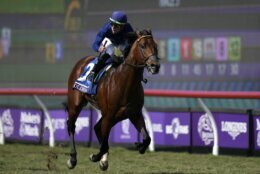 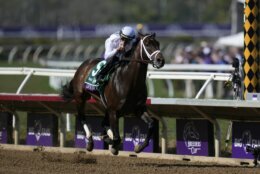 DEL MAR, Calif. (AP) — The opposition knew Knicks Go would charge out of the starting gate. Yet, none of his rivals went after him.

He had it all his own way in setting an uncontested lead and winning the $6 million Breeders’ Cup Classic by 2 3/4 lengths on Saturday at Del Mar.

Knicks Go ran 1 1/4 miles in 1:59.57. He earned his fourth straight victory and in the process solidified a bid to win the Eclipse Award as Horse of the Year.

“Speed is very dangerous,” winning trainer Brad Cox said. “I kind of felt like if they did try to go with him they may jeopardize their own opportunity to win the race.”

“He broke really sharp,” said Rosario, who won his 15th Cup race. “He looked like he was really enjoying what he was doing. I could see his ears, he was so relaxed.”

Sent off at 3-1 odds by the crowd of 26,553, Knicks Go paid $8.40 to win. He won the Dirt Mile at last year’s event and became the sixth horse to win two different Cup races. He has South Korean ownership.

“This one was very, very high on our list of races we wanted to win and we capped it off,” said Cox, who won his first Classic.

Cox also saddled 9-5 favorite Essential Quality, who finished another length back in third.

Medina Spirit couldn’t muster the necessary late kick to threaten Knicks Go and was second for embattled trainer Bob Baffert. The colt failed a post-race drug test after the Derby and the Kentucky Horse Racing Commission has yet to make a final ruling based on its investigation.

“I’m very proud of him. He ran a great race,” Baffert said. “To me, he’s the best 3-year-old. He showed it today. That’s what racing is all about, proving it on the racetrack. And he proved it today that he’s the real deal.”

Baffert was allowed to enter horses in the season-ending world championships, but the event’s money-leading trainer had to meet certain conditions, including stricter out-of-competition testing of his horses and greater security at his barn. He agreed to the extra scrutiny and was required to pay for it out of his own pocket. He won the $2 million Juvenile with Corniche on Friday.

Hot Rod Charlie, second to Essential Quality in the Belmont, was fourth. Fans chanted “Let’s go Chuck!” before the race.

The Classic results provided balm for Cox, who didn’t win with any of his other horses during the weekend.

Stilleto Boy was fifth, followed by Art Collector, Tripoli and Max Player. The field was reduced to eight when Express Train was scratched.

Yoshito Yahagi trained both of Japan’s champions. Loves Only You won the Filly & Mare Turf by a half-length under Yuga Kawada. She paid $10.60 to win.

“I’d like to say thank you to my horse. She did a great job,” Yahagi said through a translator. “It’s a dream come true for the Japanese horse racing industry.”

— Britain-bred Yibir won the $4 million Turf by a half-length, giving trainer Charlie Appleby, jockey William Buick and owner Godolphin Stables their third win of the weekend. Godolphin is the racing outfit for Sheikh Mohammed bin Rashid Al Maktoum, the ruler of Dubai. Yibir ran 1 1/2 miles in 2:25.90 and paid $19 to win. The 3-year-old gelding had one horse beat turning for home before charging on the outside and reeling in Broome, who finished second.

The trio earlier teamed to win the $2 million Mile with 2-1 favorite Space Blues and the $1 million Juvenile Turf on Friday with Modern Games.

— In the Mile, Ireland-bred Space Blues won by a half-length. He paid $6.20 to win as the 2-1 favorite. Appleby’s other horse, Master of the Seas, was scratched at the starting gate after acting up in the No. 1 post. Neither horse nor jockey James Doyle was hurt. It was similar to what occurred Friday, when Modern Games was mistakenly scratched by the veterinarians before being reinstated to run in the Juvenile Turf for purse money only. Modern Games won.

— Aloha West scored a nose upset in the $2 million Sprint. The 4-year-old colt, who began his racing career this year, was sixth at the top of the stretch and edged Dr. Schivel at the wire under Jose Ortiz. Trained by Wayne Catalano, Aloha West ran six furlongs in 1:08.49 and paid $24.60 to win.

— Life Is Good cruised to a 5 3/4-length victory in the $1 million Dirt Mile, giving jockey Irad Ortiz Jr. his third Cup victory of the weekend. The 3-year-old colt paid $3.40 to win as the 3-5 favorite. Trainer Todd Pletcher earned his 12th Cup win.

— Golden Pal rocketed to the front in the $1 million Turf Sprint and won by 1 1/4 lengths under Irad Ortiz Jr. Ortiz and trainer Wesley Ward combined to take the Juvenile Turf on Friday with Twilight Gleaming.

— Jockey E.T. Baird was fined $5,000 by the Del Mar stewards for violating California’s whip rules in the Juvenile Turf Sprint on Friday. He was cited for using the whip more than six times during a race. His mount, One Timer, finished ninth.