VIRGINIA — Virginia GOP Chairman John Whitbeck announced his resignation just weeks after Corey Stewart won the Republican nomination to go up against Sen. Tim Kaine in the November election for Senate, and some are speculating that the two pieces of news are related.

Geoffrey Skelley, associate editor of Sabato’s Crystal Ball at the University of Virginia Center for Politics, said Whitbeck’s decision comes as his party goes through an internal conflict between an insurgent, more conservative wing and establishment-type Republicans.

“I would suspect that that conflict might arise here as well, in terms of who is the next leader of the party in the state,” said Skelley.

Skelley said the unpaid position of chairman is typically a launchpad for other political aspirations, and as the face of Virginia’s Republican party, Whitbeck would have had to answer questions about a controversial candidate like Stewart — something he may not have wanted to do in the wake of other political goals.

“It’s been speculated that Whitbeck didn’t want to spend the next few months talking about Stewart,” Skelley said. “I can see that being an understandable motivation for Whitbeck if he wants to run for something in the future and doesn’t want to have a bunch of quotes about Corey Stewart on his track record.”

“He is been through several very competitive elections. It wears on you and I take him at his word that he has to refocus on his legal practice,” said Stewart.

Overall, Skelley said the next GOP chairman in Virginia should be one willing to take on all that comes with the party. 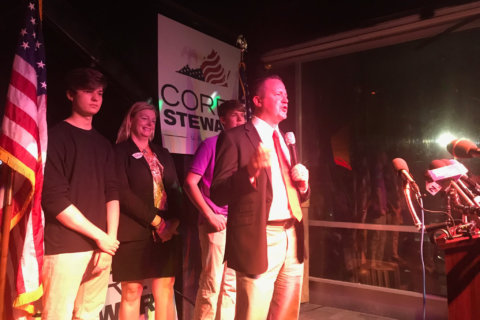