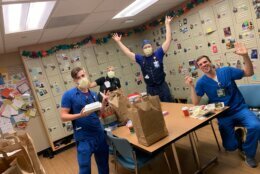 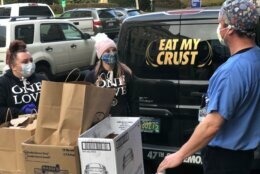 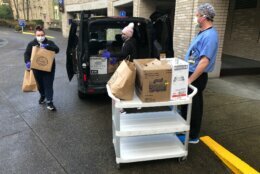 PORTLAND, Ore. (AP) — It was the week after Christmas and coronavirus case numbers and hospitalizations were soaring in Portland, Oregon.

At Oregon Health & Science University, the state’s largest hospital, morale was low. Doctors and nurses caring for the most critically ill were burning out just when they were needed the most.

Then, the food started coming: hot and delicious individually wrapped meals from some of the city’s trendiest restaurants, a buffet of cuisines from Chinese to Italian to Lebanese to Southern comfort food. For staffers who only took off their N95 masks once to eat during a 12-hour shift, the meals were more than just food — they were emotional sustenance.

“It’s almost like having a weight lifted. It’s like getting a surprise dozen roses or something,” nurse Alice Clark said. “We’re so grateful.”

But the meals, paid for by a wellness grant from the Oregon-based insurance fund SAIF, also served another purpose: They kept struggling restaurants afloat. As fall and then winter set in, eateries were folding under the strain of a monthslong indoor dining ban. The hospital orders — sometimes 150 or 160 meals at a time — were a financial lifeline.

“It’s kept the doors open and a small workforce employed. It’s been the most heartfelt catering we’ve ever done,” said Kiauna Floyd, third-generation owner of Amalfi’s, a Portland institution that’s been serving up Italian cuisine for 62 years.

Floyd’s staff has prepared around 500 meals for OHSU, allowing her to keep a core crew employed after laying off three-quarters of her employees. The restaurant is currently limping along with seven tables on an outdoor patio in the height of winter, as well as takeout orders and pre-packaged meals-to-go.

Amalfi’s focused on manicotti and lasagna dishes for the COVID support meals — and the restaurant’s deliveries have proved to be among the most popular with the recipients.

“We want to do something as comforting as possible so when they are on their break and do get that lunch, it warms their soul,” she said.

For now, though, meal deliveries to OHSU have dried up with the grant funding, and the program ended on Jan. 19. Leaders are hoping for a new funding source to get meals running again soon. The three-week effort paid local eateries a total of $39,000 at a critical time.

A similar effort funded by private donations through a now-defunct nonprofit called Frontline Foods PDX connected restaurants with Portland-area hospitals and clinics early in the pandemic, but then donations began to fall off and the effort slowed and then stopped.

That effort provided about 13,800 meals over three months to six facilities, including a veteran’s hospital and a homeless clinic, and was a major source of pandemic revenue for 14 restaurants — many of them owned by people of color.

“To be able to call and say, ‘Hey, I have $2,000 of business for you’ is just the most incredible feeling,” said Shannon Tivona, who coordinated meal orders and delivery for OHSU and volunteered for Frontline Foods in its earlier work.

But many of the same restaurants were called upon to deliver 2,600 meals to OHSU doctors, nurses, physician assistants, custodial staff and other front-line workers in the emergency room and on two COVID-focused floors — three times a week, for both day and night shifts.

For nurse Henry Valdez, the meals were an essential break — and confirmation that the community had his back.

“I’ve never been more tired, mentally, physically and emotionally. It really has drained me,” he said. “When these meals started, I was just in awe. One or two times it brought a tear to my eye, the generosity of people, because it has not been an easy year — and the food provided comfort.”