The road closures for next week's inaugural events are expected to have a major impact on travel throughout the District.
Listen now to WTOP News WTOP.com | Alexa | Google Home | WTOP App | 103.5 FM

WASHINGTON — The road closures for the inaugural events are expected to have a major impact on travel throughout the District.

Unlike the lead-up to President Barack Obama’s inaugurations, drivers will not have a weekend to acclimate to the closures for President-elect Donald Trump. Instead, roadblocks will go into place on downtown streets in the middle of a busy workweek.

See the full list of road closures and parking restrictions.

Travel will become increasingly difficult on Thursday as road closures are put into place throughout the day. Long delays are possible on routes near and along the Potomac River with many routes around the Lincoln Memorial off-limits. The master transportation plan compiled by the Presidential Inaugural Subcommittees lists more than 200 road, ramp and bridge closures scheduled to take effect on between Wednesday and Friday. The timing for parking restrictions and road closures is summarized below:

On Wednesday, Jan. 18, authorities will begin posting emergency no parking signs on streets downtown near the White House, Federal Triangle and Capitol. Unauthorized vehicles without a placard will be ticketed and towed beginning on Thursday morning. Except for Washington Avenue near the Rayburn Building, there are no major road closures scheduled on Wednesday.

Towed vehicles will be taken to to either Capitol Hill Montessori at Logan (215 G Street NE) or McKinley Technology High School (151 T Street NE). Dial 311 for more information. However, enforcement of expired meters and residential parking restrictions will be suspended on Friday and resume Saturday.

Beginning at 3 a.m. on Thursday, road closures will be rolled out in stages beginning along Pennsylvania Avenue west of the Capitol. Police plan to keep the north/south routes across Pennsylvania Avenue open for as long as possible. Travel downtown will become increasingly difficult throughout the day. As the day wears on, police will continue to block streets through Federal Triangle, Judiciary Square and across the National Mall.

After 4 a.m. Thursday, a separate round of closures will be implemented near the Lincoln Memorial for a welcome celebration and concert. Two busy commuting routes, Constitution Avenue and Independence Avenue, will be closed between the Lincoln Memorial and Washington Monument by mid-morning. Independence Avenue and a portion of the Rock Creek Parkway between the Tidal Basin and the Kennedy Center will be closed after 5 a.m. Inbound traffic on Interstate 66 from Virginia will be diverted onto the Potomac Freeway toward the Whitehurst Freeway by 10 a.m. when Constitution Avenue closes.

Also on Thursday morning, driving and parking restrictions will be put into effect for locations as far away as K Street and Washington Circle, as many as five blocks removed from the web of closures downtown. Only residents or local business traffic will be permitted to flow into this restricted zone. National Guard personnel will assist with verifying traffic entering these areas.

By 2 p.m. on Thursday, Massachusetts Avenue and Columbus Circle are scheduled to be closed in front of Union Station for an inaugural event. H Street NE and First Street NE near the bus depot and parking garages are scheduled to remain open but periodic stoppages of traffic are expected until 11 p.m.

Police will continue building out the closures along the parade route and along the Mall through the evening and overnight hours. Travel will become increasingly difficult on Thursday as more blockades are established near the Capitol and across the Mall.

By early Friday morning, nearly all of the closures will be in effect. The 3rd Street Tunnel is scheduled to close at 6 a.m. on Friday. This is the only event that closes all four expressways in the District, including the 3rd Street and E Street tunnels. Traffic will likely be very congested on the Southeast/Southwest Freeway throughout the day.

For the inaugural balls, closures will be in place around the Washington Convention Center from 10 a.m. to 11 p.m. Massachusetts Avenue and New York Avenue will both be off-limits near Mount Vernon Square.

After crowds disperse following the parade, the closures of the expressways and some downtown arteries are expected to be lifted. This should happen around 6 p.m. The travel restrictions are scheduled to be lifted by 1 a.m. on Saturday morning. Some road closures near the White House, Federal Triangle and the Capitol will remain in effect through the rest of the weekend.

Interstate 395 across the 14th Street Bridge and Southwest Freeway will remain open throughout the week, but traffic will likely be heavy, with the exits to 14th Street SW and the 12th Street Expressway blocked by Thursday night.

The Key and Chain bridges will remain open, but traffic will likely be heavier than usual on Wednesday and Thursday.

Rock Creek Parkway will open north of Virginia Avenue. Drivers will be able to use the parkway to access the Roosevelt Bridge. Two-way traffic is scheduled to run on the parkway all day long on Thursday and Friday.

In Virginia, high-occupancy vehicle (HOV) restrictions will be lifted on Interstate 66 on Friday. Tolls will remain in effect on the 95 Express Lanes.

On Friday morning, northbound drivers in the 95 Express Lanes will not be able to continue onto the Interstate 395 HOV Lanes; the HOV lanes will be closed most of the day.

The 95 Express Lanes are expected to open to southbound traffic by about noon. Drivers will be able to access the express lanes south of the Beltway.

The I-395 HOV Lanes will open to southbound traffic when the inaugural parade concludes.

Washington National Cathedral will hold its traditional inaugural prayer service on Saturday morning. Wisconsin Avenue will be blocked in front of the National Cathedral and Massachusetts Avenue is scheduled closed between Wisconsin Avenue and Garfield Street through noontime. Garfield Street, 34th Street and Woodley Road are expected to remain open.

Downtown drivers will likely be confronted with broader travel challenges as the Women’s March on Washington takes place.

Organizers have said they expect up to 200,000 people to congregate near the U.S. Capitol around 10 a.m. D.C. Police say that 3rd Street will be closed as the march heads west along the National Mall. Independence Avenue will be blocked between Capitol Hill and 6th Street SW. 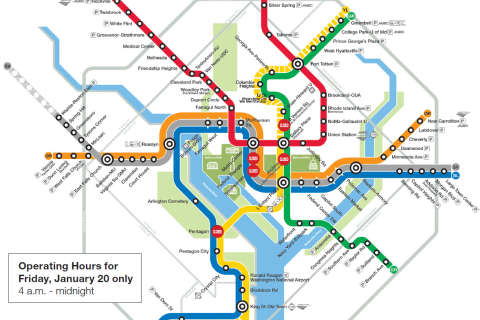 Public transit and other ways to get to inauguration events