With water rescues, flooding and downed trees reported throughout the area, Ellicott City residents, who suffered devastating floods in 2016 and again in 2018, kept a close eye on local weather reports and their social media accounts for any indication that the flood-prone city would see a repeat of those destructive floods.

Sanger woke up to the sound of Monday morning’s downpour. “I lay there for a long time listening to it,” she said.

When the rain didn’t appear to let up, she contacted other business owners in the Old Ellicott City community on social media with the greeting “OK, campers, it’s time to check in!” asking if everyone was OK and what their plans were.

Sanger said when she saw that the National Weather Service had issued a flash flood warning that mentioned Ellicott City, “Things started to get a little dicey for us.”

She explained why that gave her pause: “We’ve been told that when the National Weather Service issues a flash flood warning that those sirens go off.” Sanger was referring to the sirens that were set up as part of Howard County’s emergency warning system. Signs alerting visitors to what the sirens mean are posted up and down Main Street. 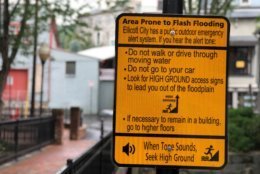 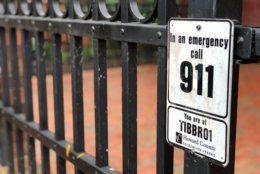 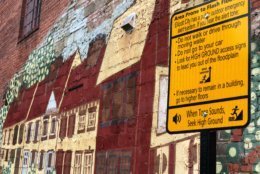 So, when the sirens remained silent, Sanger said there was confusion.

When asked about the flash flood notification system and how it works, Howard County Office of Emergency Management referred reporters to their Facebook page, which, at 12:38 p.m. posted an explanation saying that while the initial flash flood warnings from the weather service mentioned “the western edge of Ellicott City” as being under a flash flood warning, historic Ellicott City was not covered by that warning — and that’s why the emergency alert tones were not triggered.

The post on the “Ellicott City Safe and Sound” Facebook page goes on to say that “Howard County is now working with the National Weather Service to address how to separate historic Ellicott City as its own geographic district,” so that when future flash flood warnings go out, any confusion would be eliminated.

Another area business owner, who lives in Ellicott City, found the county’s response frustrating. In a response to the “Ellicott City Safe and Sound” post, Christina Allen Page wrote, “Clarifying for us should have been a priority from the start, not an afterthought after people started calling it out on social media.”

Agnie Tersiguel, manager of Tersiguel’s French Country Restaurant on historic Ellicott City’s Main Street, commented on the same Facebook page: “The laissez-faire attitude regarding this information is disappointing at best. Our officials, from NWS to local government, to police dept., to emergency operations need to do much better, not only by the people of this community, but the hundreds and thousands in our surrounding communities standing on pins and needles with us. There is no more time to try and get things right.”

Though there are lingering concerns about the possibility of future flooding, businesses also struggled to get past the image of a city that’s been shuttered by severe weather events.

Inside Antique Depot, at the base of Main Street, dealer Lisa Emmerling wanted to remind people that while businesses work to recover from last year’s flooding, Ellicott City remains a vibrant place to visit.

“Many, many stores are open; new stores have come in, there are great restaurants. … It’s still a wonderful place,” Emmerling said.

She added, “honestly, I somewhat blame the media for going for the sad stories instead of the happy ones.”

And while other business owners, such as Sanger, said the recovery has been a bit slow, Emmerling said the signs at Antique Depot are encouraging.

Her message to Ellicott City visitors: “It’s a lovely place to come and spend a day.”