For kids with migraines, a picture can be worth a thousand words 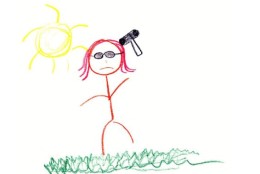 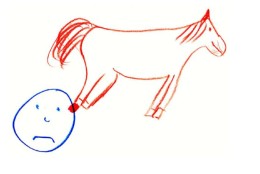 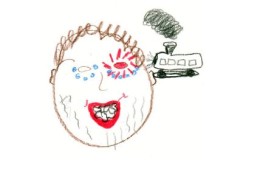 WASHINGTON — In this day of high tech medicine, an innovative doctor has found a simple way to effectively diagnose migraine headaches in children.

Diagnosing kids has always been tricky because they lack the verbal skills to fully describe their condition. But Dr. Carl Stafstrom, a pediatric neurologist with Johns Hopkins, says this is one case where a picture really is worth a thousand words.

He has been asking his young patients to draw their symptoms and has found over the years that their artwork provides important clinical insight.

“Please draw a picture of yourself having a headache — what does it feel like to you?” he asks a child sitting at a low table with paper and crayons.  There is no real additional prompting, as the youngster illustrates his or her own symptoms.

A study involving 226 children validated the process. A group of neurologists was shown their drawings and asked to determine whether each child had migraines. Eighty-seven percent of the time, their decisions — based solely on the drawings — matched the clinical diagnosis.

“That’s as high as many tests in medicine that require blood work or scans or things like that — and this was a simple art project,” says Stafstrom.

He says the things these children draw fall into several categories. Many of the drawings involve objects, such as hammers, baseball bats and drum sets — things that cause pounding and throbbing pain.

Some depict symptoms directly related to migraines in kids, such as vertigo, and nausea. Stafstrom says others illustrate sensitivity to sound and light, including “a picture of the sun with a line through it.”

The pictures range from a 4-year-old’s stick figures to a drawing by an adolescent worthy of placement in a comic book. All, however, provide vital information.

“If I showed you a picture of a child holding his head, heading to a toilet to throw up — that is worth many, many sentences worth of verbal description.  That just says it all,” says Stafstrom.

Parents and children have embraced this new approach to diagnosing migraines, and this pediatric neurologist now has 1,500 “works of art” in his collection.

“It really empowers the children to express themselves,” he says, adding that they appreciate the opportunity to have their own voices in the doctor’s office, instead of leaving all the talking to their parents.

Already there is talk about using art to help diagnose other neurological conditions in kids, such as epilepsy. And drawings by both parent and child could give doctors insight into genetic links in the years to come.

Stafstrom indicates the need for innovation to help kids with various neurological problems is great. He notes 5 percent of children below the age of puberty get migraine headaches. That goes up to 10 percent in the early teen years.