UPDATED at 10:37 a.m. 9/25/2020: The Arsenal of Democracy Flyover scheduled for Friday morning over the National Mall has been postponed.

“Well, we tried, but we never got the weather visibility we needed for the #ww2flyover so today’s flight is off. The weather was supposed to clear in time but it never cooperated with us so we will try again tomorrow at 11:30am EDT. Stay tuned for announcements in the morning,” a message on the group’s Facebook said.

Late Friday morning, dozens of World War II-era military planes will provide an airborne history lesson over the nation’s capital with the Arsenal of Democracy Flyover.

At approximately 11:30 a.m., more than 60 planes — ranging in size from tiny one-seaters to B-29 bombers — will fly down the Potomac River in formation,  and 1,000 feet above the National Mall.

“They’re going to fly from the Lincoln Memorial, down Independence Avenue, to just past the Washington Monument, and then they’re going to turn south,” said Mike Ginter, Airboss of the Arsenal of Democracy Flyover, and Executive Committee Member.

The flyover was originally scheduled to coincide with the 75th anniversary of Victory in Europe Day, on May 8, but was postponed due to the COVID-19 pandemic. Many of the planes flew in World War II.

Because of the coronavirus situation, no public events will be held at the World War II Memorial.

Organizers are encouraging people who’d like to watch the flyover to find a vantage point along the Potomac River, rather than gathering on the National Mall. Social distancing is suggested, and local mask guidelines will apply.

The event will be livestreamed, beginning at 10 a.m. 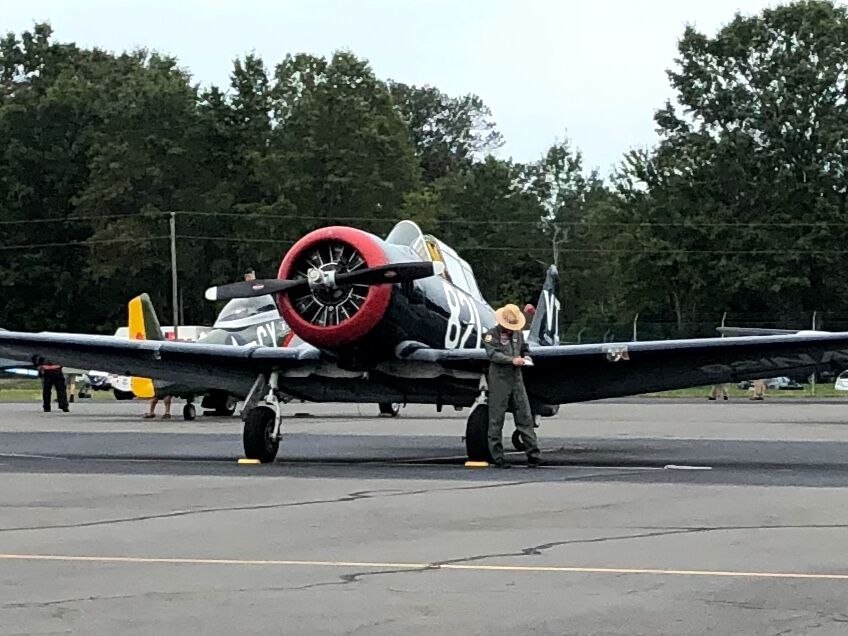 1/4
The flyover is an aerial tribute to “The Greatest Generation.” (WTOP/Neal Augenstein)

Ginter is responsible for leading the coordination of dozens of military aircraft. Before Thursday’s dress rehearsal, pilots studied printed schedules, which specified their movements to the second.

“Formation flying is a military necessity, when you’re flying an air combat patrol, it’s good to have a wingman, to watch your 6 o’clock, so a bandit doesn’t jump him,” Ginter said. “That’s really the idea of a formation — it’s mutual support.” 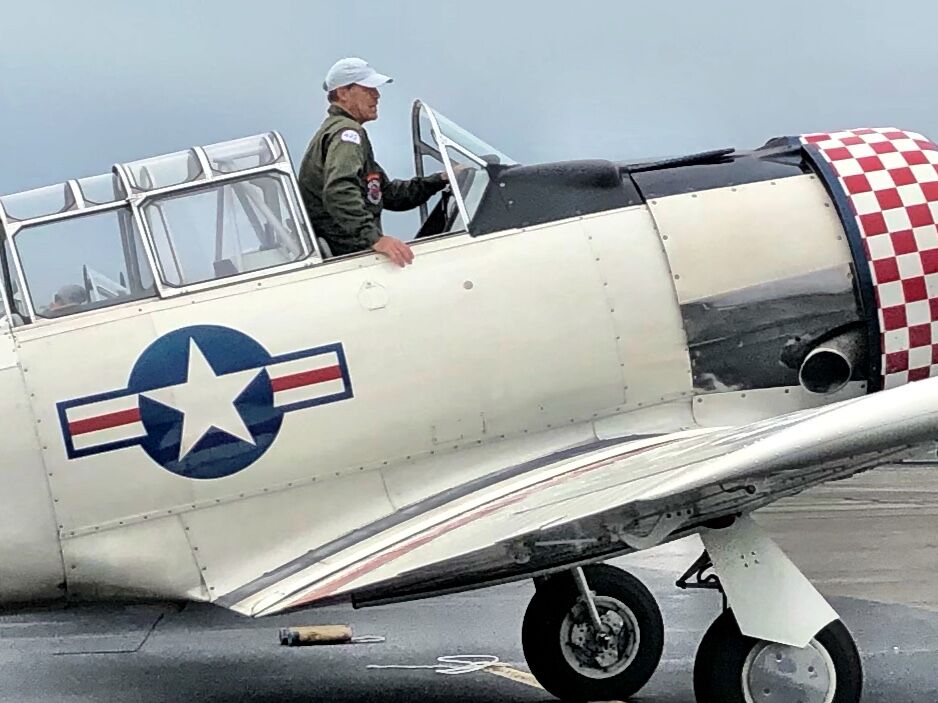 2/4
Flying over the nation’s capital is a rare honor. (WTOP/Neal Augenstein)

The airspace over the nation’s capital is highly restricted — while commercial pilots takeoff and land at Ronald Reagan National Airport, general aviation pilots know to not fly anywhere near downtown.

“It’s awe-inspiring when you fly down the Potomac River and approach Georgetown. You see the high-rises of Rosslyn to the right, and it’s impossible to miss the beautiful National Mall, you see the Lincoln Memorial.”

The flight route is both easy to follow and symbolic, Ginter said.

“The Lincoln Memorial is our turn point, we turn onto Independence Avenue at the Lincoln Memorial, wings level, right past the Washington Monument, and it’s a beautiful sight. And it’s one we don’t get to see, as pilots,” he said. 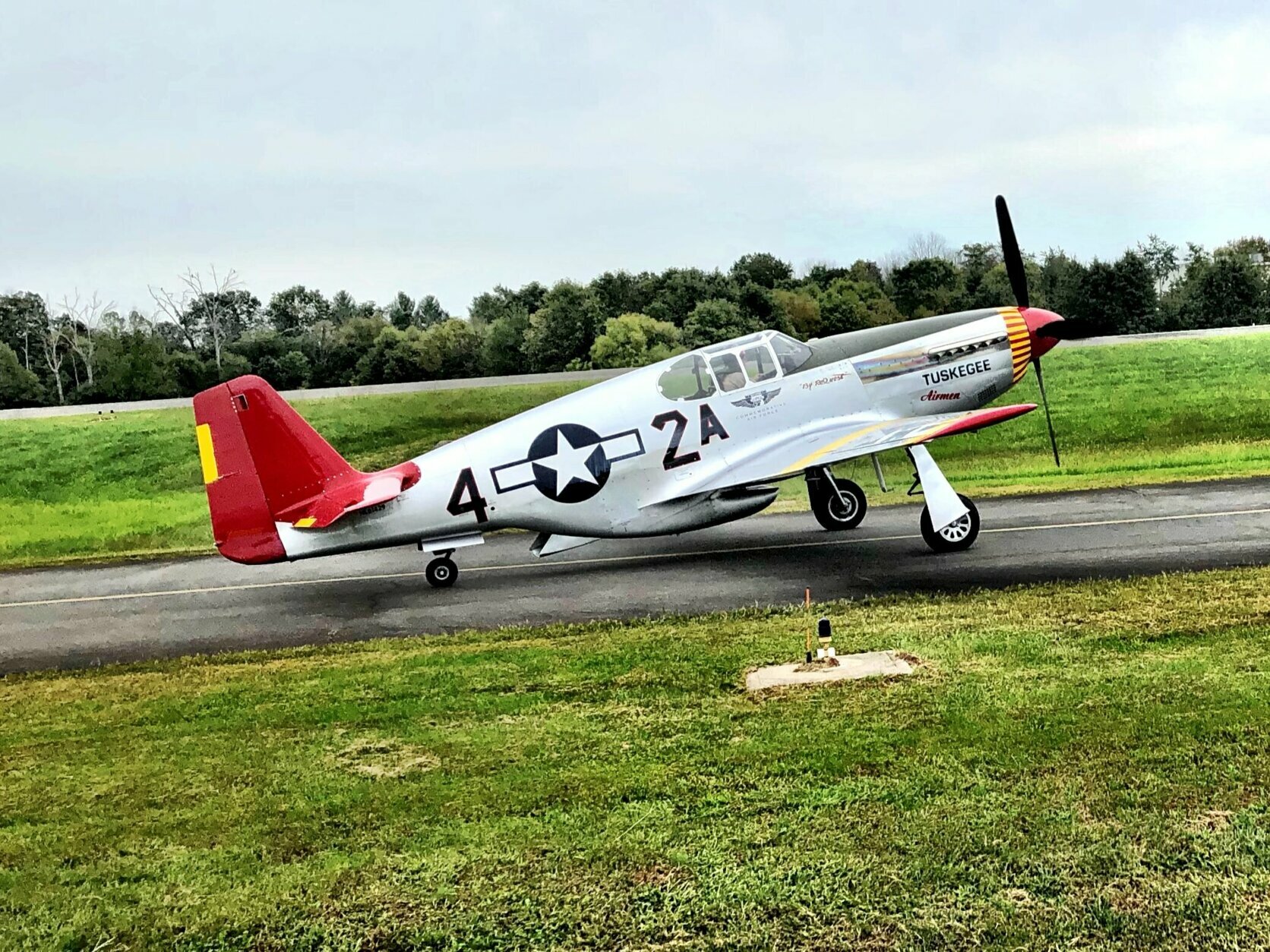 3/4
The flyover honors those who fought for democracy. (WTOP/Neal Augenstein)

While the sight of precise choreography of military aircraft is enjoyable to watch, Ginter hoped the focus will remain on the fight for democracy.

“That’s worth America remembering. I mean, with what’s going on today, that’s a good thing. And our World War II veterans who fought for that freedom, that’s worth remembering.” 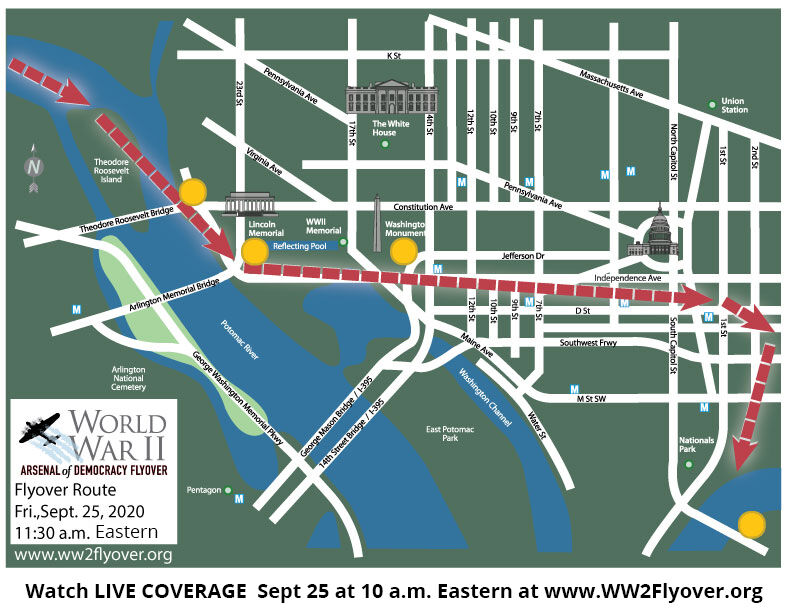