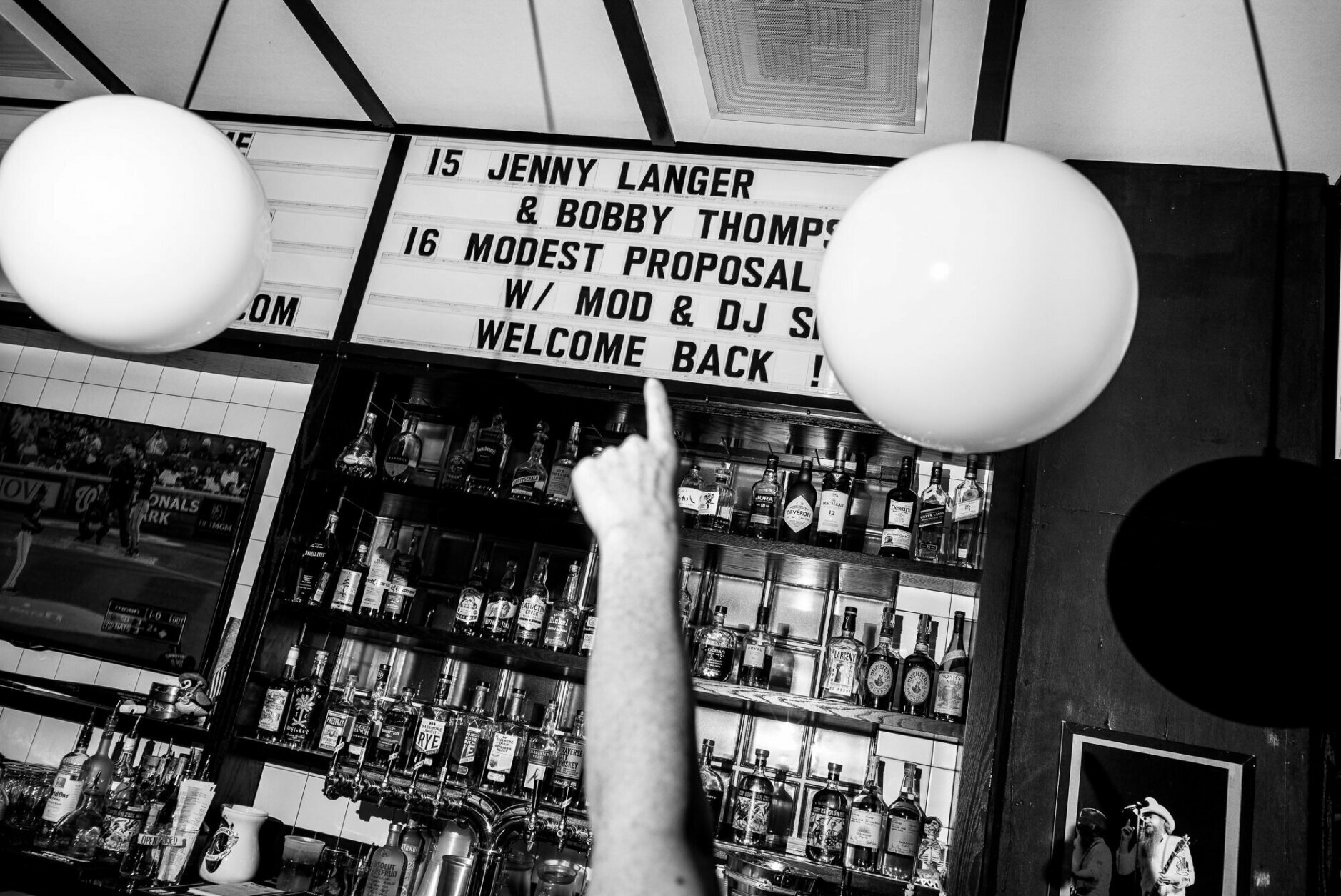 1/17
After 16 months, the five-times-rescheduled show went on at Pearl Street Warehouse. (WTOP/Chris Suspect)

The show had been rescheduled five times since March 2020. But Friday night, the celebration of  D.C.’s 1980s small but devoted mod scene outlasted delays caused by the coronavirus pandemic.

And, for the first time since a smaller reunion show at Comet Ping Pong in 2009, I’d be climbing back on stage as lead singer for Modest Proposal, at Pearl Street Warehouse, a wonderful venue on The Wharf in Southwest D.C. 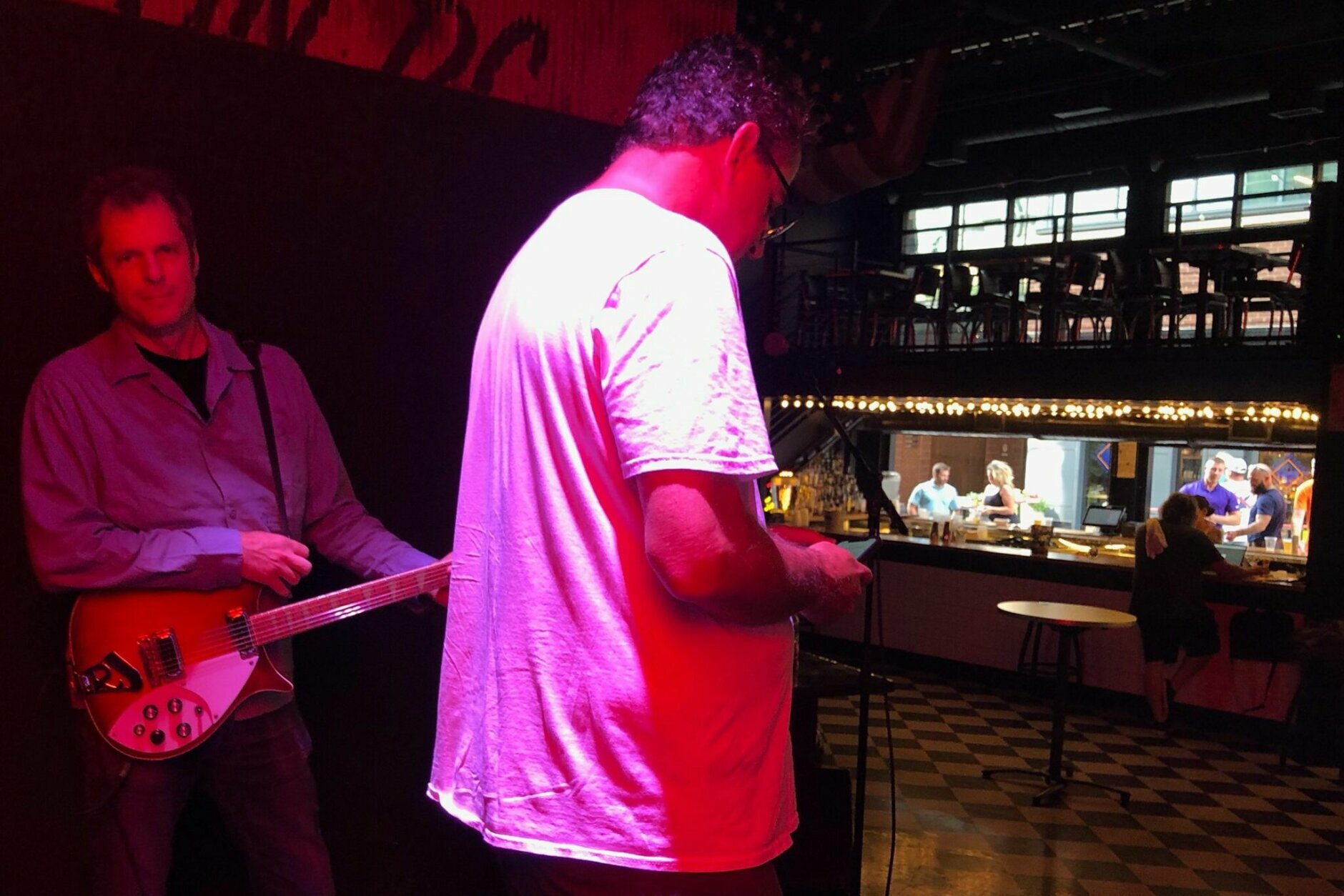 Long before the first notes, there’s hours of activity in the club. We loaded our equipment in at 4 p.m. Fellow Modest Proposal co-founder Bill Crandall and I had already checked our families into the hotel right above the club, since we knew it would be a late night. 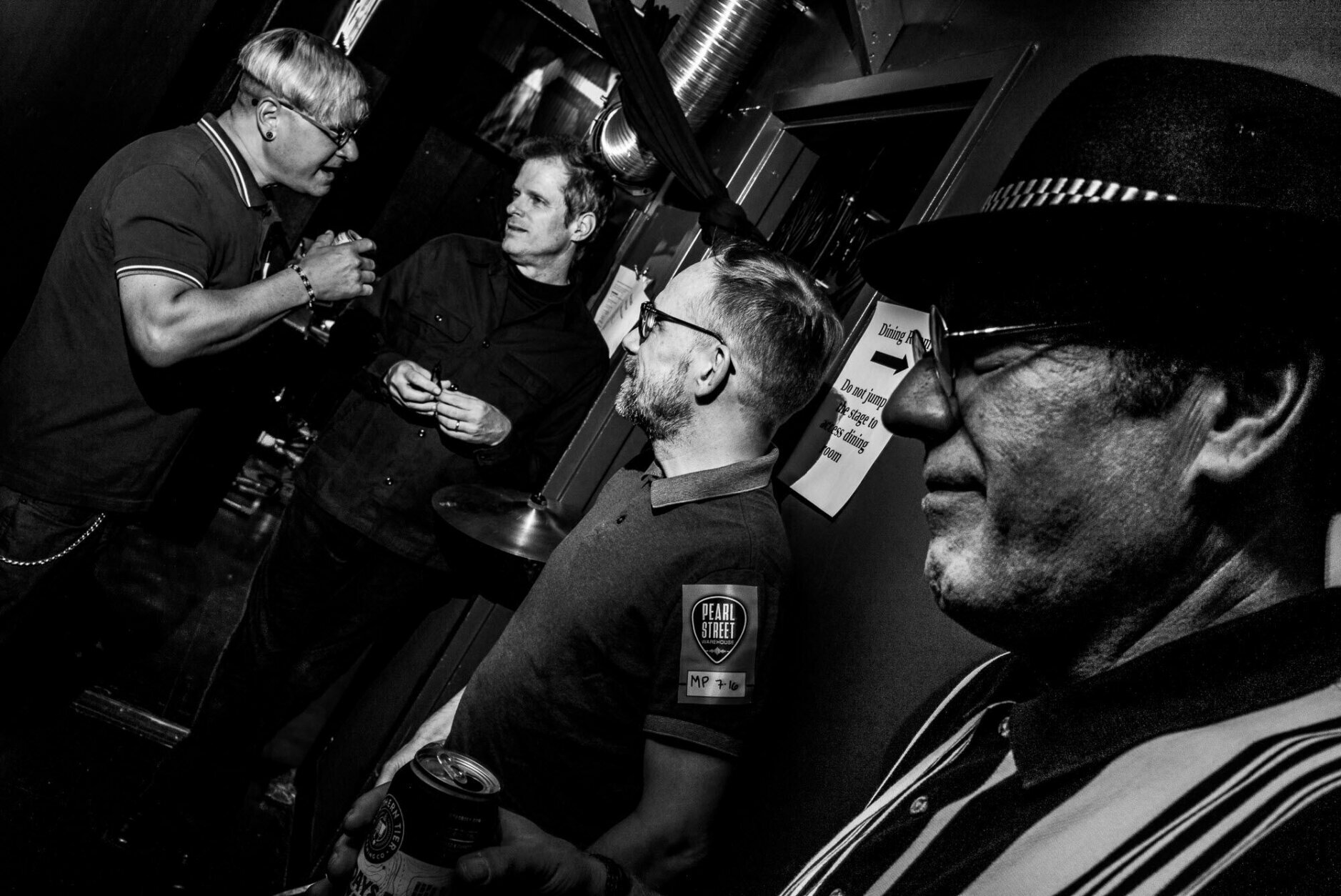 In the 1980s, Modest Proposal played several shows with Mod Fun, from New Jersey. In the dressing room, we had a chance to catch up as DJ Skate warmed up the crowd. 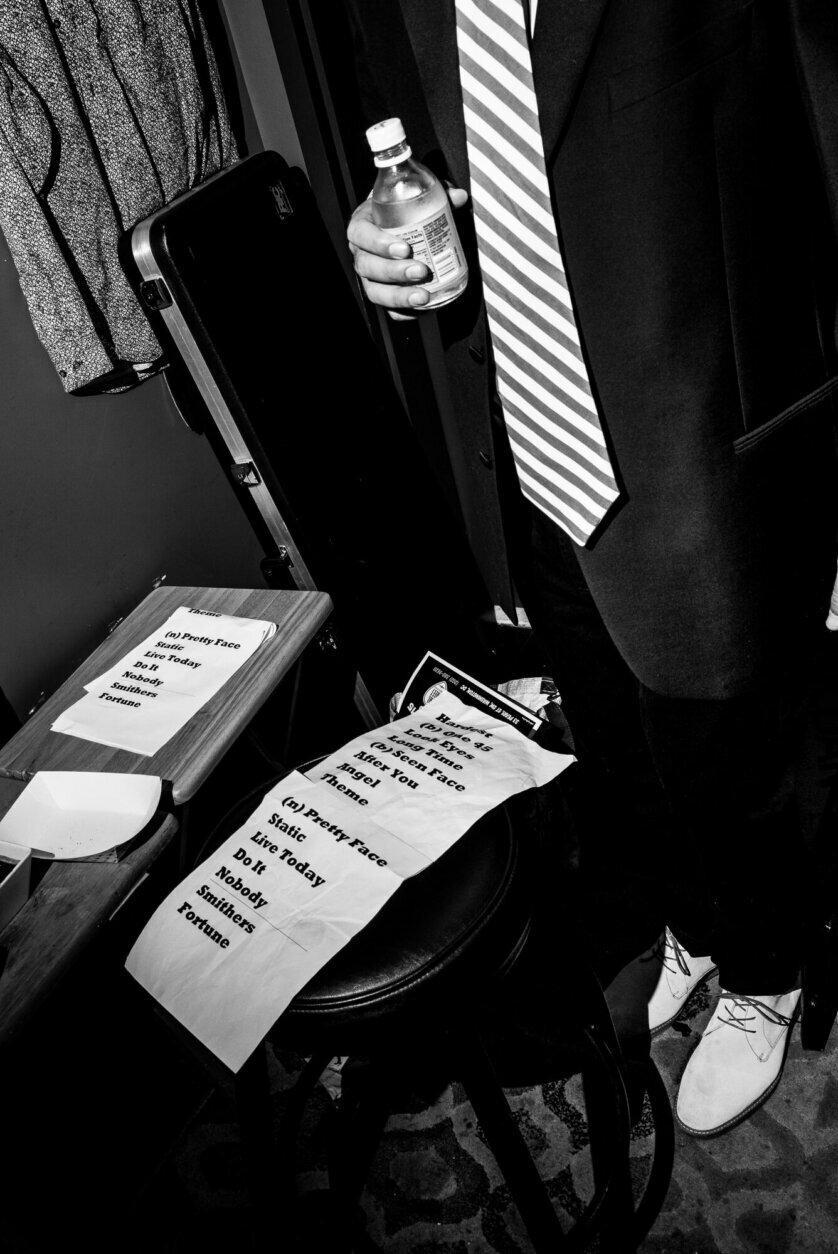 I’d asked my talented neighbor Adrienne to make me a tie out of the same material as my custom-made shirt. And while I used to wear Beatle boots all the time in the 1980s, I figured I’d try something new for this reunion show — off-white bucks. 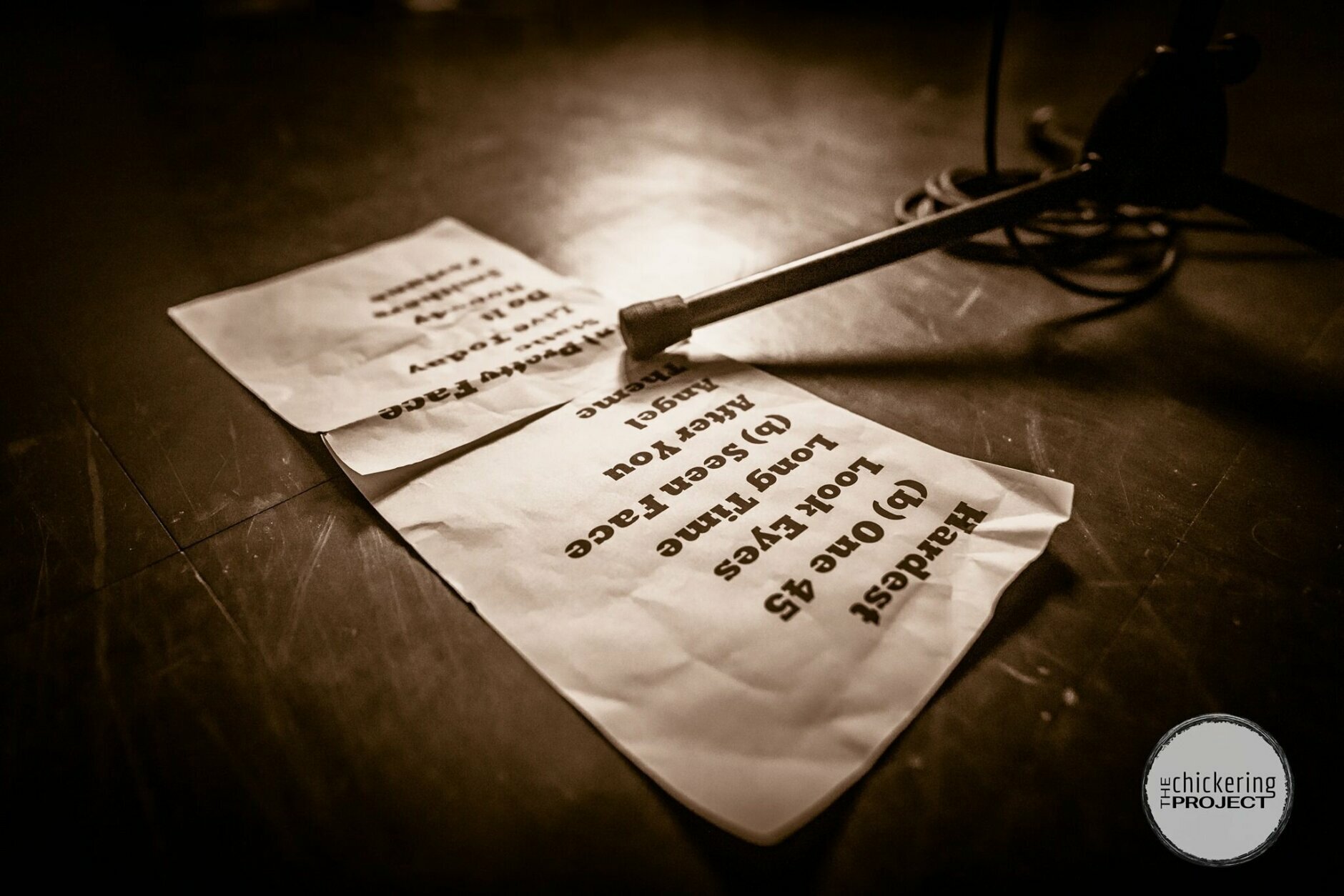 After the COVID shutdown, the band members didn’t see each other for a year, so we had to re-re-learn the songs. Thankfully, they came back to us after a few weekly rehearsals. In the old days, a set list was scrawled on a piece of paper with a Sharpie. Now, with 60-year-old eyes, we printed the set lists with an extra-bold font on two pieces of typing paper that were taped together. 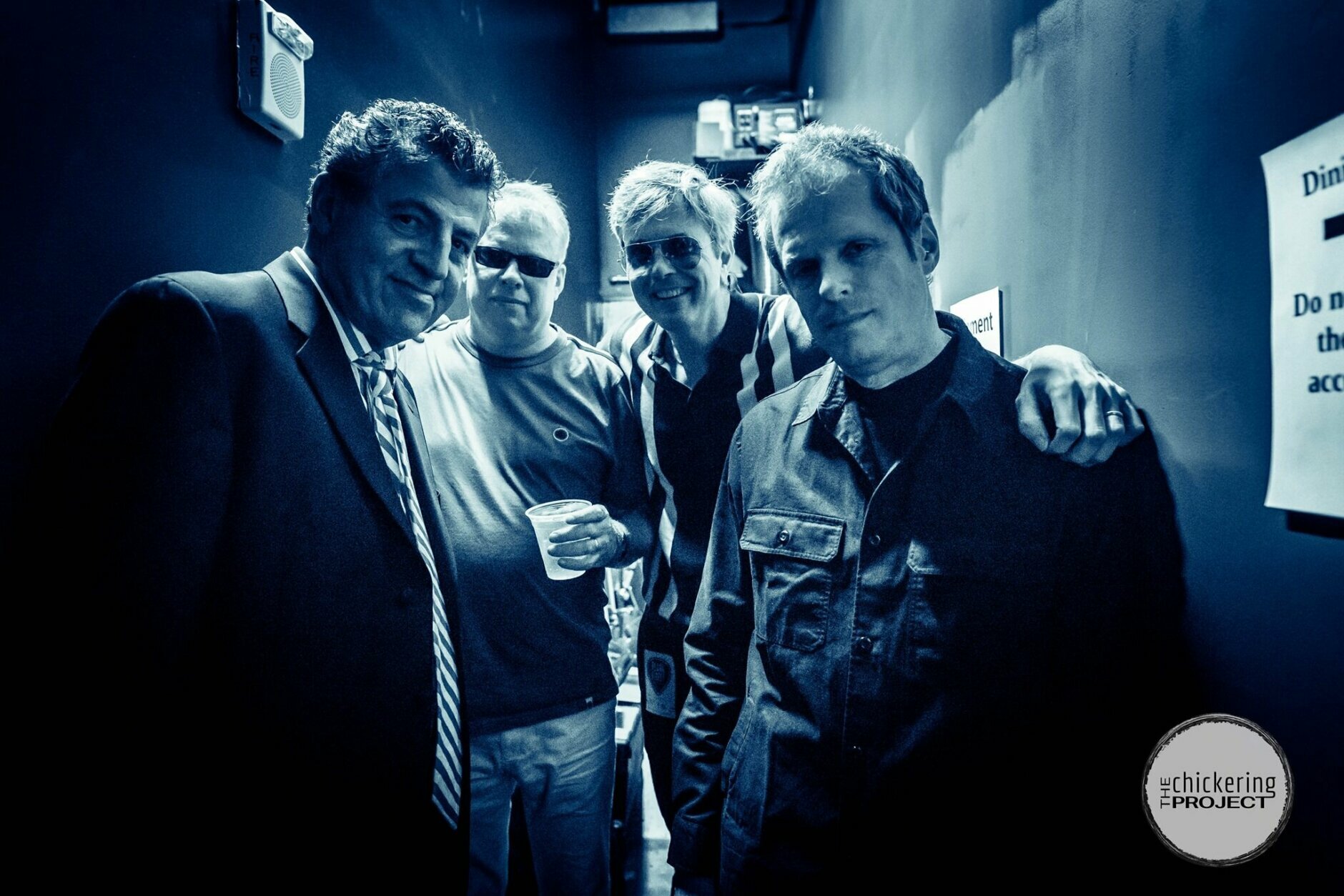 Moments before we took the stage, we gathered in the hallway to capture the moment. Danny Ingram, Hunter Bennett, Bill Crandall and I are all dads, thankful for the chance to have our families in the audience for the big show. 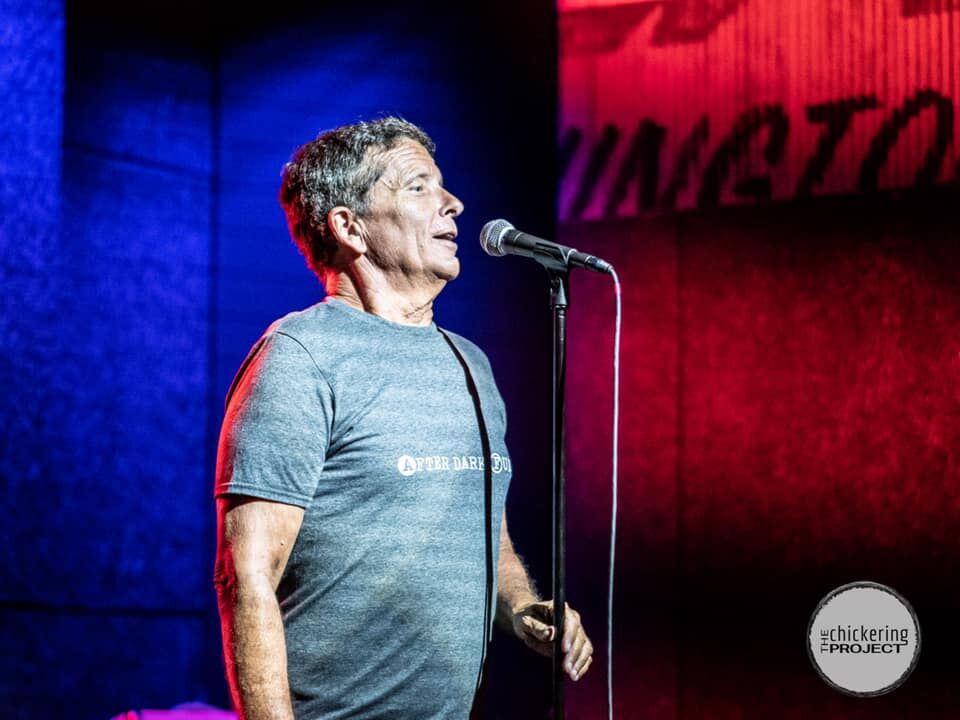 This show wouldn’t have happened without Mark Segraves — my former WTOP co-worker who now is a TV reporter with NBC Washington. In 2018, he cofounded the After Dark Fund, a charity that helps local musicians who have fallen on hard times. When he and I discussed the possibility of a band reunion and benefit, he suggested Pearl Street Warehouse and made the introductions. Friday, he emceed the show and introduced the band. 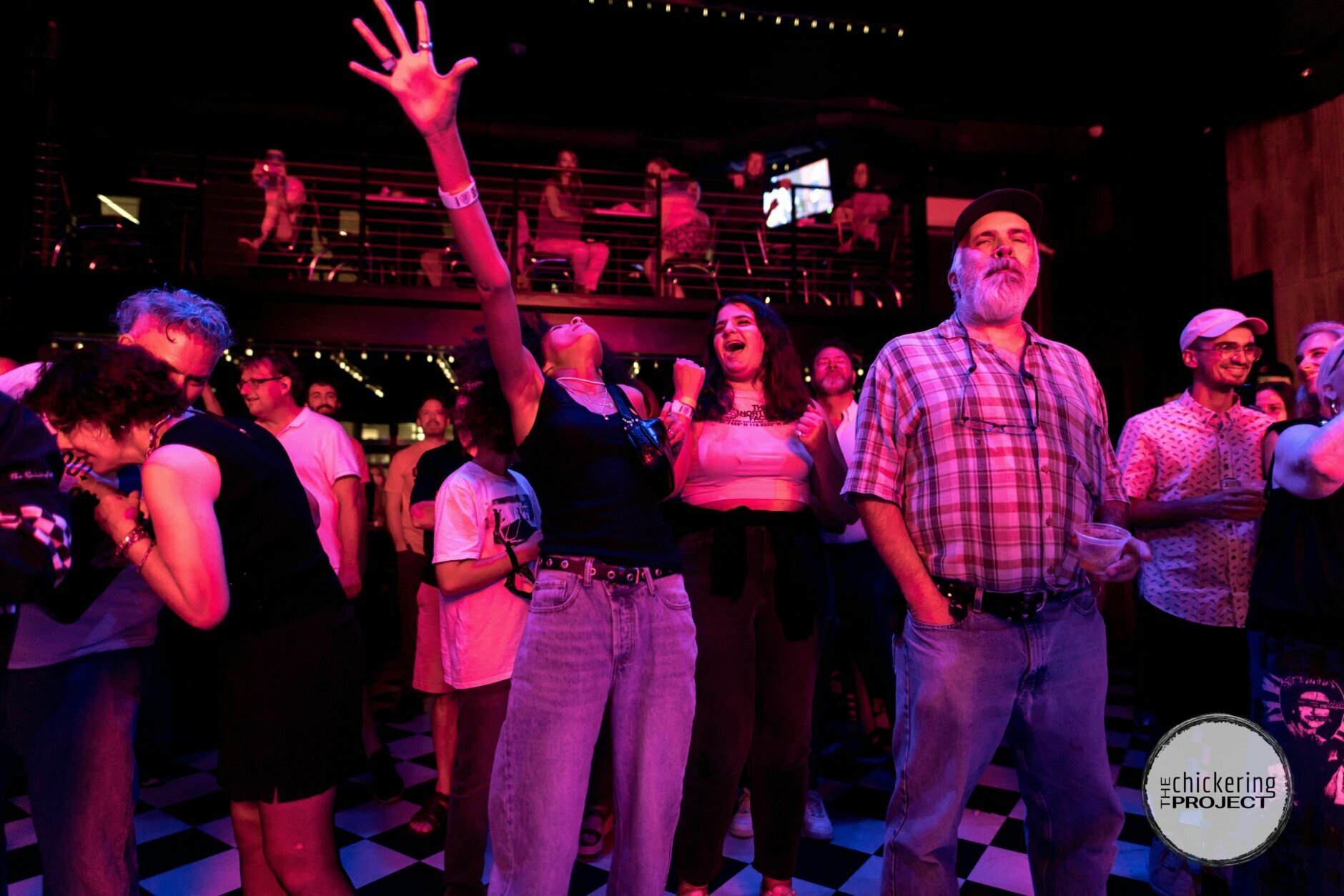 The crowd welcomed Modest Proposal warmly. Walking out and seeing the smiling faces of people there to hear the music, and maybe even dance, is an exhilarating feeling. 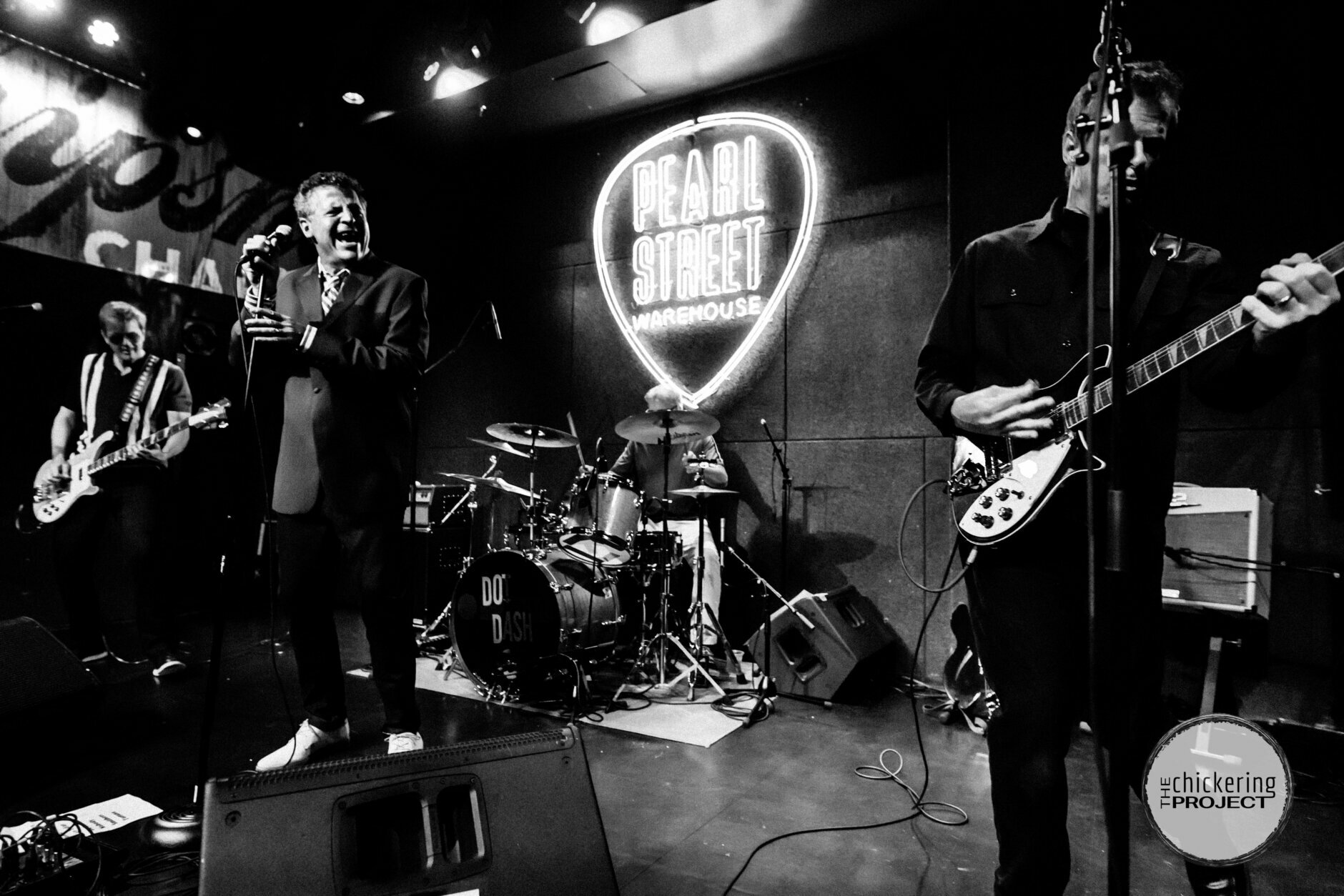 We started the night with one of the first songs the band ever wrote, in 1983 — “Modest Proposal.” Clearly, in the ’80s we thought it cool to have an eponymous song. In 2021, we played it first because it was easy! 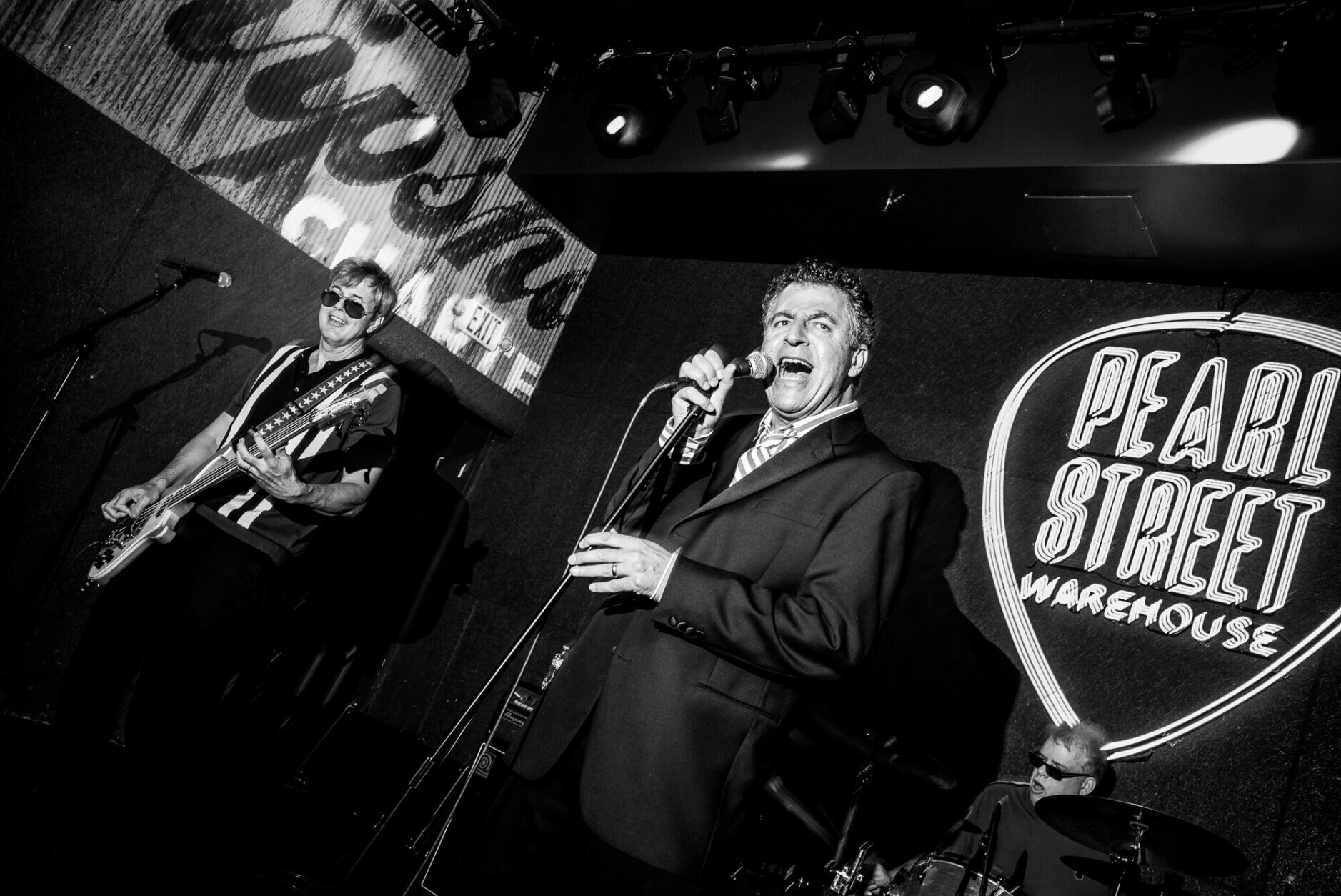 You may not know it, since my job involves talking to tens of thousands of people on the radio every day, but I’m shy. But as a frontman (and reporter), my job is to be engaging, so when I get nervous, I just “pretend to be a frontman” or “pretend to be a reporter,” which makes it easier. 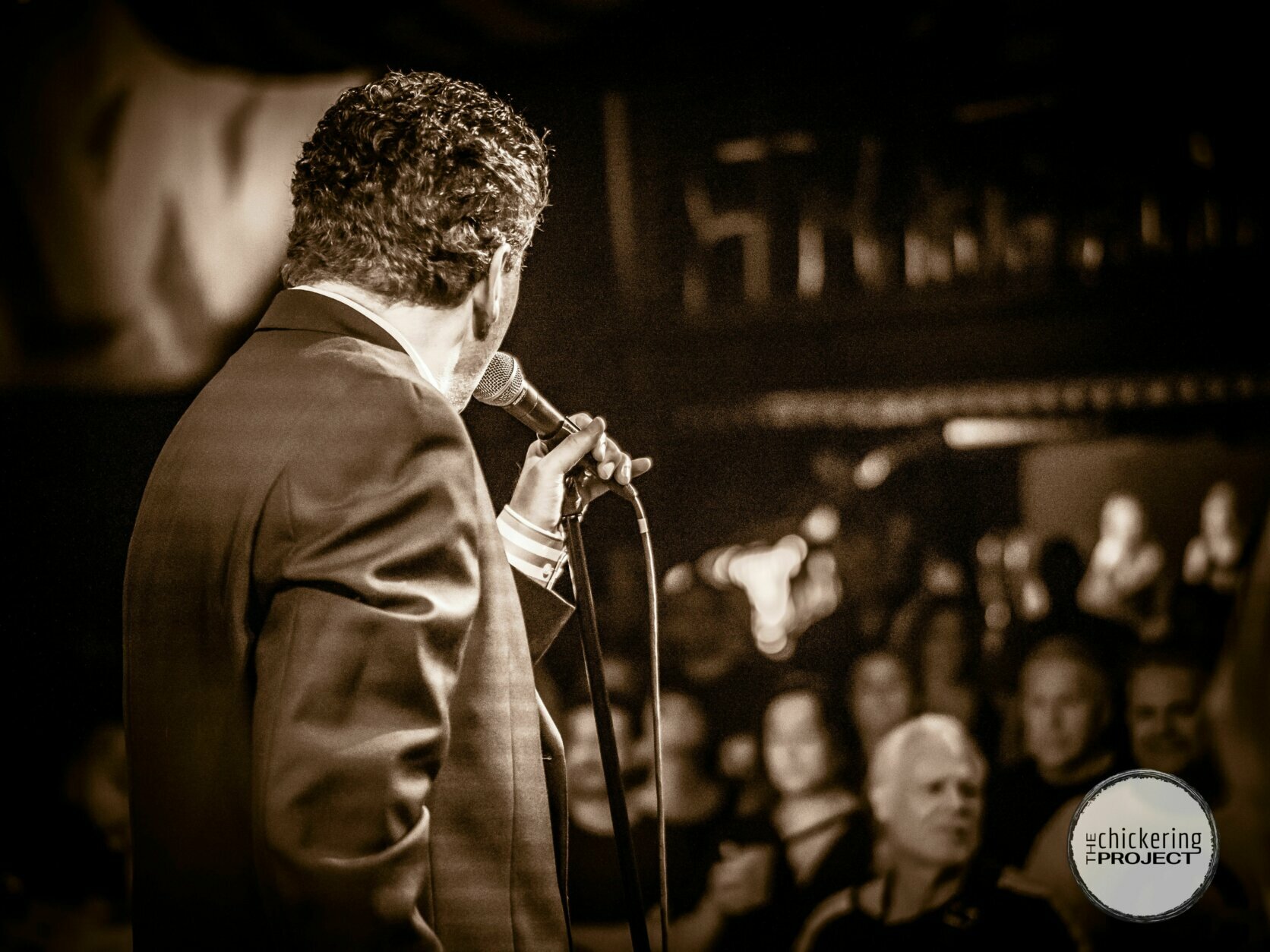 I was so thankful to look out at the crowd and see them enjoying the show. I must have taken it for granted in the 1980s, but when I think of the generosity of people who paid to buy tickets, and stood up close to watch, and seemed to enjoy the experience, I’m moved. 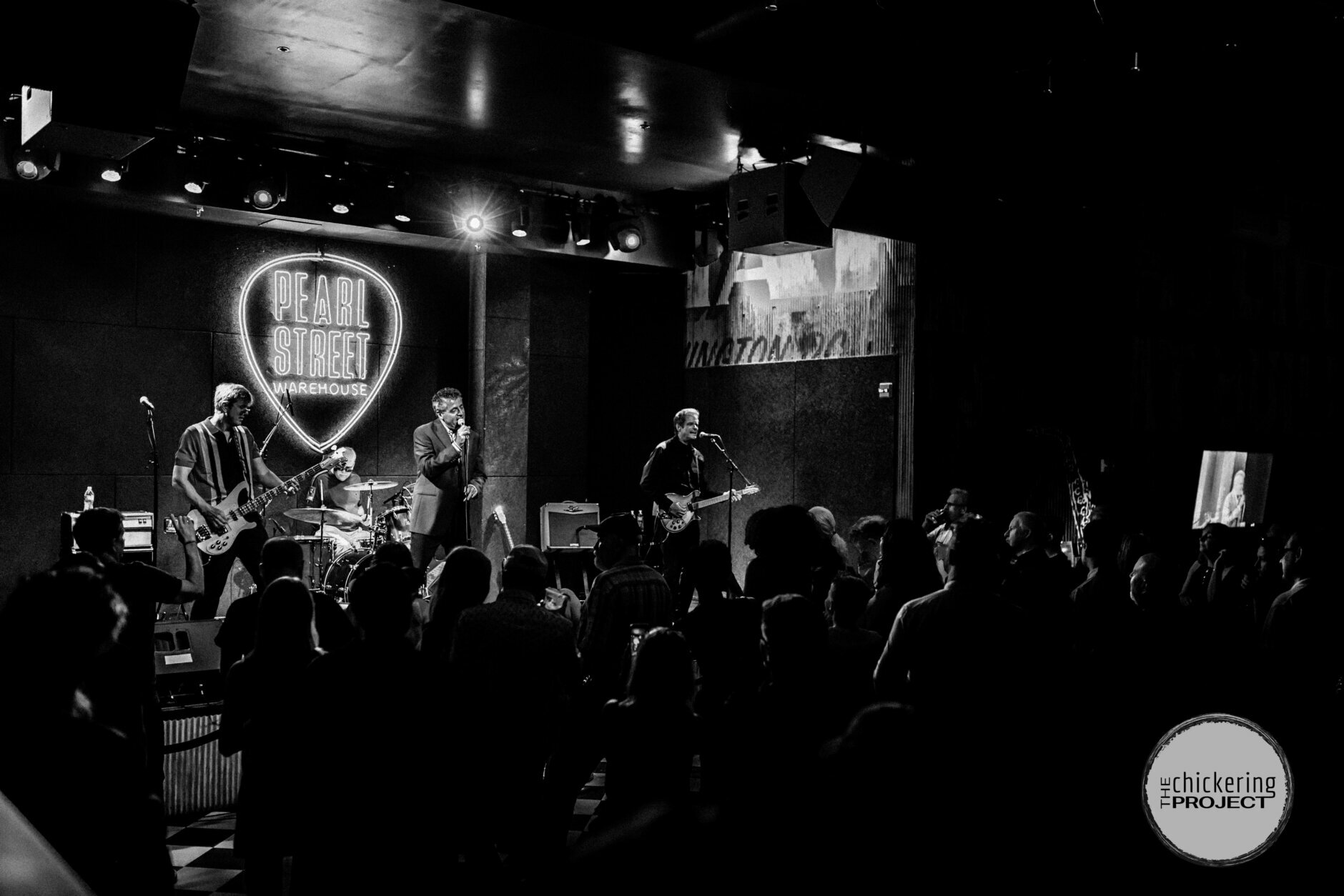 Several months ago, during the height of COVID, Pearl Street Warehouse was limited to hosting 35 seated customers, wearing masks. No standing, no dancing, and audience members had to be yards away from the band. What a relief when social distancing restrictions were relaxed. 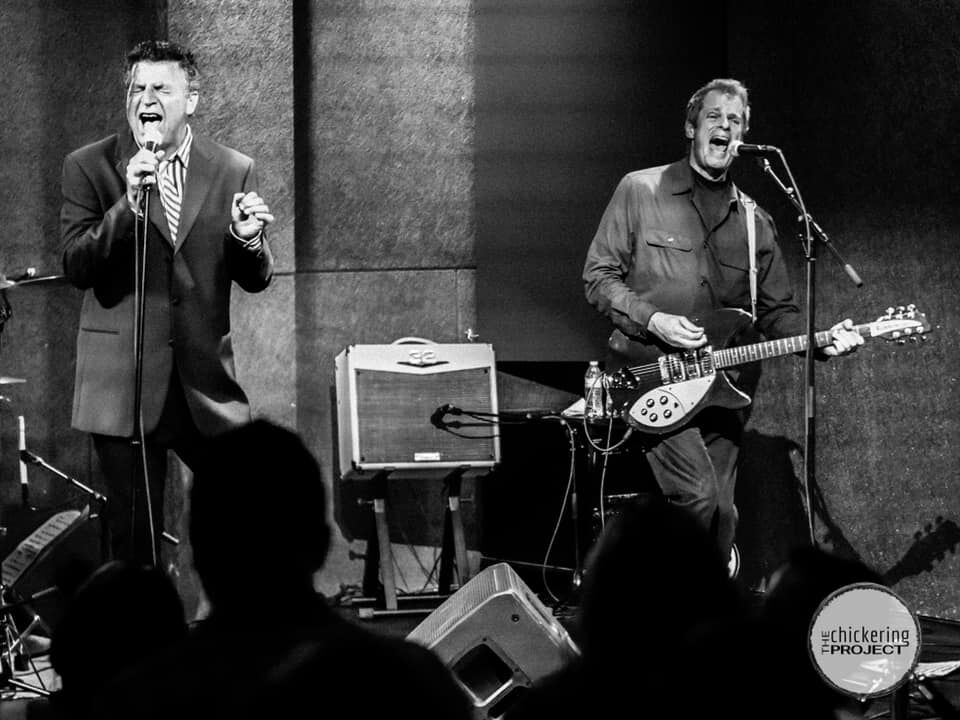 13/17
Rejuvenating a partnership with my old friend. (WTOP/The Chickering Project)

Even though we’ve remained friends since Modest Proposal was formed in 1983, and see each other often since our wives and kids are friends, it’s been rewarding to work together closely with Bill in executing the show. 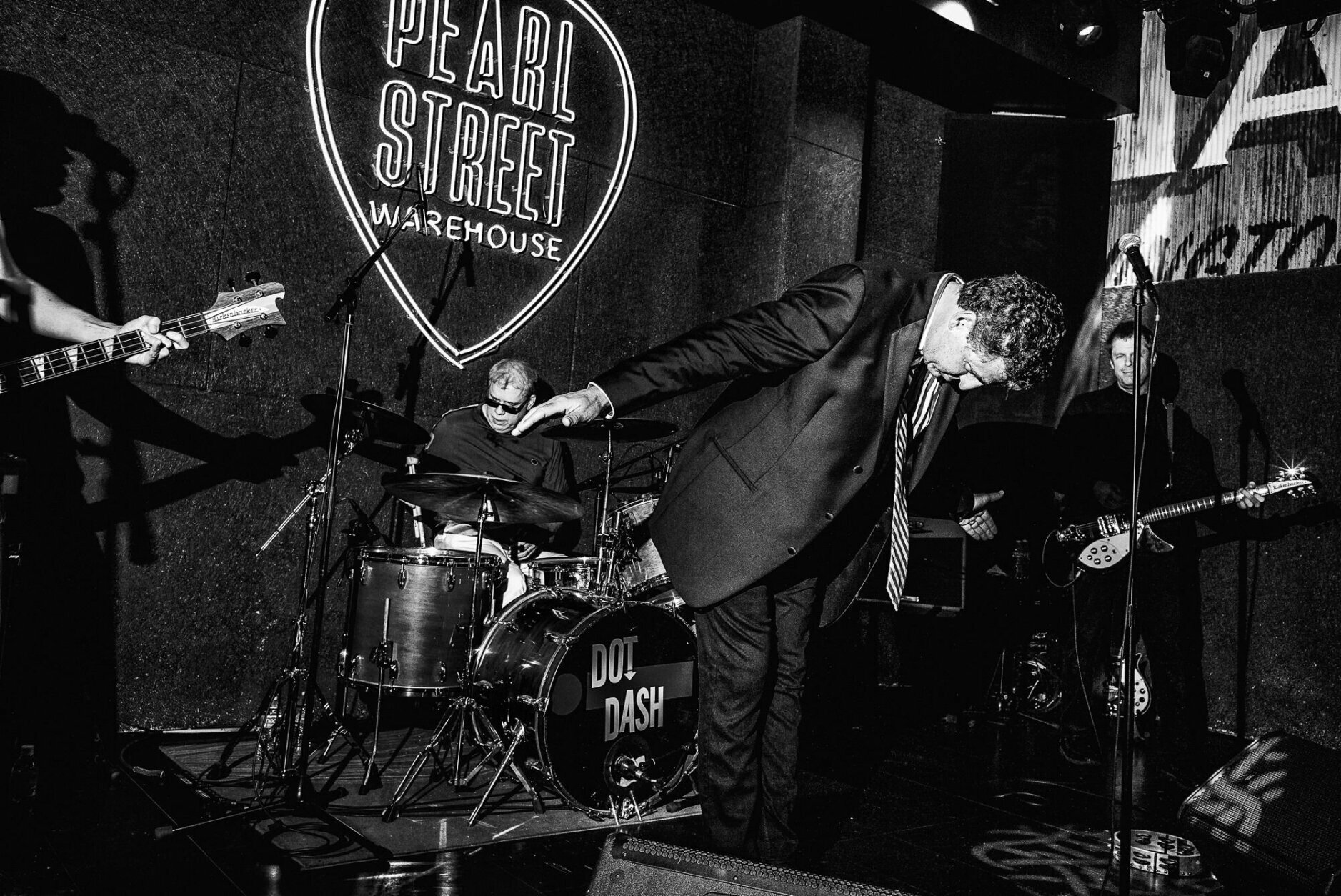 An hour after we began, we were done. Our final song was actually a slow song. The lyrics end, “You’re much more than fortune and glory, too.” 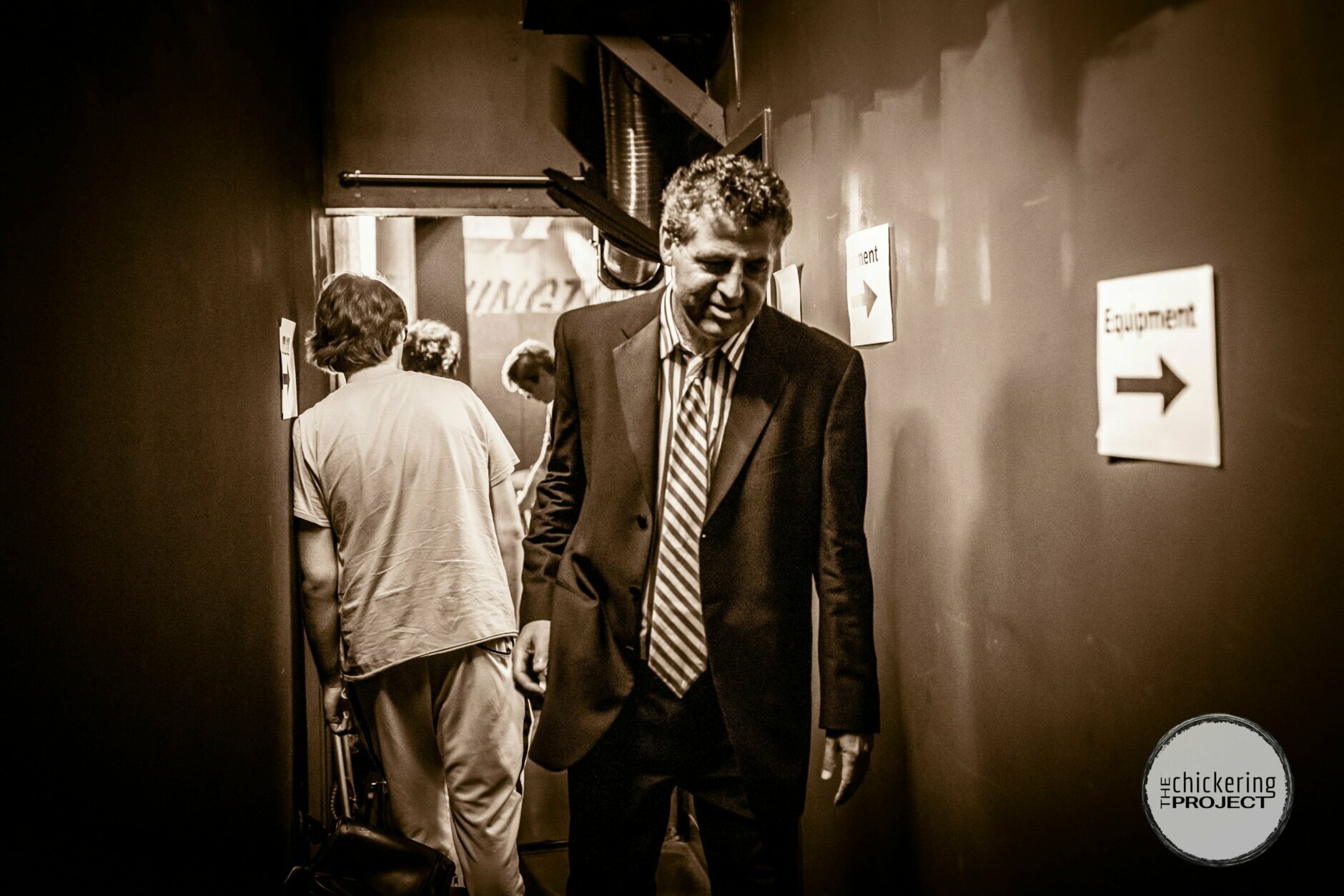 Since I don’t have to unplug any instruments, and as the leader of the band, I’m the first one off the stage. After spending an hour on stage working with the guys in front of a large audience, it was a temporarily lonely feeling to be back in the dressing room on my own. 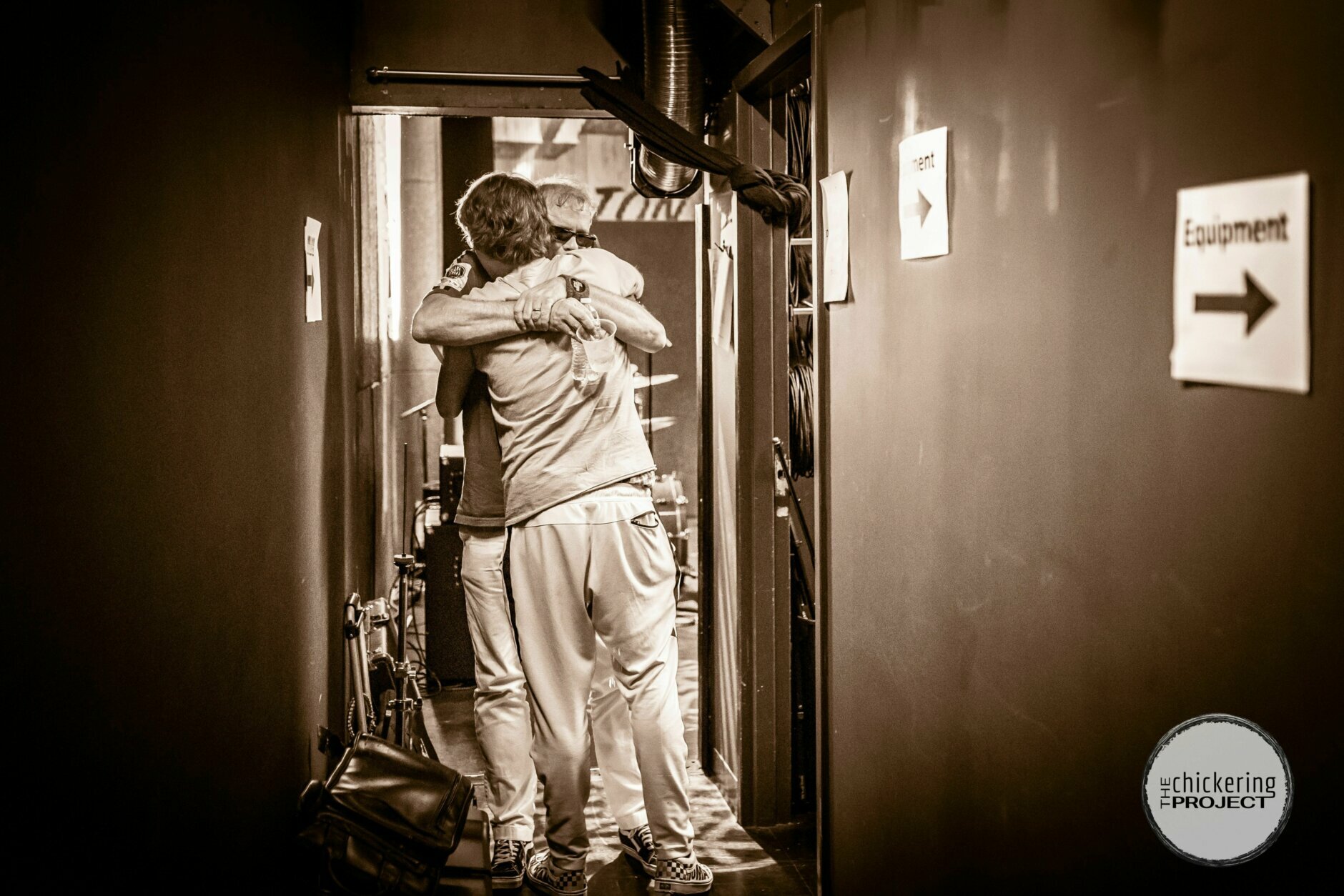 16/17
An emotional moment for father and son. (WTOP/The Chickering Project)

Drummer Danny Ingram’s son Sam had been our crew member, helping Danny schlep his heavy kit and hanging with us backstage. Clearly, this moment meant something for them both. 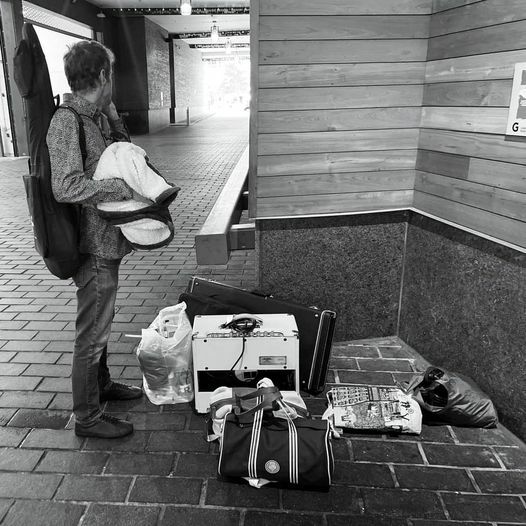 After a good night’s sleep in the hotel, and a nice brunch on The Wharf with friends who had stayed overnight, it was time to wrap things up. Two guys who hours earlier were reliving their glory days in the spotlight were loading up their cars to go home with their families.

While there are no future Modest Proposal shows planned, I think we all know that we’d ‘get the band back together’ if the right opportunity presented itself. In the meantime, I won’t be quitting my day job.