Car Review: BMW X4 M40i might lack space but makes up for it in performance

If you want an SUV-crossover, BMW pretty much has you covered with a full line of SAV’s or Sport Activity Vehicles. The X vehicles, as they are known at BMW, seem to follow along like their cars. Odd numbers are your traditional-looking SAV models; even number Utes are racy and look more like a coupe than an SUV.

The X4 stands out with its different look. It looks hunkered down and more carlike in style, without a tall body. No boxy body here. Rather, there’s a sloping roof line that meets ends with a hatchback. It’s a different look, for sure, and, to my surprise, about 70% of the people I asked liked the look. This X4 was the sporty M40i model that packs a punch under the hood, but also comes with aggressive-looking front end. LED lighting up front and larger twin kidney grills dominate. I dig the shadowline exterior trim that has a silver matte finish but is not bright, like chrome. Large optional 20-inch wheels add just $950. They look better and fill up the wheel wells. Out back, the daring roof line leads to a power operated hatchback with easy access but is not a huge space.

While I might find the coupe-like body style difficult as a parent with three kids, the performance of the X4 M40i gets two thumbs up. With the 3.0L turbo six and 382hp, the X4 can move, turning this into a Sport Activity Coupe. The snarl from the turbo six at full song is delightful. With standard iDrive AWD, the X4 sticks to the road and is docile in the rain. The X4 M40i can also handle at higher levels than you would expect from a taller Ute. It’s much more carlike until you really push it in corners. Then you start notice the usual higher center of gravity of an SUV.

The M Sport brakes are up to the task of hauling down this quick ride with authority. The eight-speed automatic is happy to provide fast firm upshifts when needed, or smoothly go through the motions during the normal commute. The ride can be firm, if you choose, especially if you select one of the Sport modes. Choosing Comfort seems to be the ride around town, but those larger wheels with low profile tires allow you to feel some of our not-so-good roads around the area. That coupe-like body doesn’t do much for rear vision, either. Choosing the Executive package is worth the $3,700. It adds a nifty Surround View with 3D view. It also shows what parked next to you and whether you have enough space to safely open the doors without hitting something. It also can park for you; just handle the gas and brakes it will handle the rest.

The $69,000 X4 M40i greets you with a comfortable interior. The color scheme is different from what you might think of BMW interior. The beige works well with the black dash, and it melds nicely with the brighter trim pieces. The front sport seats have a lot of power adjustments, and 4-way lumbar proves comfortable and supportive. While the front seats are comfortable, the back seats aren’t for everyone. With limited headroom taller passengers will find it restrictive. The standard panoramic roof lets in needed light — there isn’t as much glass because of the coupe-like roof line.

Cargo space for larger items is limited, but the power tailgate opens wide and the lift over is minimal making for easy loading. The driver is greeted by a virtual set of gauges, but it’s easy to read and having the map in front of your face is nice. Gesture Control allows you adjust the volume without reaching for a knob, swirl a finger clockwise and it gets loud; counterclockwise lowers the volume.

The BMW X4 M40i is a fun-to-drive ride that stands out with the style of a coupe and some of the utility of a crossover. With a powerful turbo engine and performance you don’t expect from a crossover, the X4 is a luxury-lined rocket that makes a statement.

Mike Parris is a member of the Washington Automotive Press Association. The vehicles are provided by DriveShop, FMI, NAVS DC or Motus One for the purpose of this review. 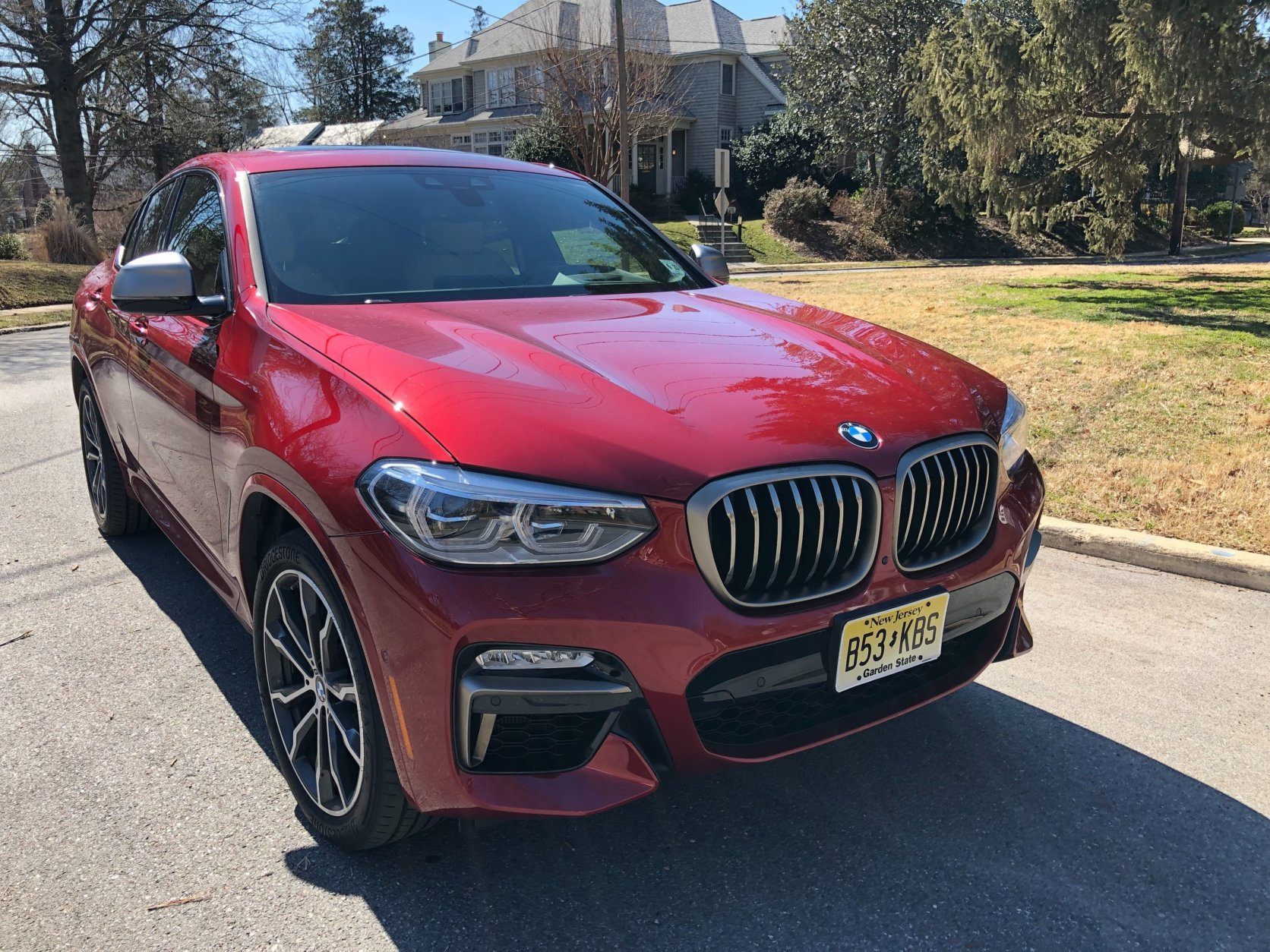 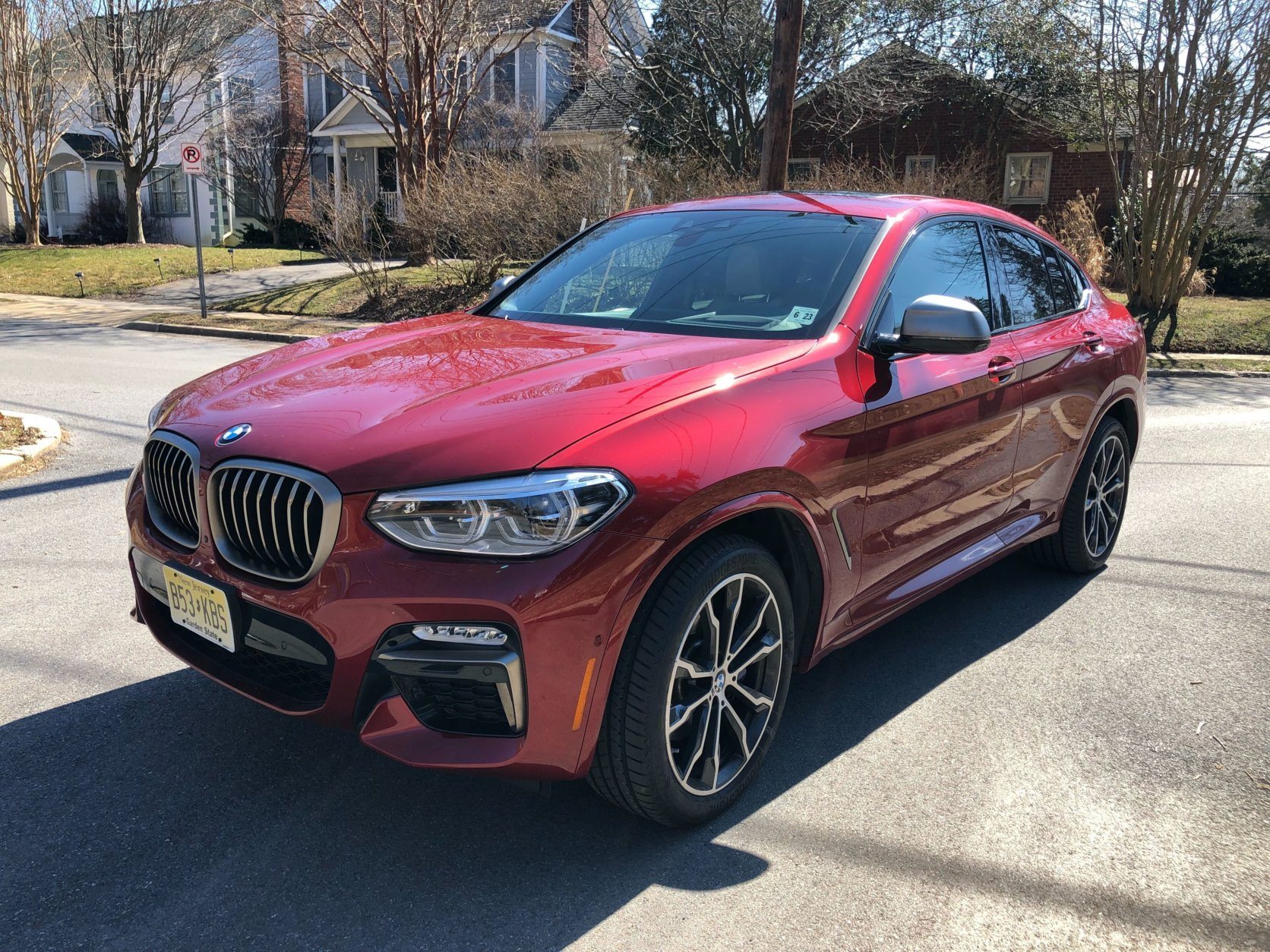 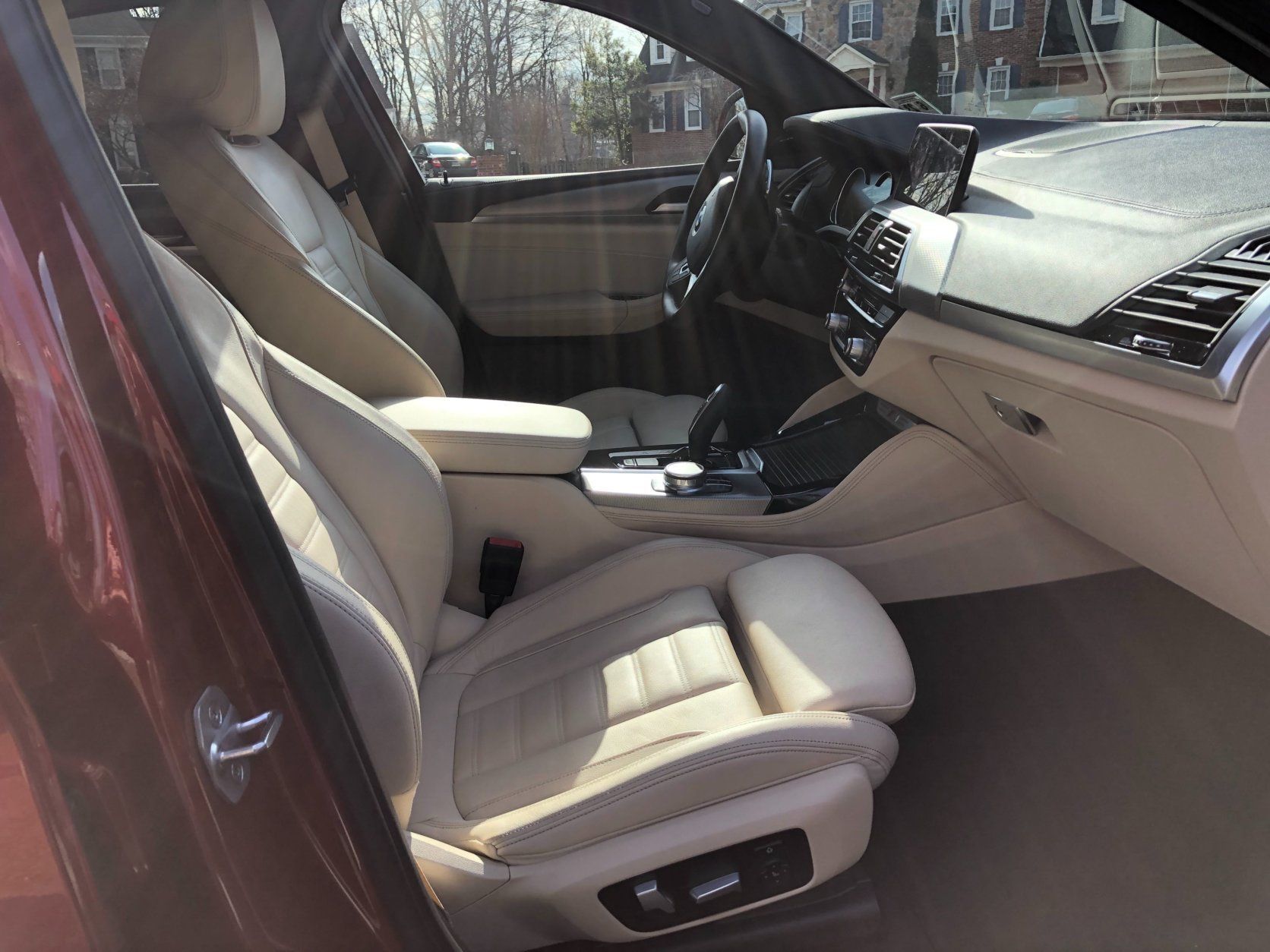 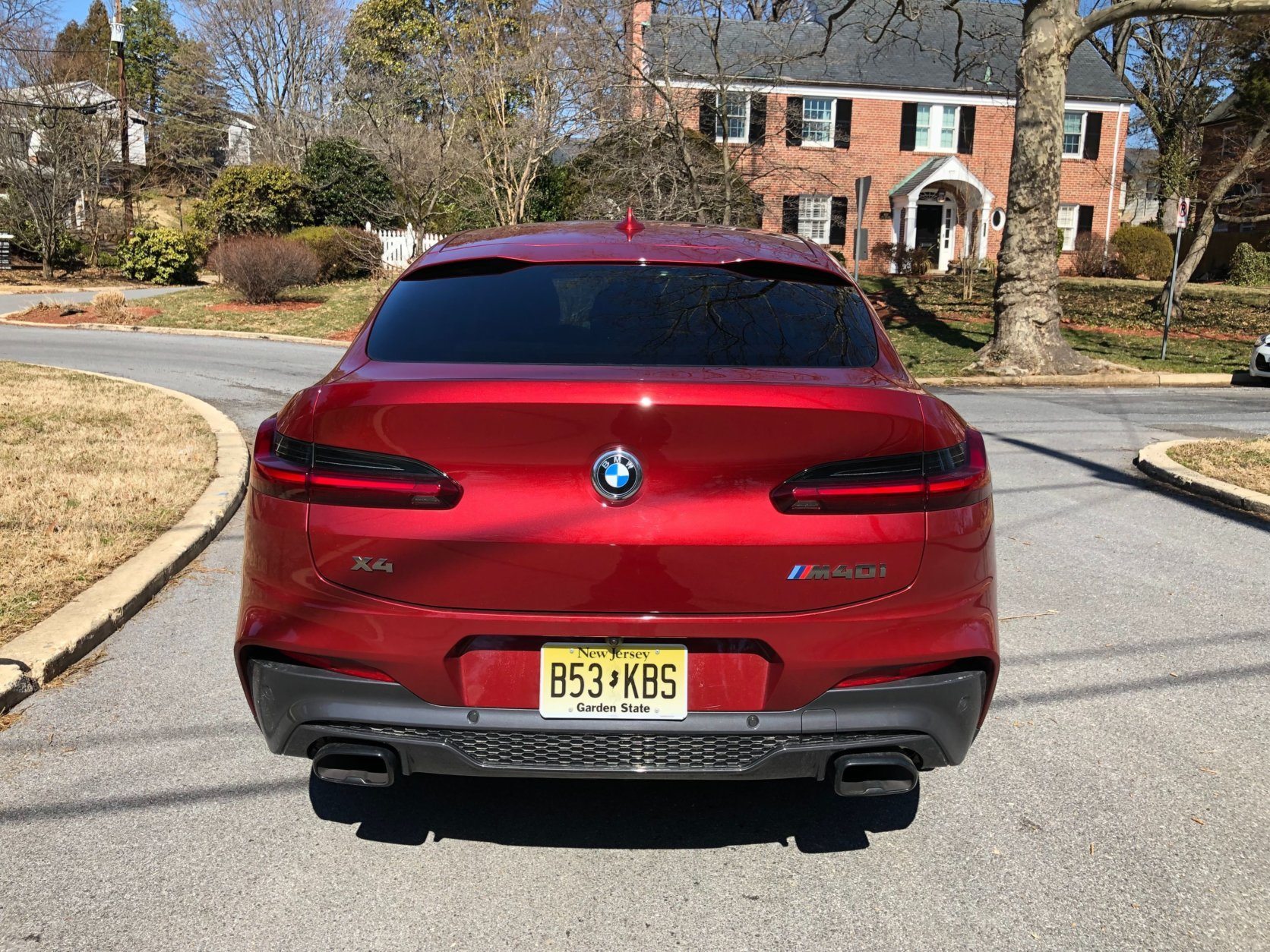 4/7
Limited by a coupe-like layout, the 2019 BMW X4 M40i offers less rear seat space and not much cargo space. 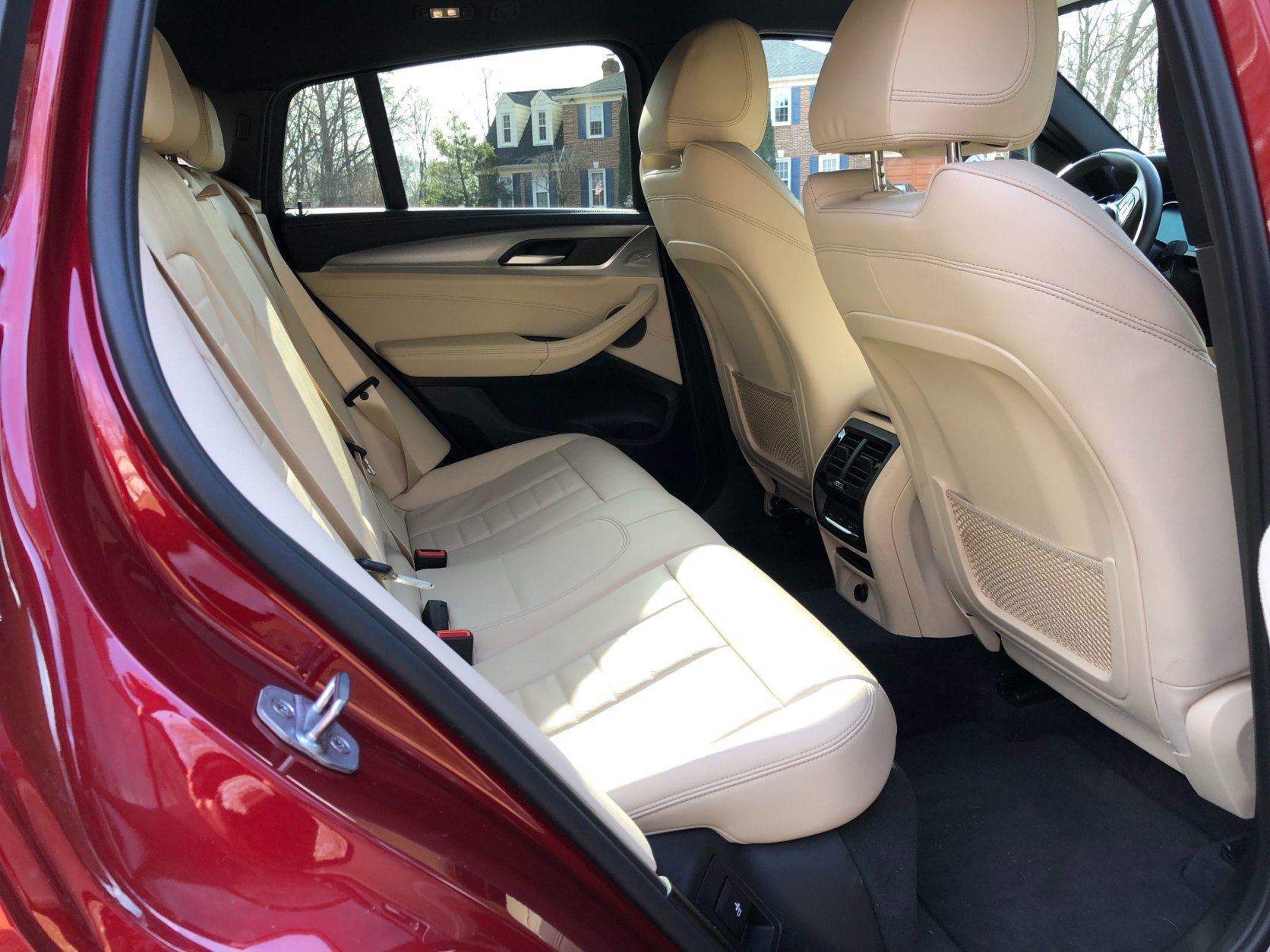 5/7
WTOP Reviewer Mike Parris says the 2019 BMW X4 M40i choose style over utility, which is noticeable in the rear seat space. He says taller passengers might find the back seats restrictive. 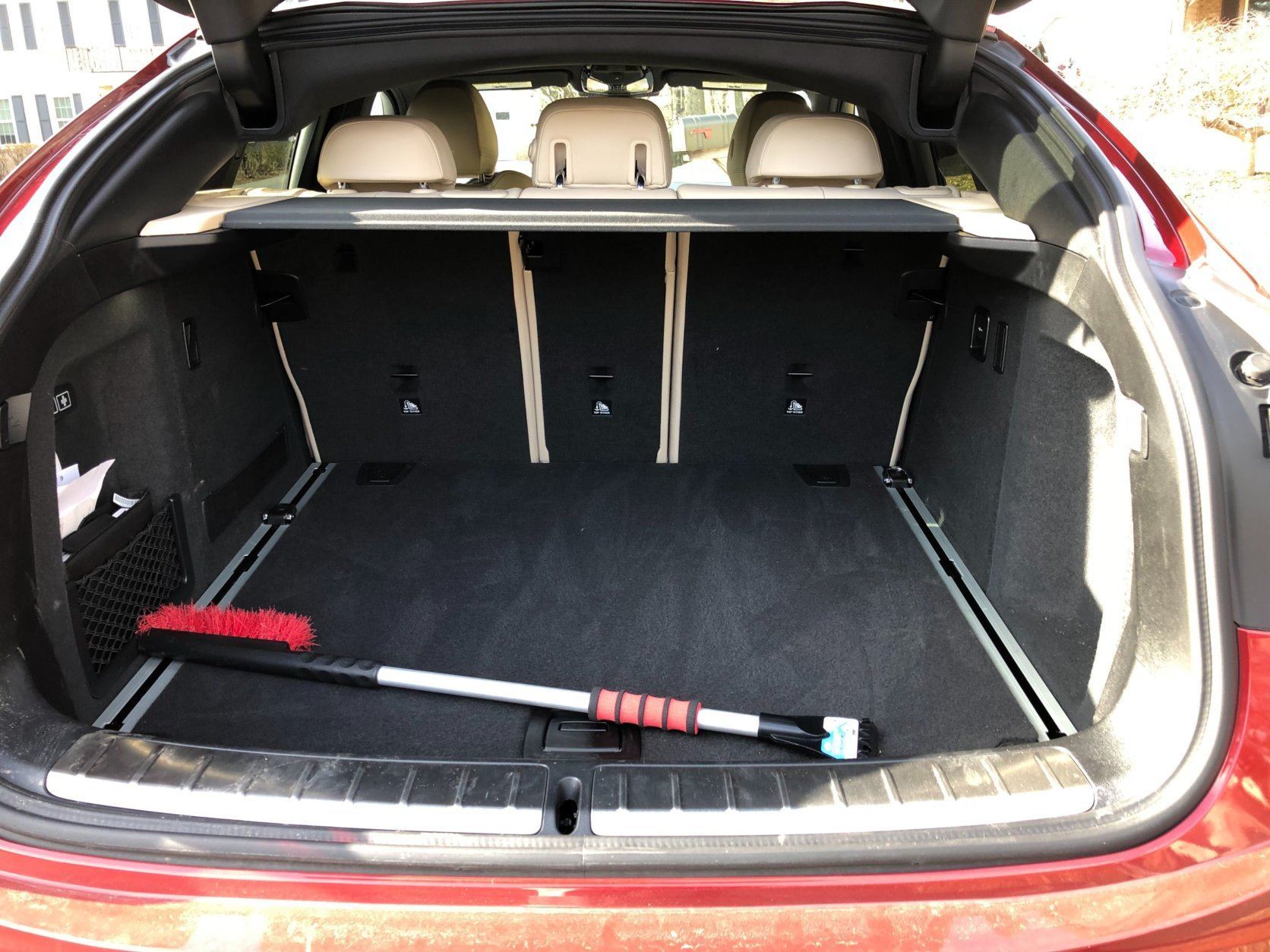 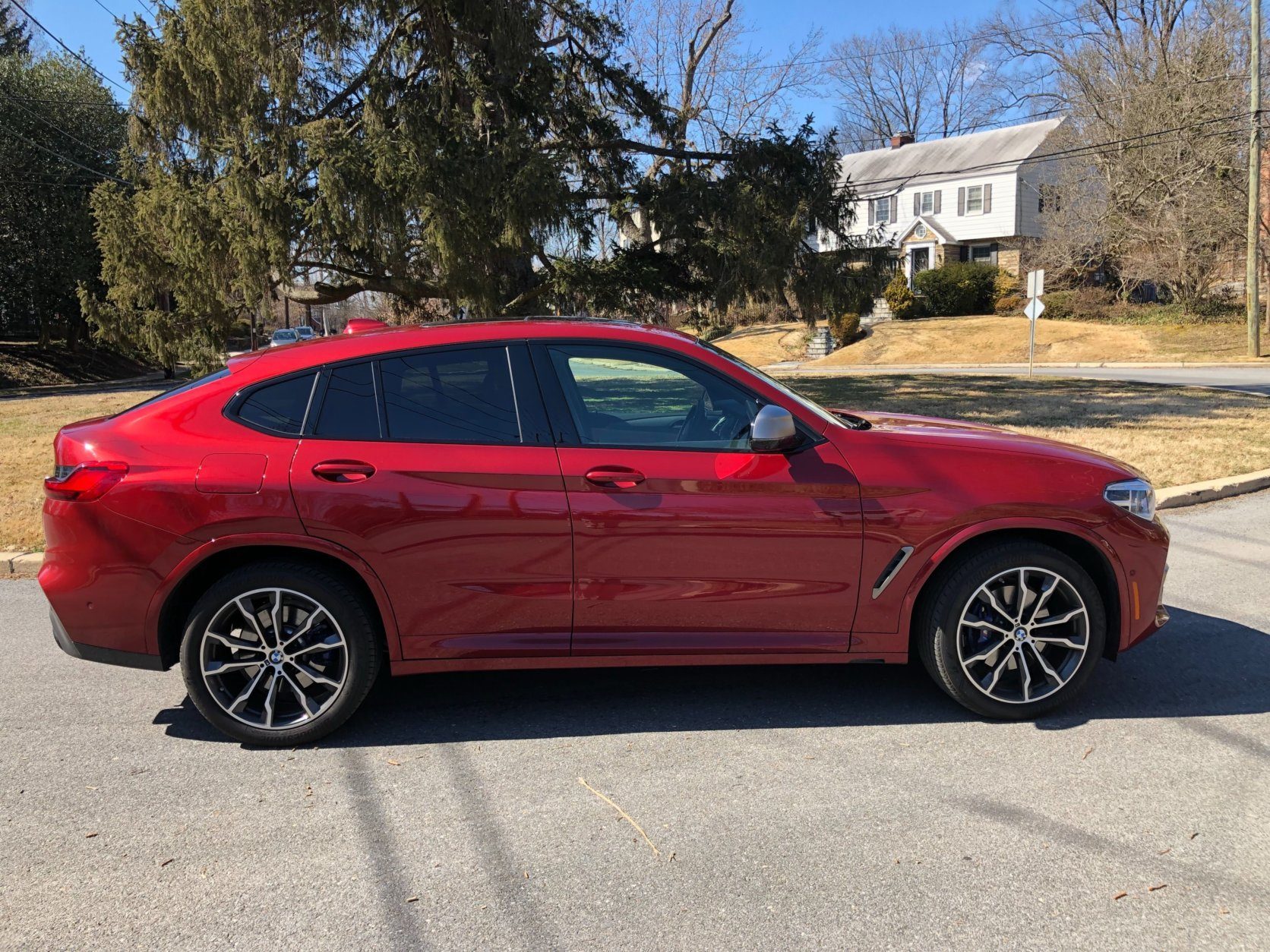 7/7
WTOP Car Reviewer Mike Parris says people with children might have a hard time with the 2019 BMW X4 M40i’s coupe-like body style, but he gives the vehicle’s performance two thumbs up.