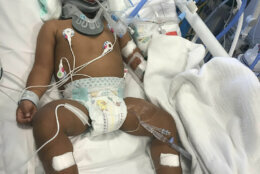 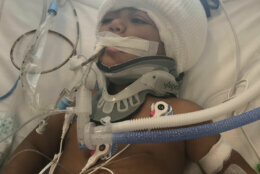 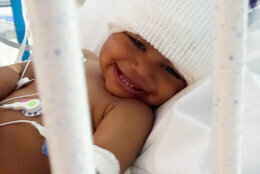 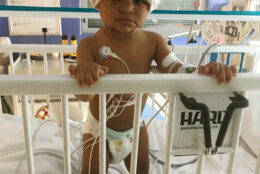 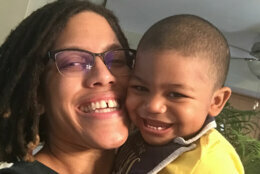 What seemed like a simple tumble turned into a near-death experience for a Frederick, Maryland, 15-month old.

Earlier this month, Alec Penafiel was at the pediatrician’s office getting a checkup and routine shots. As they were wrapping up the visit, his mother, Atheia, turned away to pick up her keys.

Alec tumbled off the table. At the time, she thought he had tried to climb down and stumbled.

“I didn’t see how he fell off the table,” Atheia Penafiel said. “He’s learning how to go off furniture and go feet-first so I was thinking, ‘OK, he did his usual feet first, and then he lost his footing and fell,’ so I didn’t know how long that fall originally was.”

It was a four-foot drop from the top of the table to the floor.

When she took him home, Atheia said Alec seemed OK, settling in for a nap like he always did after a visit to the pediatrician that included shots.

But four hours later, when she went to get him up from that nap, she realized something was very wrong.

“I rolled him over and that’s when I could see his face, he had a pained look in his face with his eyes tightly closed,” she said.

And when she sat him up, things got worse.

“When I had him sit up is when he vomited,” she said. “And then his left eye was looking at me and his right eye was looking up towards the wall. Then he wouldn’t open that right eye anymore. Then it looked like he was having a seizure.”

She called their pediatrician, who told her to call 911.

He was rushed from their home by ambulance, then flown to John’s Hopkins in Baltimore, where a medical team was waiting.

“While he was arriving back in the helicopter, they noted that he had swelling of the scalp and also that he had a dilated pupil on the right side,” said Dr. Alan Cohen, Director of the Johns Hopkins Pediatric Neurosurgery Department.

A CT scan showed Alec had fractured the right parietal bone, the bone behind his right ear, and that he had a very large blood clot inside the skull, outside of the brain.

“It’s called an epidural hematoma,” Cohen said. “This fracture tore a blood vessel, an artery, and there was blood expanding inside his skull, pressing the brain.”

The dilated pupil is often a warning sign that death is imminent, according to Cohen — the body’s way of saying it is not going to handle the brain compression much longer.

Alec was rushed into the operating room for a craniotomy.

“We make an incision in the scalp, and take a trap door piece of the bone off on the right side of the head,” Cohen said. “Right under that bone was the blood clot.”

During the two-hour surgery, they were able to remove the clot and stop the bleeding.

Cohen said concussive injuries can be misleading, making you think someone is OK, when very serious things are going on in their brain, in what they call a lucid interval.

That’s a case where the person acts normal, but the compression is increasing on the brain as the clot grows. In this kind of case, the patient begins to deteriorate very rapidly, and the time in which they can be saved is short.

Cohen said if things had taken much longer, the outcome could have been very different and Alec may not have made it. A few minutes more could have cost the boy his life.

“This is a matter of, they say, ‘time is brain’ and the longer that we wait, the bigger the hematoma gets,” Cohen said.

Looking back, Atheia said she has been beating herself up for not figuring out something was wrong sooner, and not telling the pediatrician that he had fallen while still at their office.

But one of the signs that may have been noticed if Alec was awake wasn’t visible when he was napping.

“It’s kind of hard to notice it because the person is awake and they’re talking and stuff, and then they’ll go unconscious — and we didn’t know at the time that he was sleeping, he kept falling in and out of consciousness,” she said.

In the future, Atheia said she will err more on the side of caution and advises other parents to do the same.

“They always tell you kids are young, they heal fast, they will bounce right back. Don’t worry and they fall off stuff all the time,” she said. “But it’s good just to have them get looked at, even if it’s a small bruise or you don’t see any damage, and you think they’re fine.”

“I think it’s her judgment, picking up the fact that there was something not right, that made all the difference and got him here, Cohen said. “He’s going from someone who might not have survived to someone who should have a normal life, and that’s a happy story in neurosurgery.”

There are symptoms parents can watch for if they find themselves in a similar situation.

“Kids bonk their heads a lot, and it’s a very common thing. Things to watch out for as a parent are headaches that don’t get better, profuse vomiting, a seizure (or) something that’s out of the ordinary,” Cohen said.