2 arrested outside White House on charges of assault, flag burning

Two people were arrested, one on charges for assaulting a police officer and malicious burning; the other on charges of obstruction and resisting arrest.
(1/5) 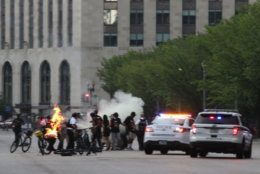 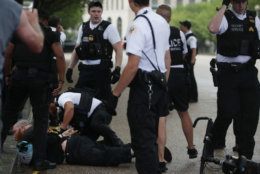 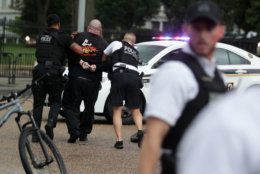 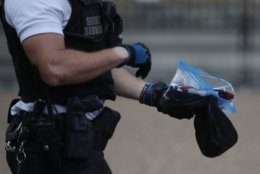 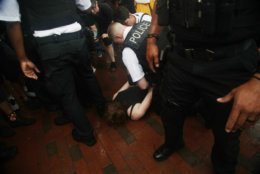 Two people who were protesting outside the White House were arrested Thursday for burning an American flag.

The incident happened on the 1600 block of Pennsylvania Avenue around 5:30 p.m.

U.S. Secret Service said in a news release that a person was burning an American flag, which was outside the limits of a permit issued by the National Park Service.

Two people were arrested, one on charges for assaulting a police officer and malicious burning; the other on charges of obstruction and resisting arrest.

#Breaking: Absolute chaos outside the White House as Johnson lights a flag on fire and is immediately confront by Trump supporters. pic.twitter.com/q8KP04Vvuj

One person was taken to the hospital for minor injuries, and the other was taken by D.C. police.

Two Secret Service officers sustained minor injuries, which they got from attempting to arrest the suspects. They were taken to the hospital.