If you've had a sip of Coke Zero Sugar recently and thought that it tastes a little different, you're not crazy.
Listen now to WTOP News WTOP.com | Alexa | Google Home | WTOP App | 103.5 FM

As you make your way through the soda aisle, you may notice a lot less of the word “diet” than you used to.

That’s because some diet sodas are disappearing — or at least, that packaging is gone. Instead you’ll find those beverages under their new branding: zero sugar.

“Zero sugar” has replaced “diet” for many no-calorie soft drinks. Canada Dry and Schweppes ginger ales, 7Up, A&W and Sunkist, made by Keurig Dr Pepper, now label their diet drinks “zero sugar.” (One exception is the namesake Dr Pepper brand, which will still come in “diet” packaging in addition to a different zero sugar version.)

The reason for the overhaul: The word “diet” has fallen out of fashion — especially for Millennials and Gen Z-ers.

“Younger people just don’t like the word ‘diet,” said Greg Lyons, chief marketing officer at PepsiCo Beverages North America, during the Beverage Digest Future Smarts conference in December. Pepsi rebranded “Pepsi Max” as “Pepsi Zero Sugar” in 2016 and has been investing in its zero-sugar offerings over the past few year.

“No Gen Z wants to be on a diet these days,” he said, adding that the company is “going to continue to innovate and support that business.”

But distaste for the word diet doesn’t signal an aversion to no-calorie beverages. The diet soda segment, which includes diet and zero-calorie branded drinks, has ballooned since it first hit the mainstream in the 1960s. In 2020, the US retail diet carbonated soft drink market hit $11.2 billion, according to Mintel, a market research company.

The segment is still far smaller than the market for regular carbonated soft drinks, which was $28.2 billion in 2020, but it’s growing much more quickly. Diet soda sales are up about 19.5% from 2018, compared to just 8.4% for regular soda in the same period, making it an attractive segment for soda makers seeking growth.

Evolving attitudes toward dieting as a concept mean soda makers have to de-emphasize diet branding as they steam ahead with zero-sugar offerings — even when, as in the case of those brands owned by Keurig Dr Pepper, they’re selling the same exact drink.

The tactic could help soda makers bring more consumers, especially younger ones, into the fold. The industry needs those customers if it wants to grow the soda market.

The birth of diet colas

Diet Rite, a no-calorie drink from the soda maker Royal Crown Cola, was launched in 1958 “as an option for diabetics and other consumers who needed to limit their sugar intake,” wrote Emily Contois, author of “Diners, Dudes, and Diets: How Gender and Power Collide in Food Media and Culture,” in a 2020 piece for Jezebel.

“It was first stocked among medicines rather than soft drinks, but focus soon shifted to the growing number of weight loss dieters nationwide,” she wrote. Diet Rite was a hit, prompting Coca-Cola to introduce Tab in 1963, and Pepsi to start selling Diet Pepsi a year later.

The segment gained steam in the following years. Looking to expand beyond Tab, Coca-Cola launched Diet Coke in 1982.

At the time, Coca-Cola was facing many of the same challenges it is fighting today: It needed to reinvigorate the Coca-Cola brand, and thought adding a Coke-branded diet option could help.

A company blog post detailing the launch of Diet Coke noted that “colas accounted for 60% of all soft drink sales in the US back then, but diets were growing three times faster than the rest of the category. Diet Coke was seen as the right product for the right time.”

The company grappled with what to name the product. It considered using the moniker “sugar free” instead of diet, but “many saw it as a slur on Coca-Cola’s main ingredient,” according to the post. Ultimately, the company went with “diet” because it “was the most straightforward articulation of the promise of the brand.”

But a few decades later, Coca-Cola returned to the idea of a sugar-free-branded product. This time, it wanted to attract the demographics that seemed to be avoiding the company’s diet beverages: younger consumers and men.

In 2005, Coca-Cola introduced Coke Zero in the United States. The Baltimore Sun explained at the time that Zero’s “marketing is geared to a demographic, such as young people and the most macho of men, who see a stigma attached to the word diet.”

Eliminating the word “diet” creates a “gender-free way to talk about the same topic,” said Jim Watson, senior beverage analyst at Rabobank, who told CNN Business that “diet definitely got taken over as something for women.”

But the arrival of zero-sugar drinks wasn’t just about gender: It marked a turning point for the overall popularity of diet drinks. Alex Beckett, global food and drink analyst at Mintel, said the word diet “started falling out of fashion … with the rise of zero.”

Billing a drink as free of calories and sugar is also about addressing changing ideas about health, and highlighting the absence of sugar from the drink as a positive attribute in itself.

“While the diet designation may be associated with strict regimes or deprivation, the ‘zero’ designation has fewer negative connotations, corresponding with simply a cleaner profile,” according to a Mintel report from April.

For Keurig, the shift seems to be working. Recent zero sugar launches alone were responsible for one percentage point of market-share gains for the company, according to Derek Hopkins, president of cold beverages at Keurig Dr Pepper, who detailed the company’s finances during the company’s investor day in October.

Coca-Cola has also seen success with its Zero offering, which was rebranded to Coca-Cola Zero Sugar in 2017 and got another update this year. “Coca-Cola Zero Sugar’s new recipe has rolled out in more than 50 countries and has had accelerated growth in the last three months,” said Coke CEO James Quincey during an analyst call in October.

The new recipe arrived on shelves in the US this summer, and since then “we have seen that 23% of current Coke Zero Sugar consumers are new,” said Alex Ebanks, a spokesperson for the company, adding that Coca-Cola will continue to invest in the product next year and beyond.

While big brands sharpen their focus on their zero-sugar offerings, they face competition from other categories and upstarts with novel ideas.

One major competitor, according to Mintel’s Beckett, is sparkling water.

“Many people are shifting over … from carbonated soft drinks to sparkling waters,” he said, because those drinks often have no sweeteners, no calories, and “have a more of a health healthy image.”

PepsiCo and Coca-Cola have offered their own sparkling waters to get in on the trend. Coca-Cola owns Topo Chico and has a line of caffeinated sparkling water called Aha, while PepsiCo sells Bubly.

Beyond sparkling waters, competitors are entering the space with fresh spins on sodas. For example: Sodas that promote gut health.

Olipop, a startup that says it makes “a new kind of soda,” sells throwback flavors like classic root beer, vintage cola and others. The sodas, which range from about 35-50 calories each, are made with a mix of ingredients like Jerusalem artichoke and Cassava root that the company says support digestive health. Poppi, which also sells traditional soda flavors in addition to fruit flavors, makes a similar claim, emblazoning a “for a healthy gut” label on the front of its brightly colored cans.

“​​Consumers are voting with our wallets, and sugar is something that people definitely want less of in our lives,” said Danny Stepper, CEO of LA Libations, a beverage company incubator. “That opens the door for a lot of opportunities and categories,” he said. “Consumers want new things, so that’s opening the door to new ideas.” 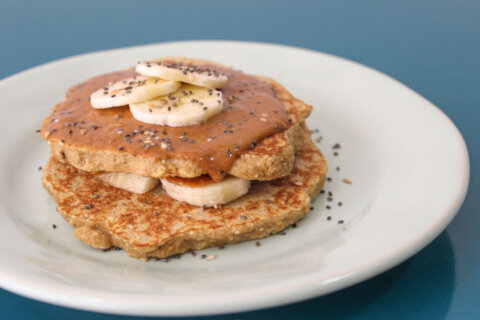 8 high-protein breakfasts that keep you full