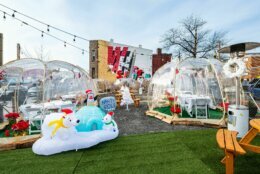 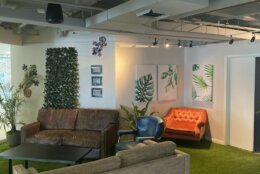 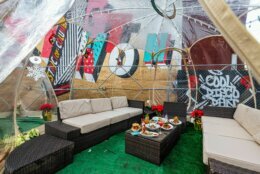 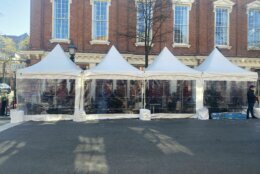 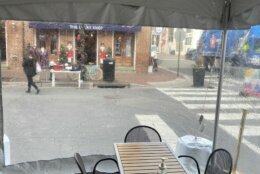 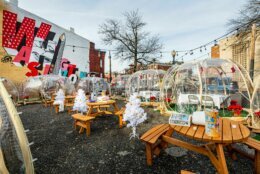 As coronavirus cases climb, the sight of packed restaurants has become a distant memory. In some cases, it’s because customers are leery of eating indoors, and in others, it’s because indoor dining is barred entirely.

But the restaurant industry continues trying to adapt and come up with creative ways to keep customers safe.

In Virginia, where indoor dining is still allowed right now, a pair of restaurants that are in the Alexandria Restaurant Partners have outfitted their dining areas with special ultraviolet lighting. It’s similar to what hospitals do to sanitize surgical rooms, though the intensity of the lights aren’t nearly as strong. There’s no chance of scoring a tan from them.

“This new wavelength is 222 NM,” explained Fred Maxik, the chief scientific officer at Healthe Inc., a Florida-based company that designed the lights now in place at Mia’s Italian Kitchen and Vola’s Dockside Grill in Alexandria.

As a comparison, hospitals blast rooms with a frequency of UVC light measured at 254 NM. Most sunburns are caused from overexposure to UVB light.

Scott Shaw, the president of the Alexandria Restaurant Partners, admits he’s not a science guy. Getting into why it works might be too complicated, but he knows it does while still fitting in with his restaurant’s décor.

“You notice a really beautiful intense, white spot light right over the table which could look like a nice Italian light fixture,” said Shaw. “Behind the scenes it’s sending out its UV rays to keep the air clean. You don’t notice anything.”

Patrons won’t feel it there, either, as any pathogens floating in the droplets coming out of their mouth are neutralized as soon as they hit the light.

In fact, Maxik said he expects to see more of these put in use, in people’s homes and especially in businesses.

“This is going to become ubiquitous,” said Maxik. “If I have a gathering space where people come in …” like restaurant or office space, “that’s really the prime use for it.”

“They can’t penetrate our skin and therefore they can’t harm us,” he said.

At a restaurant in the Shaw neighborhood, they’re opting for privacy instead.

With no indoor dining allowed at all right now, HalfSmoke has set up what it calls “igloos” across the street from its restaurant at the corner of 7th and Florida Avenue Northwest.

The igloos are actually private tents set up in a parking lot that can seat up to six people.

He’s also put in some board games and Bluetooth speakers so customers can play their own mood music. The design is borrowed from other setups in cities with colder winter climates, while acknowledging that one giant tent wasn’t going to make every customer feel safe.

The igloos offer customers the ability to go through most of their meal without any physical contact with the wait staff, which can communicate through the tent even with the doors and windows closed.

Reservations must be made ahead of time to dine in at what McCain calls the “Winter Wonderland.”