With a kick of heat and a distinct Chesapeake flavor, Old Bay is expanding past it's original recipe and into the hot sauce market.
Listen now to WTOP News WTOP.com | Alexa | Google Home | WTOP App | 103.5 FM

With a kick of heat and a distinct Chesapeake flavor, Old Bay is expanding past its original recipe and into the hot sauce market.

Old Bay — the Maryland-favorite seasoning mix that has been around for more than 75 years — is introducing hot sauce to their lineup, according to its parent company McCormick & Co.

“Our fans are always super excited to share with us all the ways they’re using the seasoning and celebrating their love of Old Bay,” said Jill Pratt, vice president of Marketing for McCormick & Co.

“From costumes and themed weddings, to home décor and even tattoos. We can’t wait to hear what they think of our new hot sauce.”

The sauce was made available Wednesday on Old Bay’s website at $3.49 a bottle, and will be coming in the next month to several retail stores in the area. Multiple restaurants in the local area will be offering the hot sauce for tasting as well.

By Wednesday afternoon, Old Bay’s Twitter account announced that the hot sauce had sold out on its website, which temporarily crashed after eager buyers flooded the site. Around 2:45 p.m., it said that “more will be coming soon.”

PSA For the 1K+ of you still on our website: #oldbayhotsauce will not be restocked today, but more will be coming soon! We got you guys. Seriously, it’s coming.😋

Your ❤️ for all things OLD BAY may have broken the Internet. 🔥 Thanks for always being ready to try something new. SOLD OUT, but RESTOCKING. Please stay tuned!

The front label of the hot sauce reads: “For Game Day, Brunch & Happy Hour.” The company recommends you pair the sauce with chili, nachos, wings and cocktails, among other iterations.

Customers who snagged some of the precious sauce began reselling it online almost immediately, charging anywhere between $50 to $200, The Virginian-Pilot reported.

$200 for a jug of @OLDBAYSeasoning hot sauce!? Oh y’all are crazy. @nbcwashington pic.twitter.com/vMptbBYqfk

The appropriately-priced hot sauce will be restocked soon online, and will be on sale over the next month at stores such as Acme, Giant, Food Lion, Martin’s, Safeway, Wegmans and Weis, for a limited time, the company said.

Old Bay was originally created in Baltimore as a seasoning mix and has since expanded to include items such as seasoned beers and chips.

Brett Snyder is a social media and digital engagement specialist with a background in digital marketing and communications. Before joining WTOP, he worked with Hometown Podcasts and JLS Digital Marketing, with a focus on building and expanding social media pages. 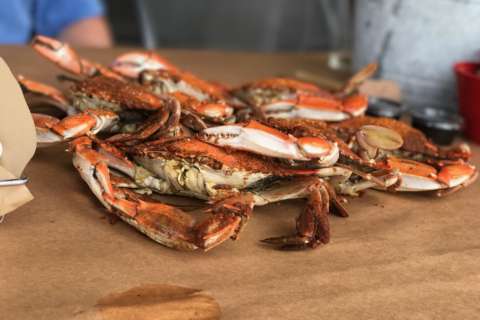 Cracking a conundrum: How to eat a Maryland crab 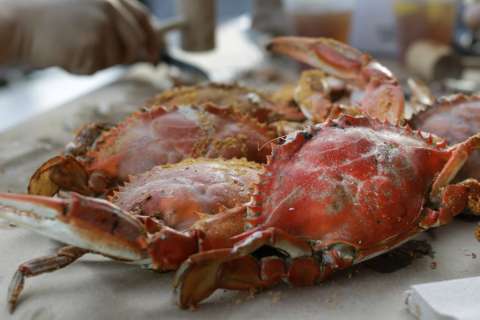 Steamin’ summer: Where to find local crabs in the DC area