Home » Food & Restaurant News » How science made a…

Meet the latest generation of plant-based meat substitutes. They're getting good reviews from the few who've tried them, but to taste so good no doubt raises a question among both the carnivorous and vegan: What's the mystery behind these mystery meats?
Listen now to WTOP News WTOP.com | Alexa | Google Home | WTOP App | 103.5 FM

Veggie burgers that taste more like burgers and less like boring ol’ veggies? Is that even possible?

Meet the latest generation of plant-based meat substitutes. They’re getting good reviews from the few who’ve tried them, but to taste so good no doubt raises a question among both the carnivorous and vegan: What’s the mystery behind these mystery meats?

As with any good recipe, it’s about making the most of the right ingredients.

“They’ve used substances that mimic the flavor that you get in a regular hamburger,” said Sally Squires, who writes for the Lean Plate Club™ blog.

An Impossible Burger, for example, uses a soy plant protein that contains heme, a substance similar to what is found in animal blood. Another brand, Beyond Meat, makes their products from pea protein.

Squires has yet to try an Impossible Burger — they’re not yet widely available — but she said the easier-to-find Beyond Meat version was “very good.”

“It’s very similar to meat,” she explained to WTOP’s Mark Lewis and Debra Feinstein. “… And the nice thing about these new plant-based meats is that no animal had to die.”

They’re also a more sustainable option for that cookout, she said, and they compare well nutritionally with the kind of patties that come from a stockyard. To wit:

This latest generation is not as ubiquitous as more-established veggie patties, but that is changing.

Beyond Meat is available at various restaurant and grocery chains. Impossible Burgers can be found at thousands of restaurants, including several in the D.C. area, and will be available in supermarkets later this year.

So, as science lends better flavor to that humble veggie patty, even omnivores are taking notice, Squires said: “We’re seeing them move from kind of a niche product for vegetarians and vegans into mainstream for all Americans.” 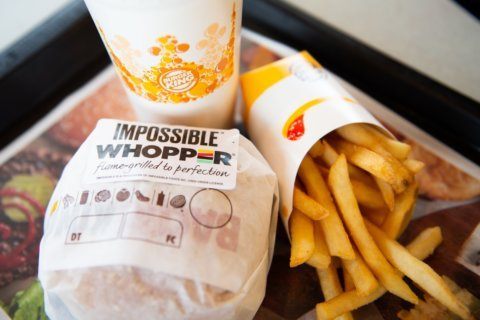 Burger King plans to roll out Impossible Whopper across the US