Student-grown salad in the school cafeteria? These kids dig it

School gardens are no longer a rarity. But at one local elementary school, students are taking gardening lessons beyond the dirt and into the lunchroom.
Listen now to WTOP News WTOP.com | Alexa | Google Home | WTOP App | 103.5 FM
download audio
'You're laying the foundation for global stewards' (WTOP's Rachel Nania)

WASHINGTON — School gardens are no longer a rarity.

These days, it’s common to spot pepper plants and tomato towers in schoolyards throughout the country, as more educators turn to dirt to teach lessons on healthy eating and the root of the food system.

But at Horace Mann Elementary School in Northwest D.C., instruction isn’t confined to a few cedar-raised beds. After leafy vegetables are planted and cared for, students harvest the crops, chop them up and serve them to more than 400 of their peers for lunch. 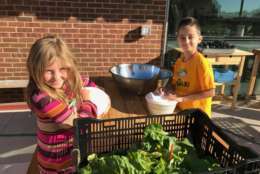 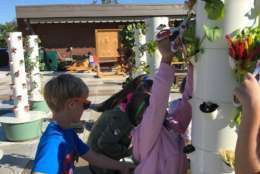 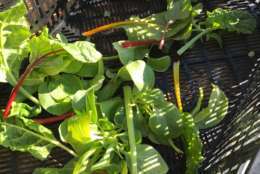 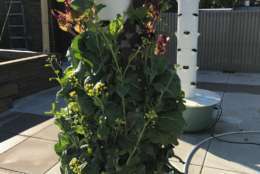 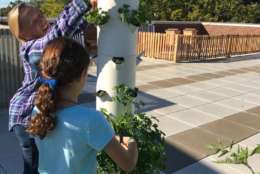 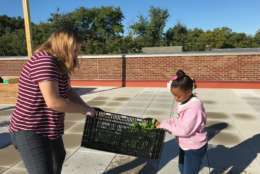 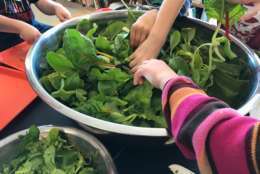 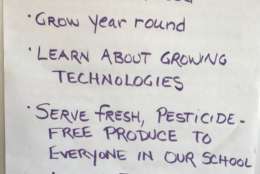 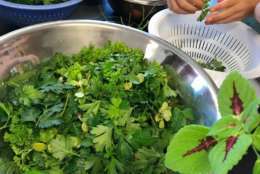 “It’s really fun having a conversation with them about whether they prefer the Swiss chard last week to the pak choi this week,” said Amy Jagodnik, who has been the school’s garden coordinator since 2004.

Jagodnik’s third-floor classroom, which is filled with seedlings and outfitted with a small kitchen, opens directly to the school’s rooftop garden. It’s there where a class of third-graders pick parsley and pak choi from commercial-grade garden towers on Monday mornings.

Architect Michael Marshall designed the rooftop farm, one of several gardens at Horace Mann, during the school’s renovation three years ago.

“The connection to the exterior is not an accident in this design. A lot of these young kids, when they grow up, rooftop gardens are going to be very common as far as sustainability and urban living. Why not prepare them?” Marshall said.

Once the greens are gathered and washed, they’re hand-chopped and thrown into large stainless steel bowls, where they’re tossed in a simple dressing of olive oil, apple cider vinegar, salt and sugar.

At lunch, Jagodnik and a few helpers walk around the cafeteria and serve the salad du jour.

It’s not uncommon to be met with resistance and a few creative excuses — Jagodnik has even heard students say they “already had something green for breakfast.” So she considers the program a success when the kids agree to try just one leaf.

“You’re laying the foundation for global stewards,” Jagodnik said about the school’s investment in its gardening program.

“You want children to care about their environment. You want them to know how to eat healthy, where their food comes from and how to support that, even if they don’t become scientists or become environmentalists, they still have that foundation.”

Give your kale the spa treatment 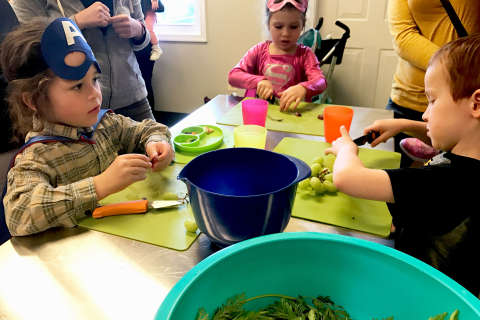