Move over Bourdain and Batali, meet the next food TV host

One of the year’s most inspiring cookbooks isn’t authored by a celebrity chef. It's from a 15-year-old teen with autism. Here's his story.
Listen now to WTOP News WTOP.com | Alexa | Google Home | WTOP App | 103.5 FM

WASHINGTON — One of the year’s most inspiring cookbooks isn’t authored by a celebrity chef, and its pages are not filled with complicated techniques alongside pictures of perfectly styled food.

It’s from Chase Bailey, a 15-year-old Californian who, for the last two years, has been rewriting the rules on what it means to be a food celebrity. As it turns out, you don’t need to win a cooking challenge or have a bank of Michelin stars. All you need is determination.

Chase was diagnosed with autism when he was 2 years old. His mom, Mary Bailey, says one of the earliest signs of the disorder was Chase’s extreme aversions to food.

“We got into therapy right away, but one of the areas the therapist really struggled with was getting him to eat. We tried a ton of different therapies and it didn’t work,” said Mary, adding that there were only a few foods Chase could stomach.

But when Chase was 8, curiosity triumphed over his taste buds. One day while watching TV, Chase landed on the Cooking Channel, and he instantly became hooked.

“He had shows filling up the DVR and was watching them over and over again,” Mary said.

Mary got him to try something a little less exotic: hamburger — “And normal things kids would eat,” she said.

Pretty soon, food became Chase’s passion. Mary says it’s all he would talk about, from morning to night. And he wanted to take that passion beyond the plate and launch a cooking show and food blog.

“I didn’t take it too seriously in the beginning because I thought, well, he’s so young and kids tend to change their minds a lot,” Mary said. “But he was talking about it with his teachers, he would talk about it with his aid at school; the projects he was doing at school were related to food. I finally just said, ‘I’ve got to make this happen for him.’”

Mary borrowed a friend’s kitchen and filmed the very first episode of “Chase ‘N Yur Face,” on which her son made a Mexi-burger, complete with taco seasoning, pico de gallo and guacamole.

“I went to the grocery store, got the stuff for his recipe and then started filming with my camera, and we did that for six or seven episodes,” Mary said.

Chase’s online audience grew, and people who saw his show began volunteering their services — from filming to coaching and more. Working on the show became an everyday project for the Bailey family — cooking was even incorporated into Chase’s educational curriculum.

The turning point, Mary says, is when Roy Choi, a chef who became famous for his Los Angeles Korean taco truck, accepted an invitation from Chase to cook on his show.

“It really gave him a huge outlet for his creativity because the earlier shows start off with him just in front of the camera, getting used to it, and then he started adding some comedy to it and he would dance in them. It was just a way for him to be creative and have fun,” Mary said.

This fall, Chase published his first cookbook — “The Official Chase ‘N Yur Face Cookbook” — which is a collection of the recipes he’s kept in his journal over the years. It’s filled with stories and step-by-step instructions for dishes such as “Sloppy Chase,” made with lamb instead of ground beef, and tikka masala pizza.

Mary says the main takeaway from her son’s cookbook is that it’s accessible and inclusive, since many recipes can be adjusted to be gluten-free and vegan.

“It’s really going to create an opportunity for people to find success in the kitchen,” she said.

Chase’s cookbook may be complete, but that doesn’t mean the teen is taking a break. Mary says her son’s goals include going to college, studying film and eventually having his own television show. 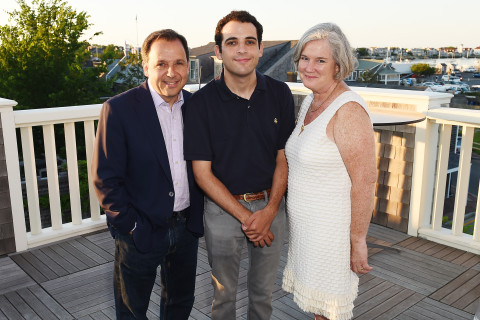