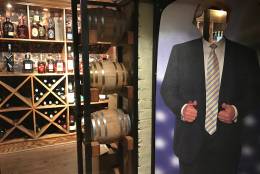 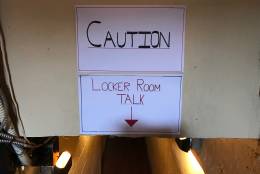 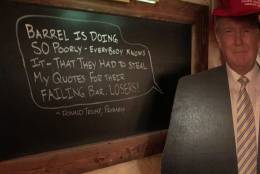 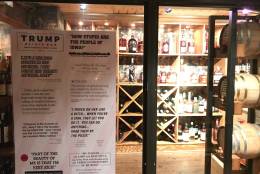 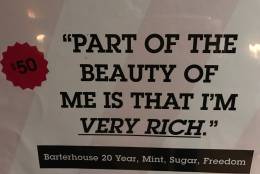 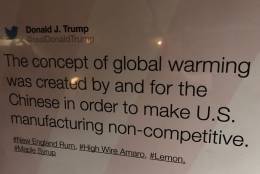 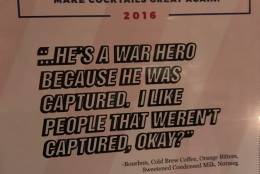 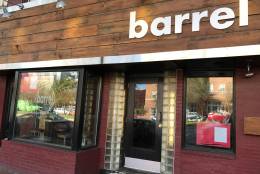 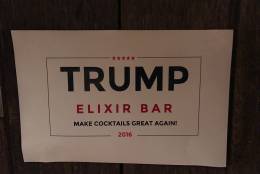 WASHINGTON — Several bars in the nation’s capital are pouring election-inspired cocktails leading up to Nov. 8, but one Capitol Hill watering hole is taking its political party a step further.

Barrel, a whiskey-fueled restaurant on Pennsylvania Avenue, transformed its basement lounge into a Trump-themed tavern.

The Trump Elixir Bar, as it’s called, is decked out with patriotic bunting, American flags and life-size cardboard cutouts of the candidate. The oversized menus, designed to make patrons’ hands look small, lists cocktails named after some of Trump’s more famous quotes.

The “Part of the beauty of me is that I’m very rich” is made from Barterhouse 20 Year Old, mint, sugar and “freedom,” and it rings in at $50. There’s also a cocktail called “He’s a war hero because he was captured. I like people that weren’t captured, okay?” which is made using bourbon, cold brew coffee, orange bitters, sweetened condensed milk and nutmeg.

Mike Haigis, Barrel’s general manager, says the pop-up bar is satire, not support for the presidential candidate, a point he had to clarify in a recent Washington City Paper article.

“We just kind of thought … we could bring humor to a situation that didn’t really have any,” Haigis said.

“There are a million think pieces that have been written by a million talented people online, and they’re very necessary and the dialogue is great, but we’re a bar. We wanted to add to the conversation, and this is the way we figured we could do it.”

The only sign advertising the Trump Elixir Bar is a sheet of paper inside Barrel that reads “Locker Room Talk” and has an arrow directing customers to the space. The hallway leading to the main room is decorated with “bad hombres” and “nasty women.” Pictures of people and places Donald Trump has insulted are plastered on another wall.

Giving its basement bar a theme is not new for Barell. Last year, the lower level bar had a new theme every week for 12 months straight. Haigis said the Trump theme will stay through the end of the election, and plans for an election night watch party are in the works.

If you can’t make it over to Capitol Hill to partake in the parody, Washingtonian reports that another Trump-themed pop-up bar is coming to the former Libertine space in Adams Morgan Nov. 2-8 — this one’s focus is on mezcal.

And of course, if you’d prefer to take jabs at the other candidate through drinks, head on over to Bastille where you can sip on The Crooked, or try out Lincoln, which is mixing a cocktail called Hillary’s Inbox.

The Trump Elixir Bar at Barrel, 613 Pennsylvania Ave. SE, is open at 6 p.m., Tuesday through Saturday.