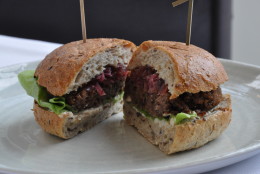 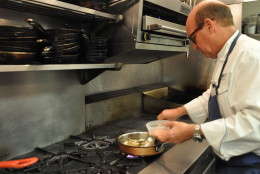 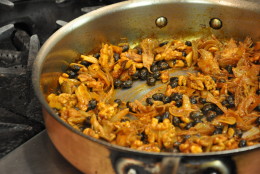 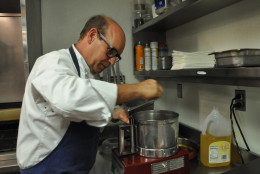 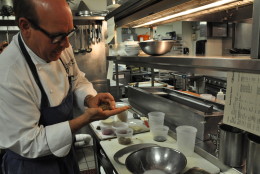 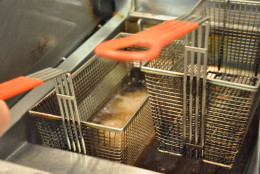 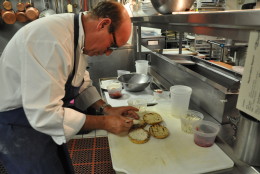 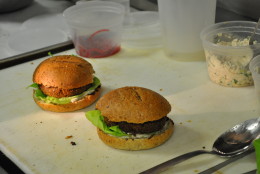 WASHINGTON — For the past two weeks, Chef Todd Gray has been obsessed with veggie burgers.

He’s spent hours researching ingredients, testing techniques, brainstorming with staff and tasting recipes — all in an effort to create the perfect patty.

And on Tuesday, he accomplished that. “We hit it; we finally hit it. We hit it at about noon today, actually,” says Gray, who runs the downtown fine-dining establishment Equinox with his wife, Ellen.

Gray did not embark on his quest to perfect the veggie burger to satisfy a craving, nor was his motive to expand Equinox’s menu. His main goal was to make a vegan burger that rivals one of Spike Mendelsohn’s famous burgers. And that’s just the start of the challenge.

Along with Mendelsohn, Gray has lured other well-known chefs into what he’s calling a Vegan Smackdown Challenge. Over the next few months, he’ll take on dishes — such as José Andrés chicken paella, Jamie Leeds’ oyster gratin and Cat Cora’s artichoke and tomato frittata — and give them a vegan makeover.

“People always feel like you’re not going to get the same flavor and drive in a [vegan] dish,” Gray says. He’s out to prove them wrong.

Cooking vegan is not new to Gray; he does it regularly. Equinox, which he and Ellen opened 16 years ago, offers a vegan tasting menu and a vegan Sunday brunch in addition to its more traditional lunch, dinner and tasting menus.

“Cashew cream has become as big on the line as regular heavy cream,” Todd says.

The restaurant’s foray into vegan cooking started in 2004, when Todd and Ellen made the daring decision to offer an all-vegan menu during Restaurant Week —- a decision that turned out to be a tremendous success.

Then, when the Grays took over the café at the Corcoran about four years ago, they experimented with a monthly vegan brunch. Eventually, the vegan brunch became a permanent Sunday fixture.

When the Corcoran closed last summer, the Grays moved the popular brunch to Equinox.

“We had to take vegan brunch somewhere because there were so many awesome customers,” Ellen says. “They’re the most wonderful restaurant clientele. I get out of bed at 8 a.m. on a Sunday morning happily to come down [to the restaurant].”

Over the last few years, Ellen says she’s seen the popularity of vegan dining increase 250 percent at Equinox. On any given night, the Connecticut Avenue establishment is packed with vegans and non-vegans alike. Todd says plenty of customers who order off the vegan menu at Equinox are not vegans; they’re “vegan-curious.”

In fact, Todd and Ellen aren’t full-fledged vegans. Ellen, who says she keeps vegan about 80 percent of the time, admits to liking cream in her coffee. Todd eats vegan a few days a week.

“It’s amazing; your body feels so much better. And it’s not like you have to be one extreme or another,” he says.

The idea for the Vegan Smackdown Challenge stemmed from Equinox’s vegan customers. Ellen says she wanted to make some of the city’s most beloved “mainstream” dishes available to them.

“Vegans can love those chefs too, or their signature dishes, too,” she says. “It’s like the playground rules: Include everybody.”

For Todd, coming up with ways to transform the chefs’ classic dishes into vegan meals is a challenge that keeps excitement alive in his kitchen.

The first dish in Todd’s challenge is called the FLOTUS burger, since its non-vegan counterpart is Mendelsohn’s Prez Obama burger, made with applewood bacon, onion marmalade, Roquefort cheese and a horseradish mayo sauce.

In recreating the burger, the biggest obstacle for Todd was forming the patty itself. He says lots of store-bought veggie burgers contain preservatives and gums to bind the patty together. He decided to take “more of a fresh approach. …

“I’m sure some people make veggie burgers a lot quicker, but we wanted to do it the right way. I want to give Spike’s burger justice; I want to do a burger that shows some technique,” he says.

Todd’s patty is made of sautéed onion, garlic, smoked walnuts, oyster mushrooms and a spice blend of paprika, onion powder, garlic powder, cumin and salt and pepper. The ingredients — which, when cooked, ironically enough have a burgundy color similar to ground beef — go into a food processor with a little bit of cooked basmati rice. The mixture is not pulverized — just pulsed.

“We want it to have some consistency and bite, like you would find in a beef patty,” Todd says.

After a few pulses, cooked quinoa is added, followed by Worcestershire sauce, panko, egg replacer and a sprinkle of all-purpose flour. Todd forms the combined ingredients into patties, then dredges them in flour, egg replacer and panko and deep fries them until golden brown.

“I think [anyone] might be able to try to make this veggie burger when you see it,” Todd says.

The FLOTUS burger will appear on Equinox’s lunch menu beginning Monday, April 6, and will remain on the menu until next month when the chef abandons the burger and moves on to his next challenge: Hank’s Oyster Bar’s oyster gratin. The new challenge will be a welcome change of pace for the chef who’s been spending every spare minute thinking inside the bun.

“I’m veggie-burgered out,” he says.

You can make Gray’s FLOTUS burger at home with his recipe below.

Add walnuts, beans and rice, cook two more minutes. Transfer mixture to a food processor and pulse to a “meat like” consistency. Transfer to a bowl and fold in quinoa, panko crumbs and agar slurry (mix agar powder with water to make a milky-like slurry). Add soy, Worcestershire, flour and salt and pepper. Form into patties.

Place patties in flour, then slurry and then into panko crumbs. Freeze patties. Deep fry at 325 degrees for four minutes or until golden brown. 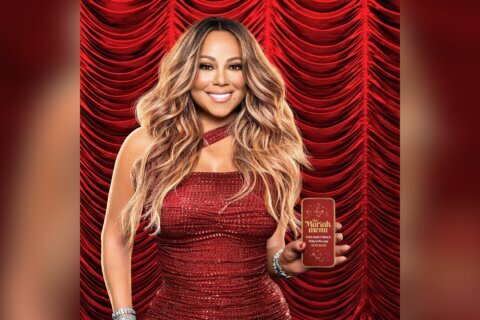 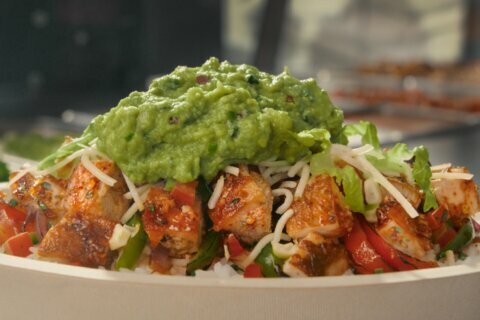