A versatile pocket food: Empanadas get attention during April (Recipes)

April 8 is National Empanada Day. Plan ahead for celebrations by mastering empanada recipes and brushing up on the cultural significance of the traditional food.
Listen now to WTOP News WTOP.com | Alexa | Google Home | WTOP App | 103.5 FM

WASHINGTON — If you love chocolate, chances are you’re a fan of October’s National Chocolate Day. And those crazy about caramel likely look forward to April 5, otherwise known as National Caramel Day.

Empanada enthusiasts, April 8 is your turn to celebrate.

Every day, it seems, a different food is recognized — from lima beans to pancakes to escargot — and it’s all thanks to a robust registry of national food holidays.

Some of these food holidays are legitimate — meaning a proclamation was issued by the President of the United States. (You can thank President Reagan for National Ice Cream Day and President Clinton for American Wine Appreciation Week.) Others, however, are simply invented by individuals and food interest groups.

But one thing’s for sure: When empanadas are on the calendar, it hardly matters whether the observance is official — at least, that’s Matt Zagorski’s mentality.

Zagorski is the executive chef at Cuba Libre, in D.C.’s Penn Quarter neighborhood. Every day, his kitchen serves between 200 and 400 empanadas. But when $1 empanadas are on the menu for National Empanada Day, they get closer to 900.

Empanadas are a popular pocket food traditional to Latin American and Spanish cultures. The name comes from the Spanish word empanar, which means “to bread,” and the options for filling the pasty-like dough are endless.

During April, Zagorski also offers a goat cheese and sour-cherry dessert empanada, and a black corn-shell lobster empanada. “It’s endless — endless with what you can put in it and endless different kinds of dough.”

Empanadas also vary in their folds, a characteristic that’s unique to each family. At Cuba Libre, the empanadas are named after the mother of the restaurant’s concept chef, Guillermo Pernot; they’re called Mamá Amelia’s empanadas. Zagorski explains that learning the different empanada folds was an important part of Pernot’s childhood.

“First he would just make the cheese fold, then there would be a regular fold, and as he got older, his mom would ask him to make more complicated stuff. So you sort of graduate up as you go in your family,” Zagorski says.

“Because they’re made by mom or grandma, the folds are traditional per family. … So basically, it’s instilling and learning your heritage as you’re growing up … [you learn] how this stuff was done before, because I’m pretty sure your great-grandmother did it the same way your grandmother’s showing you.”

One of the best things about empanadas, Zagorski says, is that they are relatively easy to make at home, and are especially good for grab-and-go lunches and snacks. (He shares his favorite recipes and a video demonstration below.)

Of course, if you’d rather have a chef guide you the first time around, Zagorski will lead an empanada cooking class at Cuba Libre on April 15 from 6:30 to 8:30 p.m. Tickets to class, which include cocktails, tapas and empanadas, are $65.

Partially freeze the chicken.  Dice partially frozen chicken very finely, or grind to medium if possible. (You can also purchase ground chicken.) Strip corn kernels from the ear of corn.  In a sauté pan, heat oil and sauté onions until softened, but do not pick up any color.  Add the ground chicken, oregano and crushed red pepper.  Cook chicken about halfway and then add corn and salt.  Finish cooking, adjust seasoning and cool the mixture.  Once cool, add cheese before assembling empanadas.

Make an egg wash from the eggs and water; whisk well to combine.  Fill each empanada disc with 1.75 ounces of filling.  Brush the edges of the disc with egg wash and close.  Press and crimp edge to seal.  Prepare a cookie sheet or baking dish by lining with parchment paper and spraying with nonstick spray.  Place empanadas on the sheet and bake at 400°F for eight minutes.  After eight minutes, remove from the oven and brush tops with a thin layer of egg wash.  Return to the oven and bake until golden brown, about three to five minutes.

In a heavy pan, sweat onions very slowly with butter and salt.  Allow to cook until very soft and just beginning to turn brown.  You do not want any color.  Once the onions are very soft, remove from the heat, add vinegar and allow the entire mixture to cool.

Toss the cooled onions with the three cheeses, nutmeg and salt.  Portion into 1½-ounce balls. Place the ball of filling  in the center of the empanada disc, fold in half and crimp edges with a fork.  Combine eggs and water and brush empanada disc with egg wash. Cook the empanadas, either by baking or frying.

Heat the oil in a large rondeau on medium-high heat and sauté the ground beef and bay leaf in the olive oil. When browned, remove meat and drain off some of the fat, leaving enough fat to cook the peppers (see the next step). Sauté the red peppers, green peppers, garlic and onions in remaining fat. Add Recaito, raisins, cumin, paprika and oregano. Cook for a while longer. Return the meat to the rondeau and stir well; add red wine, tomato purée, and season to taste with salt and pepper. Add two diced Manzanilla olives per empanada. Add tomato paste and stir well; simmer for 20 minutes. Transfer to sheet pans and cool quickly. Once cooled, place meat in center of empanada discs and fold disc in half, pinching edges. Combine eggs and water to form an egg wash, and brush the wash on the empanadas. Cook by baking or frying. 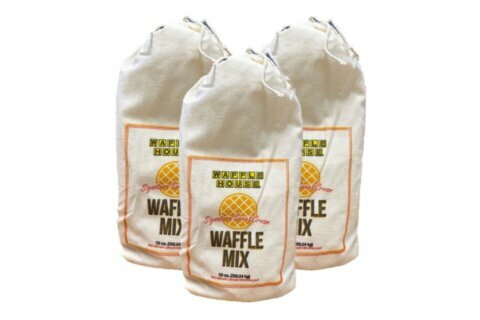