According to Fairfax County Police, officers had been directed to do a wellness check at the apartment in the 4200 block of Mazarin Place by a family member of one of the deceased.

When officers arrived at around 10:30 a.m., they found the door to the rear bedroom had been barricaded shut. Police called the Fairfax Fire Department, and firefighters put up a ladder to the bedroom on the second floor apartment, allowing police to look inside. Upon looking into the bedroom window, police said they saw the three bodies.

After forcing entry into the bedroom, police say they found two women and one man in the rear bedroom, dead from apparent gunshot wounds.

Fairfax County Executive Deputy Police Chief Brian Reilly said in a news conference that the three individuals, believed to be in their 20s, were the only people in the bedroom at the time of the shooting. Police do not, at this time, know the exact relationship between the deceased individuals.

Responding police officers were let into the apartment in the Camden Fair Lakes development by a roommate of one of the deceased women. Reilly said the roommate was not a person of interest in the investigation and had been unaware of the death scene in the apartment.

Detectives from our Major Crimes Bureau are on the scene of a death investigation in the 4200 block of Mazarin Place in Fairfax. Three individuals were found inside an apartment following a welfare check and pronounced deceased on the scene. PIO at the location.#FCPD pic.twitter.com/uAW4RDddFo

While investigators are working to determine exactly what happened and when, Reilly said that a murder-suicide has not been ruled out.

Fairfax County police deployed its mobile crime lab for a forensic analysis of the scene. Reilly also said that investigators had been knocking on doors in the apartment complex to question neighbors about anything they may have heard or saw.

Below is a map of where the incident took place: 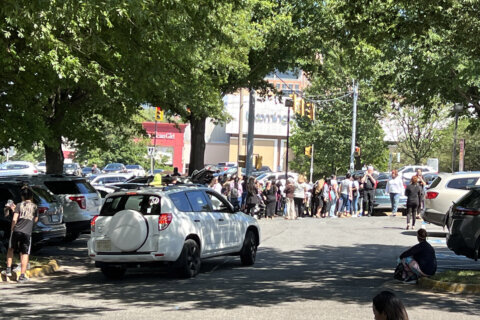