Adrian Guziewski's Saturday shift started like any other, but less than an hour into his 12-hour patrol, he suddenly became the only thing standing between a despondent woman and a life-ending fall.
Listen now to WTOP News WTOP.com | Alexa | Google Home | WTOP App | 103.5 FM

Adrian Guziewski’s Saturday shift started like any other. But less than an hour into his 12-hour patrol, Guziewski suddenly became the only thing standing between a despondent woman and a life-ending fall through the Capital Beltway’s Springfield interchange.

Shortly before 2 p.m., Virginia State Police and the Virginia Department of Transportation received a call for pedestrians walking on the Beltway near Interstate 395. Guziewski, a safety service patrol operator, was the closest employee to the incident.

From Van Dorn Street, Guziewski made his first pass through Springfield on the Inner Loop, finding nothing. After an about-face at Braddock Road, he turned south on the Outer Loop. It was then that he spotted a trio of people on the right shoulder above the I-395 mainline.

A passerby who had stopped at the scene quickly guided Guziewski toward a woman; her back facing traffic, her hands gripping the concrete wall, her head facing downward toward the roar of the heavy highway traffic below.

“He got out of the car and she was trying to climb up the jersey barrier on the bridge,” said Ellen Kamilakis, spokesperson for VDOT.

Without blinking, the highway help truck driver did more than just help. Guziewski managed to swiftly grab the woman and bring her off the wall. She struggled in his arms, attempting to climb the wall again.

He gently brought her back on the right shoulder again. With one free hand, he keyed his radio, relaying the exact location to the operations center as Virginia State Police raced to the scene.

Troopers arrived within minutes, some positioning below the overpass, ready to stop interstate traffic as a matter of safety. In October 2017, a 12-year-old boy jumped from an overpass above I-66. A driver below, Marisa Harris of Olney, Maryland, was killed. The boy sustained life-threatening injuries.

Fairfax County Fire and Rescue services arrived on scene and conducted a medical evaluation. The woman was transported by ambulance off the highway. According to initial reports, there was no vehicle found near the scene.

One by one, the responders departed. Guziewski resumed the rest of his long shift, with an eye out for debris, disabled vehicles and more routine roadside hazards.

“He’s actually quite humble about it,” Kamilakis said. “To have something like that happen and then to just go about your shift the rest of the day just like you’ve just simply changed a tire is simply amazing.”

To Guziewski, the woman was not a tire. She was a human being. Perhaps it was his prior experience as a police officer in Poland that kicked in. Perhaps it was simply his capacity for good.

Kamilakis said Guziewski was not available for comment on Sunday because he was at work, diligently patrolling the Beltway between Springfield and the Woodrow Wilson Bridge, doing his best to keep the public safe.

The National Suicide Prevention Lifeline provides 24/7, free and confidential support for people in distress. If you or someone you know are in need of help, call 1-800-273-8255. 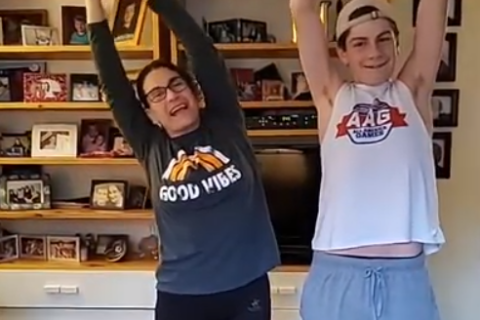