‘The memo came from us’: Mystery in Fairfax Co. Board of Supervisors chairman race revealed

The initially anonymous memo alleging that the front-runner for Fairfax County, Virginia’s top office had ethical issues originated from a challenger’s campaign.

Chapman said his campaign for Fairfax County Board of Supervisors chairman hired a law firm to compile a timeline that claims Lee District Supervisor Jeff McKay improperly got a discount on his house from a friend.

“That was part of our public records research. There’s no secret about it. I mean, these are very troubling allegations,” Chapman said. “Focus on what is important, which is, is it true?”

McKay, who is endorsed by retiring Chairman Sharon Bulova, hired his own lawyer to investigate the claim. He and that report say there was clearly nothing wrong.

“It’s false. It’s sad that the campaign would stoop to that level,” McKay said.

“I’ve got an 11-year track record of enormous success as a supervisor, of ethical leadership. And at the end of this campaign to have somebody put out something completely false and vicious, a personal attack on me — I wasn’t going to stand for it,” he added.

The chairman represents more than 1 million people who live in Fairfax County. The winner of this first Democratic primary for the office in decades is expected to be a heavy favorite this fall.

“It’s an unfortunate distraction in a campaign that is vital to the future of the county, and I think this is the type of vicious political attacks that people have had enough of. It’s very Trump-like in its tack and its angle, and I think Democrats and residents of Fairfax County in particular are fed up with that, and I know it’ll backfire on him,” McKay said.

Chapman called the information in the memo circulated by his campaign “troubling and sad.”

McKay questioned Chapman’s links to Republicans, including a $15,000 donation to Ken Cuccinelli’s campaign.

“That donation was stupid, thoughtless and ill-conceived, and my wife told me not to do it,” said Chapman, who pointed to more recent donations to Democrats, including Tom Perriello.

“If things are going to move forward in this county, we need to push past any establishment purity test,” Chapman said.

At-Large School Board Member Ryan McElveen and activist, professor and lawyer Alicia Plerhoples round out the ballot June 11.

Chapman has loaned his campaign more than $800,000 in this election cycle.

WTOP will have a complete preview of the chairman’s race before Primary Day. 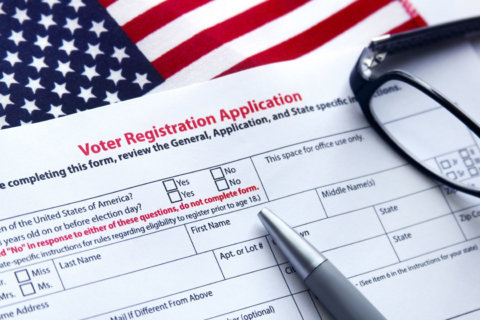