At least 1,000 displaced as Fairfax Co. transformer fire leaves high-rise in the dark

A transformer fire in a Fairfax County, Virginia high-rise condominium on Monday caused extensive damage to the building's electrical system, displacing some 1,000 residents.
(1/4) 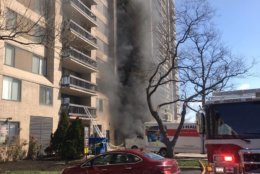 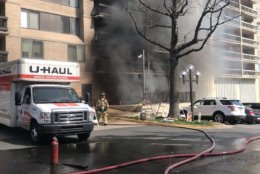 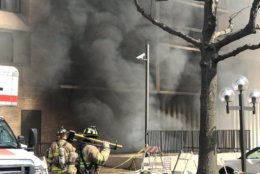 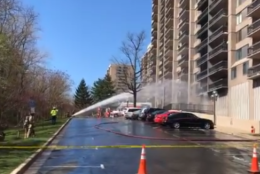 Residents at a Fairfax County, Virginia, high-rise condominium were displaced Monday night after a transformer fire outside the building caused extensive damage to the building’s electrical system.

Fairfax County Fire and Rescue said there were about 1,000 people in the building when the two-alarm blaze began in a transformer vault at about 10 a.m. Monday. outside the 26-story Bailey’s Crossroads complex late Monday morning.

Everyone was evacuated, and residents were encouraged to find housing elsewhere for the night. Individual units were left without power, heat or running water while temperatures were predicted to be near freezing into Tuesday morning.

Investigators have determined that the fire was accidental, the fire department said in a statement Tuesday morning — hot metal ignited some plastic wiring harnesses insulation. There was no structural damage to the building; one person was taken to a hospital for evaluation, and no firefighters were hurt, the department said.

Damage to two transformers totaled about $44,500.

Fire officials allowed residents to retrieve belongings from inside the building. Fairfax County’s emergency management, health department and family services, along with the Red Cross, were on the scene assisting displaced residents.

Video and photos on social media showed thick smoke billowing up the southern-facing half of the building in the 3700 block of South George Mason Drive, near Virginia Route 7, around 10 a.m. Monday.

While fire did not spread to the building itself, smoke migrated into apartment units, the agency said.

The incident was upgraded to two alarms so additional personnel could be brought in to assist with evacuation and smoke removal, including resources from Arlington and Alexandria, Fairfax County fire Asst. Chief Joe Knerr said Monday. 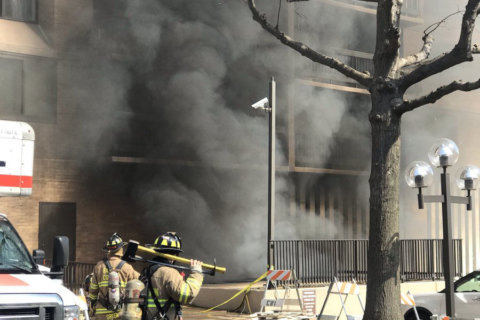