Protesters took to the streets outside the National Rifle Association to demand stricter gun laws near the nation's largest gun lobby. They pushed for increased restrictions on downloadable weapons and called on the Internal Revenue Service to revoke the NRA’s tax-exempt status. See photos.
(1/6) 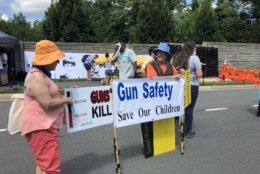 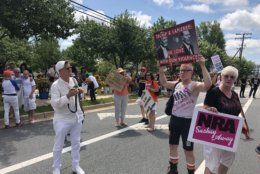 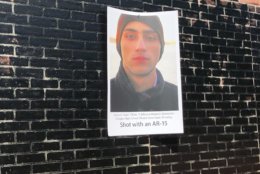 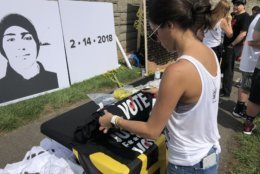 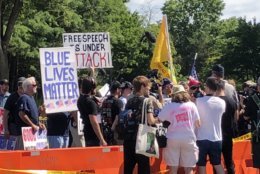 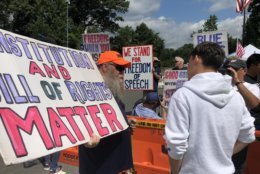 WASHINGTON — Over five months after the Parkland shooting, protesters took to the streets outside the National Rifle Association to demand stricter gun laws near the nation’s largest gun lobby.

In the latest demonstration against gun violence following the deadly Florida shooting, protesters shut down a portion of Waples Mill Road outside the NRA’s Fairfax, Virginia, headquarters on Saturday afternoon.

They were joined by Stoneman Douglas survivors David Hogg and Emma Gonzalez — who, together with other March for Our Lives organizers, are currently on a nationwide “Road for Change” bus tour advocating for gun regulation and registering voters ahead of the November midterm elections.

The students will make another stop in D.C. on Sunday.

Among the demands fielded outside the NRA were comprehensive background checks, a freeze on high-capacity magazines, and an assault weapons ban.

Protesters also pushed for increased restrictions on downloadable weapons — as a national debate builds on whether the public should be able to freely access blueprints for 3D-printed guns. They also called on the Internal Revenue Service to revoke the NRA’s tax-exempt status.

A small group of gun rights advocates watched the rally from over a traffic barrier, standing separate from the main event. They held signs including “liberty is not a loophole,” “Constitution and Bill of Rights matter,” and several others expressing support for law enforcement officers.

“I’m glad they’re here,” said John Cullom, a gun rights advocate on the opposing side. “I hope they can get educated on the Second Amendment and Bill of Rights and why they matter.”

Students walked over to 2nd amendment supporters to start a conversation @WTOP pic.twitter.com/oKH7PR80FI

Apart from protest, the event also intended to memorialize victims of the Stoneman Douglas shooting. Seventeen people were killed on February 14 when a gunman opened fire on students and faculty at the Florida high school, sparking months of nationwide outrage, protests, and walkouts.

Among the victims was Joaquin “Guac” Oliver, who would have turned 18 on Saturday. In remembrance, his father, Manuel, painted a mural depicting Joaquin looking past a candlelight vigil, with the words “we demand to blow out our candles.”

Other movements showing support included the Women’s March, which held a protest that gathered some 5 million people worldwide — more than 500,000 people in D.C. alone — on January 21, 2017, one day after President Donald Trump’s inauguration.

The Women’s March staged a two-day protest in July in response to an NRA advertisement video they said encouraged violence against communities and groups that disagreed with the gun lobby. The protesters walked 18 miles from the NRA headquarters in Fairfax to the Justice Department in D.C.

The Associated Press and WTOP’s Melissa Howell contributed to this report.