WASHINGTON — As John Butler prepares to become the next chief of Fairfax County Fire and Rescue Department, his eyes are wide open about the turmoil the agency has undergone in recent years, yet is confident the department’s best years are in the near future.

In a WTOP interview, Butler — who has risen through the ranks of the Howard County, Maryland, Department of Fire and Rescue Services and was appointed chief in 2014 — said he is dedicated to helping the Fairfax department move past recent complaints that management wasn’t doing enough to fight sexual harassment and discrimination within county firehouses.

On Sept. 1, Butler will take control of the department, replacing Richard Bowers, who retired in April.

“I see a professional organization, a proud organization, who openly admit they’ve had some challenges,” Butler said. “I’ve also seen an organization who is optimistic and forward-leaning, and wanting to be better and improve.”

Butler echoed the sentiments of County Executive Bryan Hill, who in March said it was time for the department to move forward, after almost two years of scrutiny of sexual harassment on the job.

“We can spend but so much time looking in the rearview mirror of what has happened and what had happened in the past two or three years,” Butler said.

The Fairfax department came under extreme scrutiny in April 2016 after the disappearance and suicide of firefighter Nicole Mittendorff.

Despite the crude, sexualized online postings that stung Mittendorff, both her husband, Steve, and Nicole’s sister Jennifer Clardy Chalmers told WTOP they doubted the postings “caused” her suicide.

“Everyone is expected to be treated respectfully,” said Butler. In Howard County: “Some things we’ve done is focus on diversity recruitment, and obtained a minority majority class in the training academy. We also took some aggressive and progressive steps to make some promotions, and ended up with a majority minority senior staff.”

In his few visits to observe his future charges in action, Butler has simply observed — at one point sitting in his car with the windows down, watching.

“It was very impressive. At the recent women’s conference, to see women and men, doing the job and accomplishing the mission with optimism and positivity was promising,” said Butler, referring to the 2018 International Association of Women in Fire & Emergency Services conference that Fairfax County hosted.

While focusing on the future, Butler will likely inherit some unfinished business. In May, the American Civil Liberties Union filed an Equal Employment Opportunity Commission complaint on behalf of two female chiefs who said they were retaliated against for raising concerns about harassment.

Despite the scrutiny, reporting and lawsuits, Butler said he is looking forward to getting to work in Fairfax County.

“The solutions are not going to be independent and unilaterally coming from me,” said Butler. “We’re going to have to get together with the community, the organization, and get around a shared vision moving forward.”

Embracing the challenges ahead, Butler said the proud history of the Fairfax department will provide a strong backbone.

“Fairfax County Fire and Rescue has always been a trendsetter,” said Butler. “The challenges they’ve had in recent years can be resolved.”

As he prepares to begin his new position, with an annual salary of $202,000, and a commitment to developing a welcoming and inclusive work culture, Butler said leadership requires communication, candor and collaboration.

“I would be remiss if I didn’t think there’s been an impact on the public trust, [department] morale and some misdirection with regards to the mission,” Butler said. “Mission first, people always.” 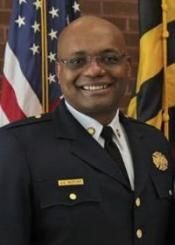