WASHINGTON — Fairfax County’s first-ever independent police auditor is about six months into the job and almost ready to release his first report. 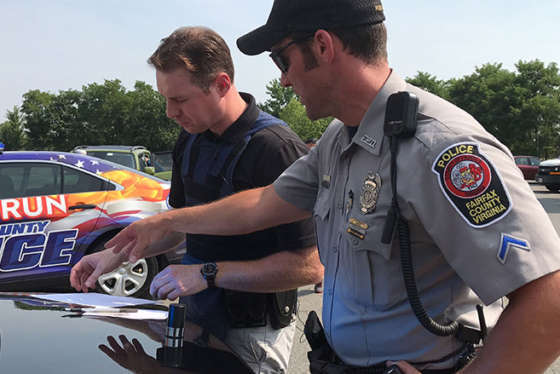 A day in the life of a Fairfax Co. police officer

WTOP’s John Aaron gets an up close look at the life and death decisions police officers make everyday. See video of his day.

Richard Schott, a 27-year veteran of the FBI, started in April and reports directly to the board of supervisors. He automatically reviews internal police investigations of officer-involved shootings, in-custody deaths, and use of force cases that result in someone getting seriously hurt or killed.

“For me, to monitor and review any other use of force that does not result in one of those situations, death or serious injury, then there has to be a complaint made by a member of the public regarding that use of force,” Schott said at a meeting this week in Alexandria.

It is the investigation into January’s officer-involved shooting death in Herndon that Schott will release a report on soon. A date has not been set for the release of that report.

In that case, the officer that shot and killed Mohammad Doudzai outside his townhome was cleared of any wrongdoing.

Instead of waiting until an investigation is over to review it, Schott follows its progress by communicating with Fairfax County police Chief Ed Roessler.

“If during the monitoring of the police investigation, if I have concerns … suggestions [or] recommendations, the mandate from the board says that I address those initially to the police department through the chief. And, if we have a disagreement, then I take that disagreement to the board. And then the board will resolve it one way or the other. And, again, that is as the investigation is ongoing,” Schott said.

“He can ask the questions in real-time so we’re not waiting six months, 12 months, and then all of a sudden he unloads with these questions. He has a wealth of experience. He’s unbiased. He’s outside. And we welcome that real-time constructive criticism,” Roessler said.

“Of course, what we hope is at the end, he’s going to say this was a very thorough, perfect investigation. But if there was a problem, he’s going to let us know, and that’s going to be in a public document that you’re going to be able to see. And then, if you don’t like how we react to it, then you have oversight over us,” Cook said.

The county also has a nine-member Police Civilian Review Panel, which has also been at work for about six months, that reviews completed investigations into accusations of misconduct or abuse of authority on the part of a police officer.

You can download or print a form that can be used to file a complaint with either the auditor or the panel here.