Cleanup crews in Fairfax County had their work cut out for them Friday after strong storms brought down trees and showered property in debris.
Listen now to WTOP News WTOP.com | Alexa | Google Home | WTOP App | 103.5 FM
(1/7) 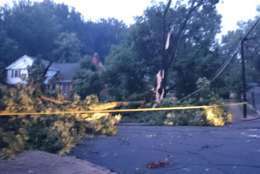 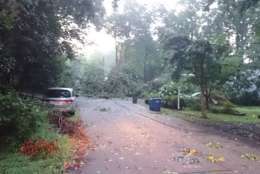 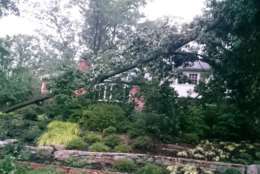 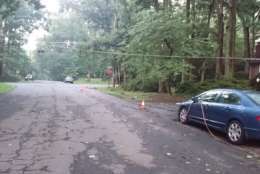 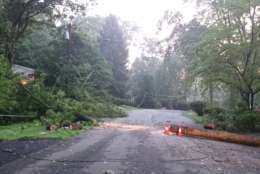 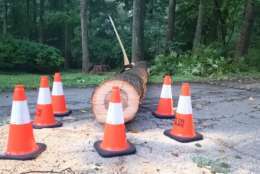 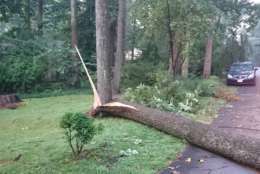 FALLS CHURCH, Va. — The cleanup continues in the Lake Barcroft area Friday morning after a strong storm Thursday brought down trees and power lines throughout the community.

Here are some images of Thursday’s severe weather shared by listeners (and by some of WTOP’s own).

“It’s about the strongest I’ve seen since I have been here in 40 years,” resident George Erikson told WTOP. “It’s the first time I ever went into the basement to wait it out.”

Many streets in the neighborhood are still covered in tree shrapnel from broken branches. Some streets remain blocked by downed trees.

Tree-clearing crews are making their way through the neighborhood to get the trees cleared. They will be followed by utility crews to replace power lines and cables.

Erikson said there were four large trees that were down on his property, including several that blocked the cart path down to his dock on the lake.

He was up early Friday to meet with the tree removal team to clear out those felled trees.

“Called him while the storm was going on!” Erikson said.

The damage wasn’t nearly as bad for others.

Ken Leventhal was in D.C. at the time of the storm but came home to large branches down all over his property.

“I didn’t anticipate and I was ultimately surprised by the force that must have been here,” said Leventhal. “It didn’t hit any cars and it didn’t break the roof.”

He is clearing most of the debris himself.

“Probably doing the easiest first quarter of just picking up leaves and loose debris,” he said. “My son will probably be over on the weekend and maybe we’ll get a saw.”

Leventhal noted that several roads were closed when he tried to get home Thursday from all of the damage left behind by the storm.

But overall, he’s grateful that it wasn’t any worse.

“Gotta be thankful that nobody was hurt and, in the end, the damage was not that crazy.”