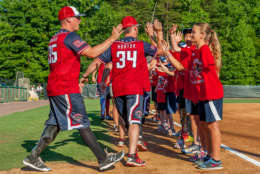 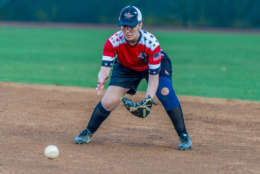 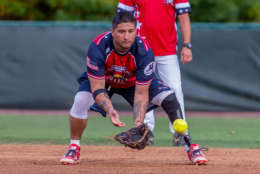 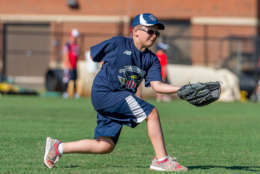 WASHINGTON — It’s a kids’ softball camp where the coaches are wounded warriors and the children face similar challenges. But this camp is about so much more than just softball.

This is the fifth year the Wounded Warrior Amputee Softball Team has held a softball camp for children ages 8 to 12 who are amputees. This year, 20 kids from across the country attended the weeklong camp at George Mason University in Fairfax.

Retired U.S. Marine Lance Cpl. Josh Wege is one of the coaches and mentors. He lost both legs below the knee from an improvised explosive device in 2009 in Afghanistan, just six months into his deployment serving as a military policeman. Wege has been awarded a Purple Heart and the Navy Achievement Medal.

He said the camp has helped more than 100 kids so far. Being able to do the camp for the last five years, he said, has been one of the biggest blessings in his life.

“We get to lead by example. That’s the unique part about this team. Everybody on my team is an amputee, as well,” said Wege. “We have something probably mom and dad don’t have — we can relate.”

He said that even if the kids never play softball again after the camp, if they are confident enough to go out and try new things, it’s a mission accomplished for the wounded warriors.

He said this camp is about teaching the kids how to adapt, overcome and “conquer their circumstance and not play the victim.”

“They get a lot of stares, they get a lot of comments. Maybe (by) some other kids who really don’t know what they’re looking at,” said Wege. “It’s going to hurt a little bit because you’re different. You have this label of disability. That’s a cloud over you.”

The kids’ camp was founded by three Fairfax County High School graduates. Bucky Weaver, who graduated in 1976, is one of the team coaches.

“As a team, we all look forward to the Kids Camp. To be able to witness the bond between the children and the wounded warriors is such an inspiration,” Weaver said in a news release. “This is truly a life changing experience for these kids as America’s heroes continue to serve their country in a special way.”

For the past  two years the kids camp has been held in the D.C.-area., but next year it will be held in New Hampshire.

The camp wraps up with the kids’ softball game Saturday evening at 5 p.m. at George Mason University.

Wege said the coaches are proud of the way the kids have shown so much heart and have grown this past week.

He said the kids get such a thrill when more people show up for the game. As the teams are introduced Saturday evening, the kids have their names read out loud while their picture is up on the big screen.