The Fairfax County School Board is scheduled to decide next month whether J.E.B. Stuart High School, named after a Confederate general, should get a new name.
Listen now to WTOP News WTOP.com | Alexa | Google Home | WTOP App | 103.5 FM

FALLS CHURCH, Va. — The Fairfax County School Board is scheduled to decide next month whether J.E.B. Stuart High School, named after a Confederate general, should get a new name.

The issue has been discussed for several years, and there was more back-and-forth about it at a sometimes testy meeting Thursday night at the school.

Last year, the school board established an ad hoc committee made up of people both within and outside the school community to consider a name change.

From that, two subcommittees were formed, one to gauge public support for changing the name, the other to collect arguments for keeping the name. 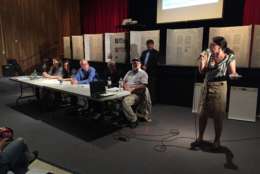 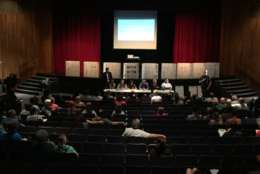 Other people said those people stayed away because they felt threatened.

The meeting promised presentations by those both for and against a name change, and there were handouts detailing arguments by both sides.

But there were significantly more presenters and audience comments in favor of giving the school a new name.

“I run track and every Tuesday and Thursday I walk into the weight room to see a giant mural of J. E. B Stuart painted on a wall in front of me. He’s portrayed like a hero with bulging muscles, a powerful pose, regal face, and red white and blue flowing behind him,” said Julia Clark, a sophomore at J.E.B. Stuart High.

“This sends a message to me that General Stuart and what he fought for is deemed heroic and patriotic. My ancestors being bought and sold like cattle is OK, because J.E.B. Stuart was a patriot,” she said. “We’re such a diverse school, so why isn’t our name something we’re proud of? Something that celebrates our diversity instead of dividing us?”

A member of the ad hoc committee had a different perspective of the name and its meaning.

“We’ve done some focus groups around the school … there was a survey done by an outside group. Ninety percent of the kids know nothing about J.E.B. Stuart,” said Andre Billeaudeaux. “J.E.B. Stuart is the most moderate, balanced confederate officer there is.”

Billeaudeaux wants to find a solution “that meets everybody’s needs, expanding the historic capacity of this school to include heroes of many different races, cultures and ethnicities.”