A sheriff’s deputy shot a man who was threatening him with a sharp signpost, and had already injured a security guard, near the main building of Inova Fairfax Hospital on Monday night, the police said.
Listen now to WTOP News WTOP.com | Alexa | Google Home | WTOP App | 103.5 FM
(1/3) 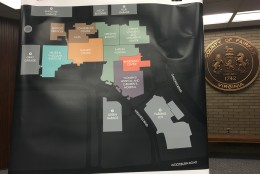 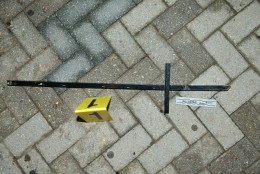 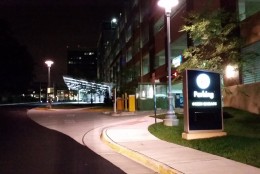 WASHINGTON — The man who was shot dead by a sheriff’s deputy on the campus of Inova Fairfax Hospital on Monday night had just been released from the hospital, was having “what appears to be a mental episode” and had already injured a security guard with a sharp-pointed signpost, the Fairfax County police said Tuesday.

The man, whose name was not released pending notification of next of kin, died after being shot by a deputy who had been on the campus helping to guard a prisoner, Sheriff Stacey Kincaid said at a news conference Tuesday morning.

Fairfax County Police Chief Edwin Roessler said in the news conference Tuesday morning that after the man released, security guards helped him to a bus stop outside the Green Garage. Just before 10 p.m., however, security got two calls reporting a man with what appeared to be a weapon — a signpost with a sharp edge on the bottom, Roessler said.

The security guards returned to the bus stop, but the man hit one with the sign, injuring him. At that point, two 911 calls went out.

Meantime, Fairfax County Sheriff’s Office deputies were at the hospital, guarding a prisoner from the Adult Detention Center who was getting medical attention, said Kincaid. One of the deputies headed to the bus stop, while Fairfax County police were on the way.

The deputy tried to negotiate, Roessler said, but the man raised the post and began charging at him. The deputy had his gun drawn and was trying to retreat, Roessler said. The deputy shot the man what appears to be multiple times, then the deputy and police officers, who had arrived, tried to revive him until medical personnel took him to the emergency room, where he died.

Police had originally said the man’s wounds were not life-threatening; Roessler couldn’t shed any light on the discrepancy.

Roessler described the man as 29 years old and Hispanic; he said he didn’t know whether the man spoke English, or the deputy spoke Spanish.

Kincaid did not identify the deputy, but said his name will be released soon. She said he had been a deputy for 18 years. Roessler said the deputy had had Crisis Intervention Team training.

The deputy has been placed on administrative leave, which Kincaid called routine.

The security guard was treated for his injuries and released.

Asked whether the deputy should have waited until police arrived to begin talking with the man, Roessler said it was “absolutely appropriate.” Police and sheriffs “go to the same academy,” Roessler said, and deputies “have full law enforcement authority.”

The police are conducting a criminal investigation, while the sheriff’s office is determining whether all of its policies were followed.