As many as a score of people climbed out of their cars on the George Washington Memorial Parkway Tuesday evening to help pull out victims of a shuttle bus crash and right the overturned bus, according to one witness.
Listen now to WTOP News WTOP.com | Alexa | Google Home | WTOP App | 103.5 FM

WASHINGTON — More than a dozen people climbed out of theirs cars on the George Washington Memorial Parkway Tuesday evening to help pull out victims of a shuttle bus crash and right the bus that had overturned on the side of the road, according to one witness.

“It was pretty amazing,” said James Joyner, a professor at the Marine Corps Command and Staff College in Quantico, who was driving behind the bus in the Mount Vernon area at the time of the wreck. The head-on collision caused the bus to tip over.

Joyner estimated that 18 to 20 people got out of their cars to help, and that the group included at least three military service members in uniform.

Joyner says they were unable to get the emergency exit at the rear of the bus open. Some passengers were helped out of the top of the bus, but others apparently remained trapped.

“The next thing I know people were trying to lift the bus” to put it back on its wheels, he says. “I thought that was a fiasco waiting to happen. But it worked.”

Joyner was relaying information to a 911 dispatcher as the group set the bus upright. He calls the scene horrific, with passengers showing serious wounds.

The car that struck the bus was a silver Mini Cooper, according to police. The cause of the crash, near the intersection with Stratford Lane, remains under investigation.

A passenger on the bus was killed. In all, 15 people were injured, including the two occupants of the Mini Cooper. The bus was carrying visitors from China.

A park police spokesperson said the site of the crash is not a spot where they usually see crashes on the parkway and called the collision a “rare occurrence.”

However, park police recently told NBC Washington that speeding on the southern end of the parkway has been a concern. 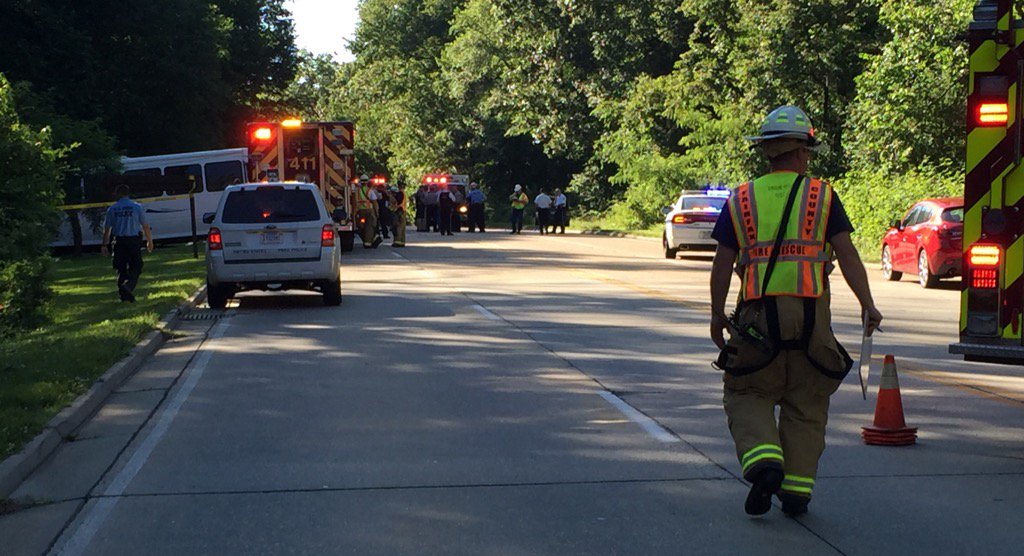