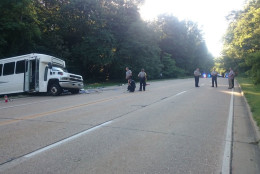 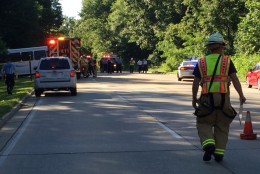 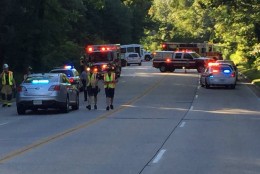 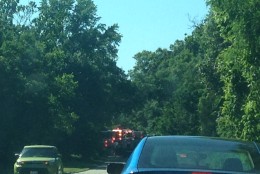 WASHINGTON — One person died and multiple people were injured in a crash involving a shuttle bus that closed the George Washington Parkway in both directions in Mount Vernon Tuesday evening.

A shuttle bus driving northbound on the parkway near Stratford Lane crashed head-on into another vehicle at about 5 p.m. U.S. Park Police say the bus tipped onto its left side and slid off the roadway, trapping people underneath.

There were a total of 21 people involved in the crash — 18 bus passengers, one bus driver and two people in the other vehicle, said Sgt. Anna Rose with the U.S. Park Police.

Two people are still in critical condition as of 11 a.m. Wednesday, the Park Police said.

Rose said several passersby, some possibly members of the military, stopped at the scene and lifted the bus back onto its wheels. Also, she said the passersby administered aid to the injured until emergency personnel arrived. She called them “heroic people” who the agency is working to identify.

The driver and passengers on the bus are all Chinese citizens, according to U.S. Park Police.

While it is not yet clear which company was using the shuttle bus, Fairfax County police asked family members of those who may have been involved in the crash to go to their Mount Vernon Police station at 2511 Parkers Lane, in Alexandria, Virginia.

The GW Parkway was closed in both directions for several hours. All lanes reopened around 1:20 a.m. Wednesday.