MADRID (AP) — Politicians and experts met in Madrid on Friday to discuss ways to tackle drought and the increasing spread of deserts across the globe.

“The consequences of drought can affect up to three quarters of humanity by 2050. There is nowhere to hide if we are unable or unwilling to avert the severe alterations we are inflicting on the planet,” Ibrahim Thiaw, executive secretary of the U.N. Convention to Combat Desertification, or UNCCD, said at the opening of the meeting.

“Let us be prepared to confront the new reality,” he added.

The half-day meeting is being held to mark the United Nations’ World Day to Combat Desertification and Drought.

Thiaw said half the world population was expected to face severe water scarcity in the next eight years, adding that that could lead to as many as 700 million people — or about 10% of the world’s population — being at risk of being displaced during that period.

The meeting brought together numerous experts, including Kenya’s Patricia Kombo, founder of the PaTree Initiative to help Kenya achieve 10% forest cover by getting students to plant trees.

“I know majority of you have never come across drought,” said Kombo. “But I would like to tell you how drought feels like. Clean and safe drinking water is like a diamond. Three meals a day is a dream.”

She said communities had turned to violence because of the lack of food and water.

Spanish Prime Minister Pedro Sánchez spoke at the meeting and U.N. Secretary General António Guterres was to make an address by video.

The UNCCD says that between 1900 and 2019, droughts have impacted 2.7 billion people in the world, and caused 11.7 million deaths.

Spain’s Ecological Transition ministry says 75% of Spanish land is vulnerable to desertification and this is increasing.

The meeting comes as Spain is suffering an unusually early heat wave that has helped fuel wildfires across the country.

The focus of the meeting will be on encouraging early action to prevent disastrous outcomes. 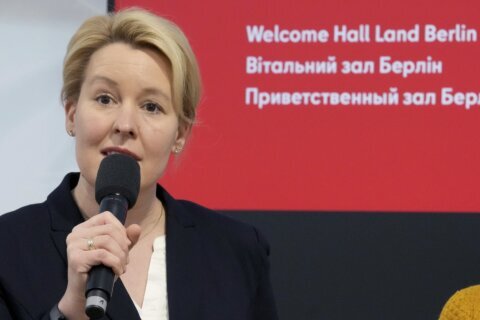