BERLIN (AP) — Police raided homes and offices in northern and western Germany on Tuesday as part of an investigation into a case involving five men accused of fraudulently applying for 26 million ($28 million) worth of pandemic-linked aid.

The German government drew up a series of aid packages to help businesses withstand the impact of lockdowns and other restrictions at the height of the coronavirus pandemic.

The suspects in this investigation — men aged 26 to 62 — are suspected of making at least 363 aid applications under false pretenses “for their own purposes and for companies that commissioned them,” according to a police statement. It’s believed to have resulted in a loss of several million euros, it added.

The investigation was launched in April 2020 after a development bank in the northern state of Lower Saxony reported suspicious activity. Twenty-five properties were raided on Tuesday, including the five suspects’ homes, but police said there were no arrests. They froze assets totaling 3.5 million euros, seizing cash and expensive watches.

In a separate case, a 20-year-old man was on Monday convicted of fraud in the southwestern city of Freiburg for taking 5.7 million euros from a doctors’ association last year for a test center he never opened, German news agenc dpa reported.

A bank later returned the money.

The court will decide after a year’s probation whether to impose a sentence under juvenile law. He was ordered to pay 1,500 euros to charity and cover the costs of the proceedings, dpa reported. 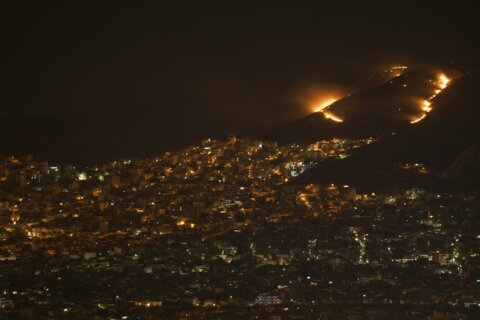 EU warns of dire climate season ahead with droughts, fires