It was a shocking night last night at the 94th annual Academy Awards in Los Angeles.

“CODA” completed its underdog knockout of “The Power of the Dog” to win Best Picture, but it was overshadowed by an actual “smack heard round the world” as Will Smith got out of his seat to slap Chris Rock on stage for joking about his wife, Jada Pinkett Smith.

“Oh wow, Will Smith just slapped the sh*t out of me,” Rock said.

“Keep my wife’s name out your [bleeping] mouth!” Smith yelled twice from his seat.

A teary-eyed Smith addressed the outburst when he won Best Actor for “King Richard.”

“Richard Williams was a fierce defender of his family,” Smith said. “I want to apologize to the Academy. I want to apologize to all of my fellow nominees. Love will make you do crazy things. … Denzel said to me a few minutes ago, ‘At your highest moment, be careful, that’s when the devil comes for you.’ … Thank you, I hope the Academy invites me back.”

It was a moment we could have hailed Smith as only the fifth Black actor to win Best Actor, joining Sidney Poitier, Denzel Washington, Jamie Foxx and Forest Whitaker, the crowning achievement after “Independence Day,” “Men in Black,” “Ali” and “The Pursuit of Happyness.” Instead, it made everyone forget he was even there for “King Richard.”

“This is for the Deaf community, the CODA community and the disabled community,” Kotsur said, signing from the stage. “This is our moment.”

This entire awards season, pundits deemed the esoteric “The Power of the Dog” the front-runner, but I’ve had a gut feeling about the Sundance underdog “CODA” since giving it a 5-star rave review in August and naming it my No. 1 movie of the year in late December.

How did I know “CODA” would land the upset?

Second, “CODA” took a distribution route that’s less threatening to Hollywood’s model. Academy voters decided they would rather embrace “CODA,” which was independently made, premiered traditionally at a film festival and was purchased for distribution on a streamer, rather than “The Power of the Dog,” which was originally produced by Netflix.

Finally, word-of-mouth. It’s one thing to review films for cinephile magazines and Twitter echo chambers. It’s another to recommend movies to mainstream listeners on WTOP and hear their feedback. “CODA” was the one movie I could recommend to anyone (family, friends, fellow critics) where they all came back raving (until it threatened your Oscar pool).

In the end,” CODA” entered the night tied for the lowest number of nominations (3) and managed to upset the film with the most nominations, “The Power of the Dog” (12).

The Netflix western wound up winning only one award on the night, but that one win was a major milestone, as Jane Campion became just the third woman ever to win Best Director and the second back-to-back after Chloe Zhao won last year for “Nomadland.” Campion got revenge on Steven Spielberg after “Schindler’s List” topped “The Piano” (1993).

“I love directing because it’s a deep dive into story, yet the task of manifesting a world can be overwhelming,” Campion said in her speech.

Jessica Chastain won Best Actress for “The Eyes of Tammy Faye” exactly 10 years after she should have won for “Zero Dark Thirty” (2012) as “the mother [bleeper] who found bin Laden.” She dedicated her win to suicide victims, particularly in the LGBTQ+ community.

That community includes Ariana DeBose, who won Best Supporting Actress for Spielberg’s remake of “West Side Story,” becoming the first queer woman and second Latina ever to win after Rita Moreno won for the same role in the classic 1961 Best Picture winner.

“You see a queer woman of color, an Afro-Latina who found her strength in life through art — and that’s what I believe we are here to celebrate,” DeBose said in her speech.

Speaking of which, a special 50th anniversary tribute to “The Godfather” brought Francis Ford Coppola, Al Pacino and Robert De Niro out on stage to roaring applause.

It was preceded by a special 60th anniversary tribute to James Bond, a prolific franchise that saw Billie Eilish & Finneas win Best Original Song for “No Time to Die.”

The win prevented Lin-Manuel Miranda from becoming an EGOT (Disney shot itself in the foot by submitting “Dos Oruguitas” instead of pop-culture phenomenon “We Don’t Talk About Bruno”). However, “Encanto” won Best Animated Feature over stiff competition.

Why should he? Most of the technical categories were presented during a controversial hourlong preshow where the winners were filmed ahead of time and highlights shown during the live broadcast. Ironically, the broadcast still ran over three hours, time you could have spent watching Japan’s “Drive My Car,” which won Best International Feature.

All the while, the trio of hosts, Wanda Sykes, Amy Schumer and Regina Hall, spit jokes like, “You know what’s in the In Memoriam this year? The Golden Globes.”

The Oscars have themselves been on life support in recent years. Last year’s ratings fell to a record low of 9.85 million viewers, a nearly 59% percent drop from the 23.6 million viewers that tuned in the previous year, according to Nielsen.

We’ll have to wait and see how many folks tuned in to see Smith smack Rock.

It’s the one thing that none of us could have predicted.

Predicted. Them. All. #Oscars https://t.co/QaBejk6O2R 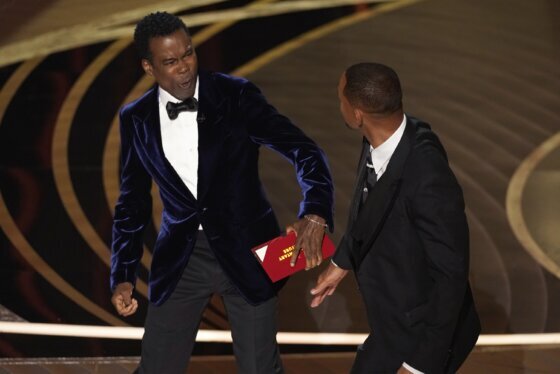 LOS ANGELES (AP) — After a movie year often light on crowds, the Academy Awards named an unabashed crowd-pleaser, the…