The event was held at the Staples Center in Los Angeles, where NBA star Kobe Bryant captained the Lakers for 20 years before dying in a helicopter crash Sunday at age 41.

“Here we are together on music’s biggest night, but to be honest with you, we’re all feeling crazy sadness right now because earlier today, Los Angeles, America and the whole wide world lost a hero,” host Alicia Keys said. “We’re literally standing here heartbroken in the house that Kobe Bryant built.”

Keys next joined Boyz II Men to sing “It’s So Hard to Say Goodbye to Yesterday” as tears fell in the audience and the camera showed Kobe’s retired jerseys in the rafters.

“I’m Alicia Keys and I’m going to get you through,” Keys promised at the piano.

Thus, the show was an attempted escape from the day’s tragic news.

Lizzo kicked off the show shouting, “Tonight is for Kobe!” While Lizzo won Best Pop Solo Performance for “Truth Hurts,” she was shut out from wins in the major categories despite a leading eight nominations.

“I feel like I joke around a lot and I never take anything seriously at these kind of things, but I genuinely want to say I’m so grateful,” Eilish said. 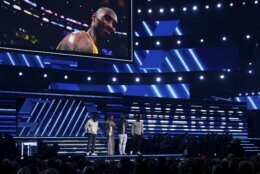 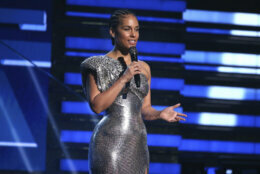 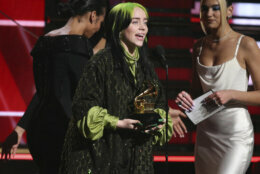 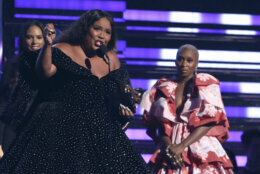 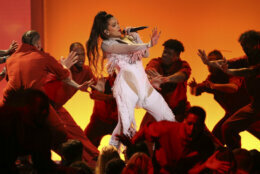 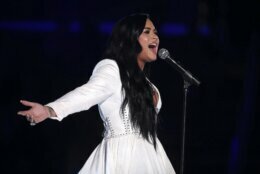 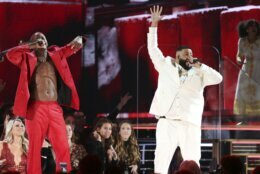 The best performance came from Camila Cabello, who sang “First Man” to her teary-eyed father in the audience, singing, “You were the first man who really loved me.”

Equally emotional was Demi Lovato, who cried singing “Anyone,” which she wrote just days before her drug overdose last summer.

Fans of all genres enjoyed Aerosmith and Run DMC performing “Walk This Way,” the song that broke down the wall between rock and hip-hop forever. It was fitting for Aerosmith, who was named the Grammys’ 2020 MusiCares Person of the Year.

“So I say this with love to the Grammys, because you really need to know this, every year y’all be killing us man,” Combs said. “Man, I’m talking about the pain. I’m speaking for all these artists here, the producers, the executives. The amount of time it takes to make these records, to pour your heart into it, and you just want an even playing field.”

He was referring to behind-the-scenes turmoil leading up to the event. Just 10 days prior, Recording Academy C.E.O. Deborah Dugan was ousted for misconduct, causing Dugan to fire back with claims that the awards show is rigged with conflicts of interest.

You could see similar frustration from Keys after the Eilish sweep on Sunday.

“We must do better,” Keys said as the program left the air.

The top 10 movies on the iTunes Store