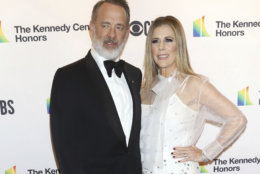 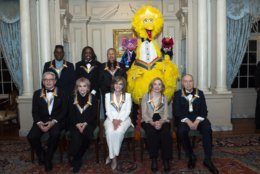 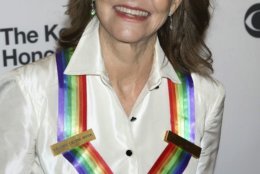 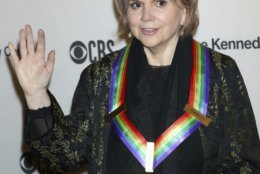 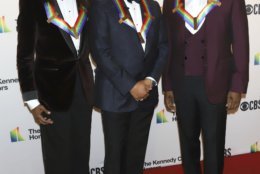 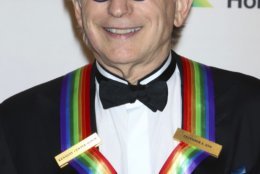 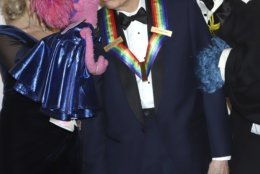 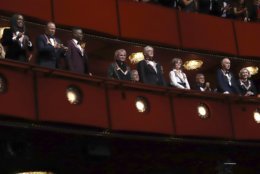 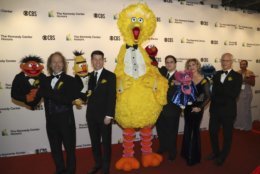 The nation’s capital hosted its most star-studded event of the year on Sunday night.

Host LL Cool J kicked off the show by thanking all of the honorees.

“Thanks for reminding us that as a nation, we need to stick together,” LL Cool J said.

Here are highlights from each of the five nominees:

The first honoree was Linda Ronstadt for her range of rock, folk, country and Americana.

Don Henley took the stage to describe how he and Glenn Frey got their start as backup musicians for Ronstadt before forming their own group, The Eagles. He fondly recalled Ronstadt covering the first song they wrote together, “Desperado.”

“Outwardly, she had a youthful vulnerability, but on the inside she was a powerful and determined woman who knew where she was going,” Henley said.

Carrie Underwood took the stage to perform two of Ronstadt’s biggest hits, “Blue Bayou” and “When Will I Be Loved?”

Kevin Kline shared his own memories of starring with her in “The Pirates of Penzance.”

“She had an operatic voice so pure that it brought tears to our eyes,” Kline said. “She was down to earth, self-deprecating, charming, smart, extraordinarily literate, un-diva like, one of the gang and unfailingly authentic.”

Latin Grammy winners Flor De Toloache performed next, followed by remarks from Emmylou Harris, who collaborated with Ronstadt and Dolly Parton on “Trio.”

“She had the most stunningly beautiful voice of our generation,” Harris said. “She was a fierce artist who set the bar high for the rest of us.”

The Ronstadt section wrapped with Trisha Yearwood singing “You’re No Good” and a chilling duet with Aaron Neville of “I Don’t Know Much.”

Sally Field was the second honoree, complete with a clip package of “Gidget,” “The Flying Nun,” “Sybil,” “Smoky and the Bandit,” “Norma Rae,” “Places in the Heart,” “Steel Magnolias,” “Mrs. Doubtfire,” “Forrest Gump” and “Lincoln.”

Steven Spielberg took the stage to describe how he didn’t initially want to cast her as Mary Todd Lincoln in “Lincoln,” but Field was persistent and proved him wrong.

“She said, ‘Steven, you’re wrong.’ I don’t hear this very often,” Spielberg said. “The next day, she calls and says, ‘I’ve never asked you for anything, but please just test me.’ [We did] and Daniel Day-Lewis was spellbound. We just couldn’t contain ourselves. What we had experienced was the reincarnation of Molly Lincoln.”

Next, Moira Tierney took the stage to recall Field playing her mother on “E.R.”

“She was a tempest with a gorgeous head of hair,” Tierney said.

Pierce Brosnan came out to share memories of “Mrs. Doubtfire.”

“Sally and I were united by the cyclone of Robin Williams,” Brosnan said. “I have fond memories of ‘Mrs. Doubtfire,’ [including] Robin throwing a lime at the back of my head in the infamous ‘drive-by fruiting.’ Sally, I love you and I always will.”

“Forrest could only operate at the speed of his common sense and what his mother told him, and that was Sally,” Hanks told WTOP on the red carpet.

“She’s an artist of the highest expertise on stage, television, screen and life,” he added.

Field spoke with WTOP on the red carpet about her iconic scene in “Norma Rae,” where she climbed on top of her textile factory table and held up a sign reading, “Union.” What would that sign read today?

“‘Union,'” Field said. “In all respects. All of us. We need to come together. We are the United States. There are more important things than what camp we belong to.”

The third honoree was the cast of “Sesame Street,” the first TV show to be honored.

“The letters of the day are ‘K’ and ‘C’ for ‘Kennedy Center,’ obviously,” star Sonia Manzano told WTOP. “‘Sesame Street’ revolutionized television, so it should be honored.”

Big Bird did not grant interviews, but strutted down the Kennedy Center lobby.

How about Oscar the Grouch?

“He’s just as grouchy off screen as he is on screen and he happens to be my very most favorite character,” Manzano said. “He’s so nuanced and I never know if I’m talking to a 48-year-old or an 8-year-old, so it’s always interesting.”

Cookie Monster even eyed up microphones on the red carpet.

The cast was stunned by Sunday’s passing of Carroll Spinney, the original Big Bird.

“Carroll Spinney was the sweetest man ever born,” Manzano said.

“He really infused that character with his sweetness, and I think that’s why the bird is so popular and why he will always be with us. It’s stunning to me that he would pass on this particular day. It’s very eerie and I just found out about it a few hours ago. We’re of course heartbroken about it, but I can say he will live on through that character.”

During the ceremony, Lucy Liu was the first “Sesame Street” presenter.

“On Nov. 10, 1969, the medium that had just broadcast man’s footsteps on the moon broadcast another type of innovation,” Liu said.

“The groundbreaking series landed with a singular purpose to make kids smarter and kinder, taking us to a place where the air is clean, with characters who loved simple things in life like cookies and trash, where rubber duckies were the one and it wasn’t easy being green.”

Big Bird came into the audience looking for someone named “Thanks.” Turns out, he was looking for “T-Hanks,” as in Tom Hanks, sitting on Hanks’ lap.

Elmo and Abby appeared on stage with Cedric the Entertainer, who said “Sesame Street” taught us how to count by quoting The Count’s famous “Ah, ah, ah!”

“When I was little, ‘Sesame Street’ made me laugh, sing, dance and learn,” Gordon-Levitt said. “Now I’m a dad and my kids love it so much.”

It ended with the entire cast singing a goosebumps-inducing rendition of “Sing a Song.”

After a brief intermission, the next honoree was maestro Michael Tilson Thomas, conductor of the San Francisco Symphony and a third-generation artist.

“When I was a little boy, I used to get taken on the set of John Ford westerns. I can’t remember which ones, but they were all around Monument Valley. It was paradise for an 8-year-old.”

During the ceremony, Metallica drummer Lars Ulrich took the stage to praise Thomas, who conducted a recent collaboration between Metallica and the San Francisco Symphony.

“That rock and classical overlap was the most exhilarating and creatively rewarding of my career,” Ulrich said. “He can talk about a piece from 500 AD as passionately as a hard rock anthem. He can recite that the B-flat note is 3,729 vibrations per second.”

Next came 30 years of alumni from the New World Symphony, which Thomas founded. They performed classical selections ranging from Aaron Coplan to Igor Stravinsky.

Debra Winger took the stage to describe his 1990 collaboration with Audrey Hepburn inspired by “The Diary of Anne Frank.”

“He has a contagious, childlike exuberance,” Winger said.

Audra McDonald performed Leonard Bernstein’s “Some Other Time” from “On the Town” and “Somewhere” from “West Side Story.”

She returned to the stage to perform George Gershwin’s “I Got Rhythm” from “An American in Paris.”

The fifth and final honoree was Earth, Wind & Fire.

Grammy-winning songwriter David Foster took the stage to describe penning “After the Love Is Gone,” beginning a long collaboration with the group.

John Legend wowed the audience with his rendition of “You Can’t Hide Love.”

David Copperfield shared how the band was the first to incorporate magic into live shows.

Next, Ne-Yo danced the night away to “Shining Star” and “Sing a Song.”

The Jonas Brothers next came out to sing “Boogie Wonderland.”

Finally, everyone came on stage to sing and dance to “September.”

The band accepted the award without the late Maurice White, who stopped performing with the group due to Parkinson’s decades ago before his death in 2016.

“You can’t play an Earth, Wind & Fire song or anything related to that without Maurice’s DNA,” Bailey said. “He was the conceptualizer, the brainchild of anything. We’re very proud to have taken on that legacy for over 30 years without him.”

He said the band always tried to keep a positive vibe to their music.

“This culminates the success of us bringing people together and making an impact on the culture,” Bailey said. “Our music and the lyrics in our song, the genres of music we collected to put together, the commerciality, the message in the music has always been positive, uplifting and it has stood the test of time. We’re very proud of that.”